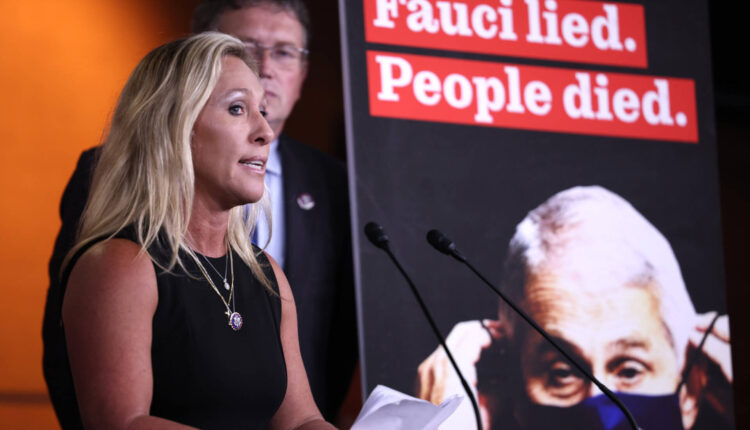 There’s really no more apt embodiment of the deadly, gleeful ignorance that’s marked the pandemic than obnoxious, honking anti-vaxxers showing up to protest Dr. Anthony Fauci’s commencement for 2020 University of Michigan graduates who had their lives turned upside down.

Fauci, the director of the National Institute of Allergy and Infectious Diseases, had an erudite response to the planned disruption featuring GOP politicians.

“Sadly, elements of our society have grown increasingly unfazed by a cacophony of falsehoods and lies that often stand largely unchallenged, ominously leading to an insidious acceptance of what I call the ‘normalization of untruths,’” he said Saturday afternoon.

At this point, most folks have become numb to the fact that more than 36,000 of our friends and neighbors in Michigan have died of COVID-19. If you asked people whether they were aware that the United States was on the cusp of hitting 1 million COVID deaths, the answers would, no doubt, be interesting — and probably frightening.

There likely would be plenty of denial, not to mention variations of comments similar to anti-vaxxers’ signs that “Fauci killed my mom.” It’s easier for some people to believe QAnon fever dreams that one of the world’s foremost infectious disease experts is part of a Hollywood-government cabal killing people instead of a new, ever-mutating virus. And naturally, they believe life-saving, well-tested vaccines — that have been proven over and over to prevent severe illness and death — are worse than the disease itself.

There will always be a segment of the population that falls for these sort of savage, conspiracy-fueled delusions. Anti-intellectualism is on the rise. Society has been torn apart for over two years, with work, school and social lives being interrupted and upended (for most) during each new COVID wave (although lessening every time). Fear and isolation are the perfect fuel for violence, conspiracies and radicalism.

But what’s made this time even more tragic and dangerous is that far-right leaders saw the pandemic as a prime opportunity to exploit vulnerable people. It’s no coincidence that your aunt went from sharing photos on Facebook of masks she was sewing for overworked hospital staff in March 2020 to now posting screeds about evil doctors willfully poisoning patients with COVID vaccines.

We’ve had GOP leaders from former President Donald Trump on down spreading deadly misinformation that COVID will just magically disappear or you should drink bleach or ingest horse-dewormer or any number of other bat-poop crazy ideas that culminated in a quarter of the population rejecting vaccines — our best defense against the virus.

Fear and isolation are the perfect fuel for violence, conspiracies and radicalism. But what’s made this time even more tragic and dangerous is that far-right leaders saw the pandemic as a prime opportunity to exploit vulnerable people.

All of that sends the message to millions of people not to trust scientists, nurses and doctors telling you to mask up and get the shot, because there’s so much conflicting advice. Especially now that we’re more than two years into the pandemic, everyone is exhausted.

And virtually no one states the obvious anymore: The pandemic never had to be this long, this uncomfortable or this deadly if more people would have taken basic precautions at the beginning to stay home, socially distance and wear masks. And since we’ve had safe, free and effective vaccines for more than a year, very few people should be dying now.

But because an intractable minority of Americans refuse to take simple steps to save their lives and the lives of others — especially seniors, immunocompromised people and disabled people — we’ve had about a quarter-million people die needlessly in the last year.

That kind of loss is incomprehensible. And we’ve never really taken time as a nation to undergo a mass grieving process — something we all need, even those living in dangerous denial. We have lost parents, grandparents, friends and children. There are thousands of kids who have been left orphaned.

Anyone who tells you this is less important than kids having the “freedom” — such a perverted term — not to wear masks in schools is morally bankrupt. And they sure as hell aren’t “pro-life.”

Perhaps the most sickening development has been COVID deniers making those who are trying to save lives and make our lives better during the pandemic targets for hatred and violence. Prominent leaders like Fauci and Gov. Gretchen Whitmer have had to vastly increase their security because of a barrage of death threats.

State lawmakers, local public health officials and school board members who have taken action to save lives with mask and health policies also have been subjected to public ire and threats. None of them thought they’d need to hire bodyguards to do their jobs. The U.S. Capitol is centered among the “Field of Flags” at night during the 59th Presidential Inauguration in Washingtion, D.C. The Field of Flags represents the victims of COVID-19. | CBP via Flickr Public Domain

But you don’t even have to be in a public role to have your safety threatened. What does it say about us as a country when teachers trying to make sure that kids are staying healthy and doctors who have been tirelessly working to save lives for more than two years are harassed and terrorized by mobs as they go into work? How can we say we’re a civilized society when health care workers are spat on and assaulted by patients and family members in COVID wards?

There’s been a lot of debate in the media about what the Republicans stoking this anger and deception truly believe. Is this just a cynical scheme to rile up the base or do they really believe that drinking urine is more effective than vaccines?

I would argue that it doesn’t matter. Surely some politicians are just doing a long con, but other Republicans like U.S. Rep. Marjorie Taylor Greene, known for spreading conspiracies that Jewish space lasers cause wildfires, seem awfully convincing in their crazy high-wire act.

But the end result is the same: more societal division, more disinformation and more death. Just remember, it never had to be this way.

Warming week with 80s in sight

Eicher family does some spring cleaning and gardening