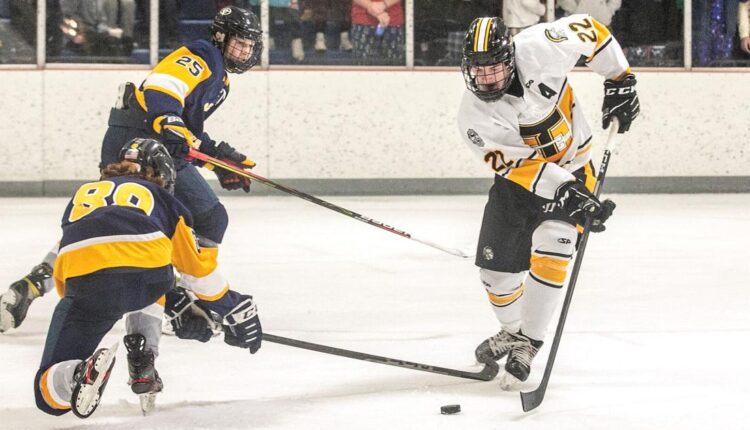 TRAVERSE CITY — The Traverse City Central hockey team had a lot to be thankful for Wednesday after a dominating season-opening performance.

The Trojans (1-0) showcased to the Howe Arena crowd how appreciative they are to be back on the ice by slashing a short-handed Gaylord (0-2) team 13-0.

That win extends their winning steak against the Blue Devils to eight, dating back to the 2017-18 season.

“We’ve beaten Gaylord in the past, but we typically don’t have an easy time with them,” TC Central coach Chris Givens said. “I think tonight again was a matter of them having some key guys out of the lineup and being short-handed. … We’ve had some success against them, but it’s nothing that has come easy.”

Goalkeepers Brady Faille and Kiel Knapp shared the shutout as the Trojans held the Blue Devils to only three shots on goal — all in the first period. The game was called after the second period by the mercy rule.

The Trojans outshot the Blue Devils 44-3, but there is always something that Givens can see improvement.

“Tonight, we had some unforced giveaways that we need to cut down on,” he said. “I thought we missed a couple of assignments coming back into the zone where they had two scoring chances where we didn’t pick people up coming back, but again the first game of the year, that’s expected that you’re going to have some of those mistakes.”

For Givens and his team, there weren’t much nerves but just excitement to get back onto the ice. As much as a team can practice against each other, it matters when they can showcase it against opponents.

“I was excited to get there, and finally after all the practice we had in November, get to see the guys out against someone else instead of beating each other up in practice,” Givens said. “I could tell in the locker room before the game, mainly some of the first-year players were a little bit nervous.”

TC Central’s next conference matchup is Nov. 30 against the 2022 Big North champion Petoskey at Howe Arena.

The Trojans have Thanksgiving off but will be back on the ice on Friday and Saturday for the Cathy Buchanan Memorial Showcase at Center Ice Arena. TC Central faces East Grand Rapids at 8 pm Friday, then Northville at 1 pm Saturday.

What to expect for Thanksgiving, Black Friday in Metro Detroit