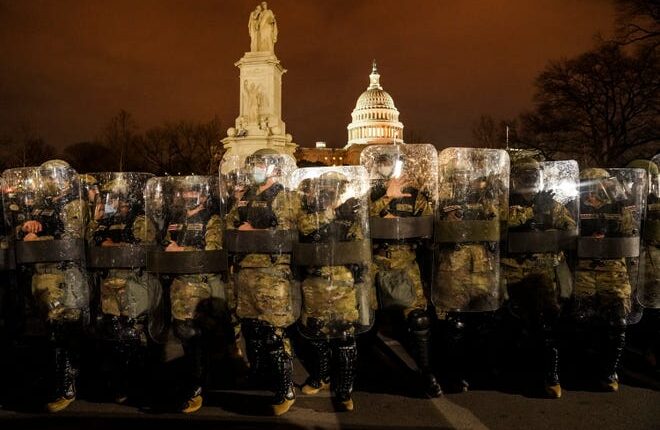 A Traverse City man was arrested Thursday for his alleged role in the Jan. 6 insurrection in Washington DC, where authorities say he fought with police as he made his way through a tunnel at the nation’s Capitol.

Luke Michael Lints, 27, joins more than a dozen other Michiganders who have been charged in the US Capitol attack, including Michigan GOP gubernatorial candidate Ryan Kelley, who was arrested three weeks ago on misdemeanor charges.

Investigators allege Lints was among a mob of rioters who were trying to get inside the Capitol to disrupt the joint session of Congress assembled to certify President Joe Biden’s victory.

According to the Department of Justice, Lints held a police shield and pushed back against law enforcement officers, at one point using the shield to prevent an officer from closing a door to protect himself from the rioters.

Investigators said Lints entered the tunnel on the Lower West Terrace at approximately 3:10 pm that day and made his way toward the front of the police line. Lints also was part of the crowd directly outside the tunnel as a Metropolitan Police Department officer was being assaulted by rioters, prosecutors allege.

Lints, who was identified as #261 on the federal government’s seeking

information photos, was charged in federal court with civil disorder, a felony, and misdemeanor offenses.

He was arrested in Traverse City and made his initial appearance Thursday afternoon in federal court in Grand Rapids, where he was released on bond. He’s scheduled to return to court for a hearing July 5.

His court-appointed attorney could not be reached for comment.

Lints’ arrest comes almost three weeks after the FBI raided the Allendale home of Kelley and arrested him on charges related to the 2021 riot at the US Capitol.

According to the Department of Justice, in the 17 months since the Capitol breech, more than 800 people across the country have been arrested for crimes relating to the attack, including more than 250 people who allegedly assaulted or impeded police officers.