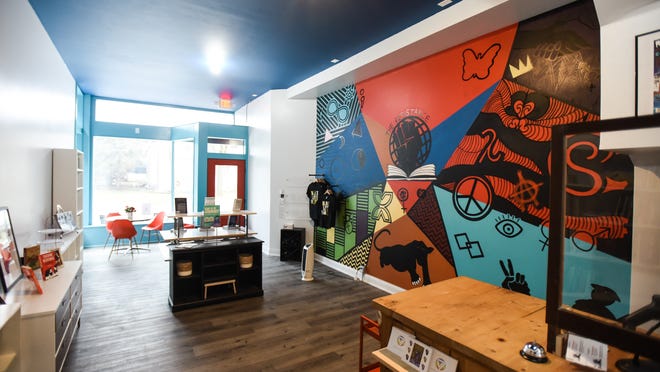 The Resistance bookstore sells literature for social change in Lansing

A new bookstore in downtown Lansing wants the literature it sells to spur change in the streets.

The Resistance bookstore is the brainchild of activists Fae Mitchell and Emily Dievendorf, who met during a May 2020 Black Lives Matter protest in Lansing. They continued collaborating, working on a BLM mural on Capital Avenue later that summer.

They began to seek a space where the community could gain knowledge to put into action.

“We can be out in the streets protesting or I can create art that’s jarring and illuminating,” said Mitchell, an artist who also coaches youth basketball. “But if people don’t have the background and the knowledge of what it is — where it came from, the historical background, statistics and facts — it’s just people yelling in the streets and considered angry.”

Dievendorf, a political consultant and organizer, said the driving force behind the bookstore is creating a means to an end, whether that concerns self care, policy or reinventing a broken system.

She leased the space last April following renovations at a pair of downtown buildings, once home to Belen’s Flowers and the Rosary Book and Gift Shoppe. The buildings were redeveloped with retail space on the ground level and apartments up top.

The Resistance isn’t the only new bookshop in Lansing aimed at uplifting marginalized voices.

Ten minutes away in the Lansing Mall is Socialight Society, where Nyshell Lawrence spotlights books by Black women. Mitchell attended the same church as Lawrence growing up.

Mitchell and Dievendorf consulted with Lawrence to seek advice and avoid overlap between their stores.

“The goal of both bookstores is to get as many books that are typically underrepresented in traditional bookstores into the hands of the people in our community,” Lawrence said. “The more the merrier.”

Lawrence added that independent bookstores serve as cultural hubs for the people they represent. Her own shop is a gathering place for Black women. The Resistance hopes to be the same for people in the LGBTQ community and those with disabilities; the owners tried to accommodate the latter group by installing wide doorways and tables low enough for shoppers who use wheelchairs or scooters.

“We are here to represent multiple communities, and that’s recognizing the different identities that we all have that cross,” Mitchell said.

The duo are putting the finishing touches on the space. Mitchell designed both the front sign and a mural inside that references different social movements. They’re also hoping to partner with local artists to sell merchandise in the store.

The duo wants to establish a community board and pursue nonprofit status, too, in order to receive donations. The board will comprise locals from various advocacy organizations.

Lawrence is glad to see another independent bookshop joining the ranks in Lansing.

“Independent bookshops are here to stay,” she said. “So looking out into 10 years, I always see it growing and getting bigger.”

Has Golden Harvest in Lansing Reopened for Its Killer Breakfast?