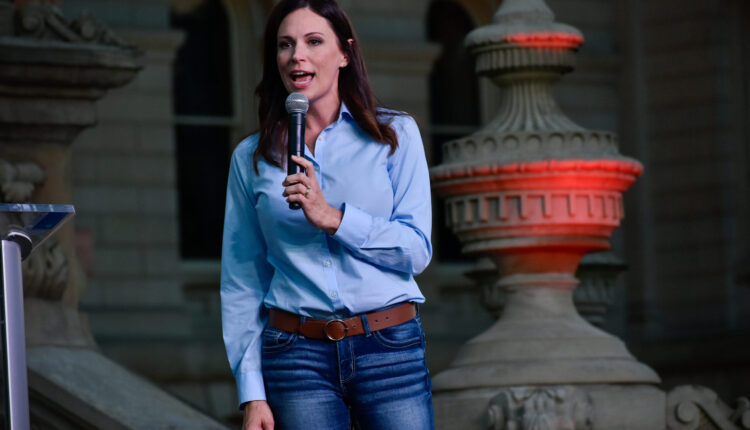 But she isn’t the first Michigan leader to take issue with how the Michigan Department of Education (MDE) operates.

“That the Republican nominee for governor has issues with the Michigan Department of Ed — that could be a headline from 1996,” said Josh Cowen, an education policy professor at Michigan State University, a reference to GOP former Gov. John Engler.

During a press conference outside the MDE focused on education policy issues, Dixon said she supports banning some books, criticized LGBTQ+ topics in curricula and said she wants to prevent transgender athletes from competing on sports teams that align with their gender identity.

In Michigan, the state superintendent does not report directly to the governor. According to state law, members of the state Board of Education — who are nominated by political parties and elected statewide — appoint the superintendent, who is the chairman of the board without the right to vote and is responsible for the execution of its policies.

The board appointed state Superintendent Michael Rice in May 2019.

Dixon, who will be up against Democratic Gov. Gretchen Whitmer on Nov. 8, said it would be her “goal” to get this issue on the ballot.

“That’s a Constitution change that would have to be up to the people and the Legislature,” Dixon told reporters.

“As governor, I will propose reorganizing the Department of Education and the state superintendent to report directly to the governor,” Dixon said. “No more passing the buck to unelected bureaucrats. I want to be responsible for the outcomes and to have the people of Michigan hold me accountable for the results.”

Dixon’s announcement comes after national far-right activist Christopher Rufo recently highlighted an MDE training video from 2020 that was designed to help teachers learn about different identities, refer to students by their preferred pronouns and names and how to report concerns about mental health without outing the students to their families. This has created a new uproar from far-right activists who falsely claim educators who discuss LGBTQ+ topics in the classroom are “predators.”

MDE spokesperson Martin Ackley said Tuesday that Rice is not planning to resign.

“Rice stays committed to working with parents and educators across the state to protect the health, well-being, and education of all Michigan students,” Ackley said. “He has no plans on stepping down as state superintendent.”

In late June, Launch Michigan, an education advocacy group composed of business, education, labor, philanthropy and civic leaders, released a list of recommendations for the state’s educational system. The group also suggested that the state reconsider how the state superintendent is appointed.

“Michigan must evolve its regulatory structures to ensure greater effectiveness, alignment, and accountability from all education stakeholders, including having the Governor appoint the State Superintendent,” Launch Michigan wrote. “Improvements to both the capacity and governance of the Michigan Department of Education are necessary, as are changes to the educator evaluation system and school performance measurements.”

That’s a Constitution change that would have to be up to the people and the Legislature.

Cowen said the MDE doesn’t have a lot of “statutory or even regulatory authority in our state.”

“It’s the governor and the Legislature that run education in our state … and every school district superintendent. I mean, [Detroit Public Schools Community District Superintendent] Nikolai Vitti right now affects more kids’ lives on a daily basis than Michael Rice. That’s not picking on Michael. It’s just the legal reality.”

Cowen said Dixon is likely trying to make the point that “our public education system needs to be more directly responsive to whoever the governor is.”

“But then that same point, if that’s the point she’s making, completely dismantles any attack on Gretchen Whitmer for whatever Michael Rice is doing with videos,” he added.