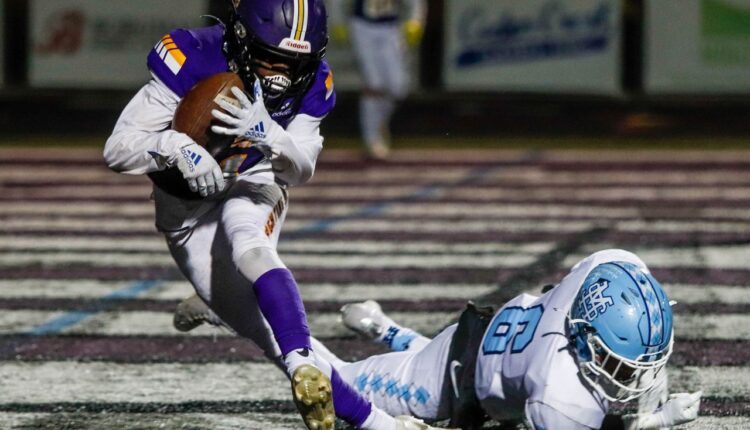 Week 5 choose: Who do you like when state-ranked teams clash in Grand Rapids?

Two Grand Rapids area games will feature state-ranked teams squaring off against each other Friday night.

Scroll below to see who MLive is picking in those matchups along with all the rest of the area games.

The OK Red has three teams ranked in the top 10 in Division 1 in Caledonia (No. 4), Rockford (No. 5) and Grandville (No. 8) this week. Two of those teams will clash when Grandville hosts Caledonia. Give the edge to the Fighting Scots. Their defense is giving up seven points a game. Caledonia 35, Grandville 22. Go with Jenison, Hudsonville and Rockford, too.

Zeeland West’s defense hadn’t recorded a shutout since 2015, but the Dux have blanked their past three opponents and have given up 15 points on the season. The Dux are 1-5 all-time against Muskegon and haven’t beaten them since 2005, but we like them Friday. Zeeland West 30, Muskegon 28. Let’s go with Mona Shores and Reeths buffers, too.

Coopersville and Fruitport have played some great games in recent years, with the Broncos beating the Trojans 29-22 last year and Fruitport winning 22-21 in 2019 and 28-21 in 2020. Expect another close one Friday. 35 Coopersville, 32 Fruitport. Also go with West Catholic, Unity Christian and Holland Christian.

Saugatuck has lost its past two games and has been held to seven points in each loss. Look for improvement from the Trailblazers this week. Saugatuck 21-12 over Comstock. MLive also likes Fennville, Triunity, Lawrence, NorthPointe Christian and Grand Valley Christian.