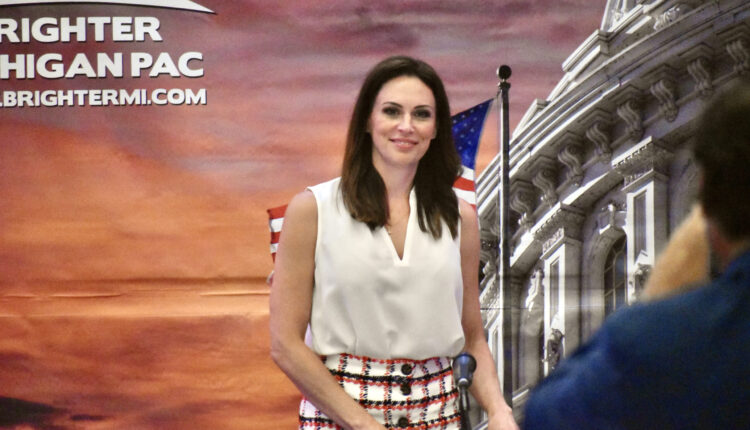 Following the results of Tuesday’s GOP gubernatorial primary election, physicians around the state said they’re concerned about what a Tudor Dixon administration could mean for pregnant people.

Dixon, whose run was bolstered by an endorsement by former President Donald Trump, won the Republican nomination with 40.6% of the vote. She was endorsed by Right to Life of Michigan in the primary over four other candidates and has repeatedly defended banning abortion, with no exceptions for health, rape or incest.

But a group of doctors said Thursday they don’t want politicians meddling in medical issues.

“Health complications are not so black and white. Allowing only vague exceptions defined by politicians leaves significant room for risk and irreparable harm or death for the patient,” said Dr. Stephanie Markle, a general surgeon in Kalamazoo, during a press conference. “So doctors, not politicians are the ones that need to be able to use the full range of treatment options when discussing things with our patients and allowing patients to make fully informed decisions about their health in relation to pregnancy and family planning, and that does include abortion services.

“This is why Tudor Dixon is a politician, a businesswoman. She’s not a physician; she’s not a doctor, and she shouldn’t be telling doctors and physicians how to practice medicine.”

Dixon’s campaign did not respond to a request for comment on the concerns raised by physicians.

Michigan has a 1931 abortion ban still on the books that prohibits all abortions in the state, with the only exception to save the life of the “pregnant woman.” Enforcement of that ban is currently on hold, despite the U.S. Supreme Court overturning Roe v. Wade in June, because of a temporary injunction in place.

Dixon will be up against Democratic Gov. Gretchen Whitmer who has taken several actions to protect reproductive rights and prevent the state from returning to the 91-year-old abortion ban.

Whitmer filed her own lawsuit in the Michigan Supreme Court to repeal the 1931 abortion ban and determine whether the state Constitution protects abortion rights.

Dixon has previously said she does not support “any exceptions” to the abortion ban, but she also tweeted on the day Roe fell that she supports exceptions to the ban if it is to “protect the LIFE of the mother.”

Last month, Dixon told interviewer Charlie LeDuff on his podcast that she believes a 14-year-old incest victim should be forced to give birth, calling the situation a “perfect example.”

Dr. Lawrence Ulmer, a family medicine physician in Portage, said that “forcing or pushing victims of rape and incest to carry pregnancy to term is inhumane and goes against all medical ethics.”

“Our leaders should not be forcing this pain and risk and trauma on girls in Michigan who are not even old enough to vote. We want Michigan residents to know politically motivated abortion bans like the one Dixon supports are dangerous and cruel,” Ulmer added.

The doctors also discussed how an all-out ban on abortion could push doctors to leave the profession and create a shortage of medical providers in Michigan.

Dr. Audrey Stryker, an OB-GYN in Bay City, said when she hears politicians talk about pregnancies and abortions in absolutes and complete bans, she feels they “just don’t understand it.”

“And I can’t stress enough how frustrating it is for all of us in the medical profession,” she added.

Markle echoed that concern and admitted that if the 1931 abortion ban is enforced she would consider leaving the job and ending the career she has been building for 12 years.

“You feel like you’re just fighting an uphill battle against an avalanche that’s already halfway down the mountain,” Markle said. “And I’m actually slightly terrified to continue to practice intensive care medicine in the state. And if this is our future, it’s disheartening.”

Skin Cancer Is a Risk No Matter the Skin Tone. But It May Be Overlooked in People With Dark Skin.

In California, Abortion Could Become a Constitutional Right. So Could Birth Control.