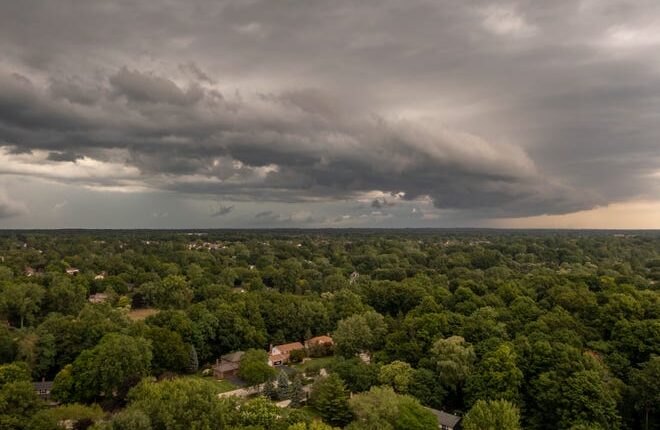 More rain is possible tonight after severe thunderstorms left more than 100,000 customers without power across Michigan and flooded some Metro Detroit roads on Wednesday night, the National Weather Service said.

Though the strongest storm cells have largely pushed east, “we will see some widespread rain through midnight,” said Alex Manion, a meteorologist with the weather service station in White Lake Township.

The showers are expected to end by early Thursday, when an approaching cold front triggers more storm chances, he said.

However, he added, “it’ll be more widely scattered” and not as severe as Wednesday.

Consumers Energy said more than 84,000 homes and businesses lost power overall; an online outage mapped showed nearly 74,000 by 10 pm Most were near Kalamazoo, Battle Creek and Portage on the state’s southwest side or between Lansing and Flint.

Nearly 150 Consumers Energy and contractor crews were working to assess damage and restore power in Genesee, Kalamazoo, Allegan, Barry, Jackson and Calhoun counties, the utility said in a statement.

“We were prepared for the strong storms to hit our state and had crews in place to begin restoration as soon as it was safe to do so,” said Guy Packard, Consumers Energy’s officer in charge for the power restoration work. “We appreciate the patience of our friends and neighbors, and we are committed to working around the clock to get the lights back on for everyone who counts on us as quickly as we can.”

Wind gusts topping 50 mph were recorded across the state, including in Flint, Kalamazoo and Allegan; more than an inch of rain fell near Lansing, according to the weather service website.

Trees and powerlines were down in Shiawassee and Lapeer counties. Tree limbs also fell near roads in Berrien and Oakland counties, the weather service said.

As many as 1-3 inches of rain doused parts of Metro Detroit, the weather service reported. That sparked flood advisories for Livingston, Oakland and Macomb.

Flooding also closed part of Interstate 75 between Nine Mile and Interstate 696 in Oakland County as well as the westbound Interstate 94 lanes at 12 Mile in Macomb, the Michigan Department of Transportation said.

Some vehicles stalled out in the I-94 flooding, Michigan State Police reported on Twitter.

The turbulence was fueled by heat and humidity that baked Metro Detroit for much of Wednesday, the weather service said.

Detroit Metro Airport in Romulus reached a high of 95, 12 degrees above average for the date and near the record, 96, last set in 1988, weather service data show.

Temperatures Thursday are forecast to top out in the low 80s.

Friday could be slightly warmer, with highs in the mid-80s and slight chance of storms.

Heat returns for the weekend, with the weather service predicting the mercury rising into the 90s on Saturday and Sunday under sunny skies.