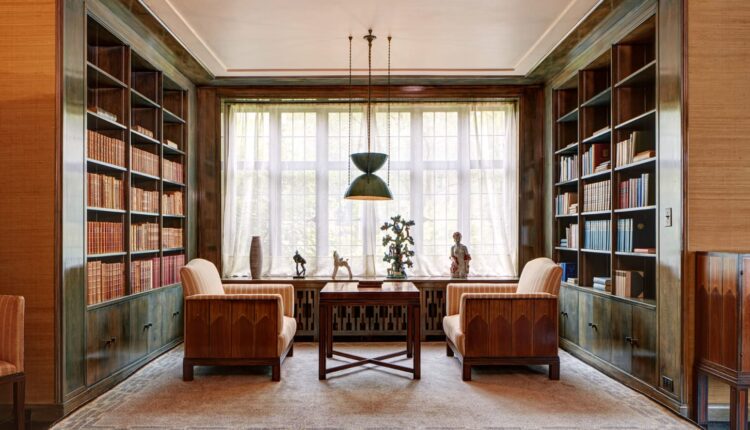 It was a reactionary tower built for reactionaries—a soaring Neogothic edifice easily recognized by its crown of buttresses. But instead of becoming the stunning and unique skyscraper its owners thought it would be, the Chicago Tribune Tower is seen as the last gasp of historicism. Its lasting architectural influence, ironically, is all about what it was not—the vertiginous fusion of historic and modern proposed by the runner-up architect, Eliel Saarinen of Finland.

If you look at Saarinen’s drawings submitted for the 1922 competition (which drew 260 entries including proposals by Walter Gropius, Adolf Loos, Adolf Meyer, and Bertram Goodhue), you’ll see plans for an Art Deco building that seems familiar, even though it was never built. That’s because after the committee went with the historicist tower designed by John Mead Howells and Raymond Hood, everybody began publicly praising Saarinen’s proposal. Then they started building towers inspired by it.

The Tribune Tower on the right versus what Saarinen proposed, on the left.

Photo Illustration by The Daily Beast/WikiCommons

““The Finnish-master-edifice… prophesies a time to come,” wrote the father of the skyscraper himself, Louis Sullivan. “Not so far away, when the wretched and the yearning, the sordid and the fierce, shall escape the bondage and the mania of fixed ideas.” The architect and critic Thomas Talmadge called it “the best design since Amiens.” To glance around at buildings built across American cities in the years after Saarinen’s proposal is to see his drawing brought to life. The Telephone Building in San Francisco is a near copy, and close followers include the Gulf Building in Houston and Albert Kahn’s Fisher Building in Detroit. Even the two winners of the competition found themselves bowing to the man they beat. John Mead Howells’s Panhellenic House in New York is incredibly similar and Raymond Hood’s New York buildings including the American Radiator Company Building, McGraw-Hill Building, and Rockefeller Center owe a lot to Saarinen’s ideas.

If this quick plunge into the world of 1920s architecture has been a bit heady and you’re wondering who the hell Eliel Saarinen is, or perhaps why he sounds somewhat familiar, he was the father of Eero Saarinen, the designer of the St. Louis Arch, Dulles Airport, and the TWA Terminal. (He actually lost out to his son in the design competition for the Arch, and when a notice came to the office that E. Saarinen had won, all thought it was for the father). He was also one of the greatest architects working in the early 20th century, first in Finland as the master behind some of its most iconic buildings, and then in the US, where he planned and designed the campus of Cranbrook, a campus outside of Detroit of posh schools, museums, and research facilities that have seen the likes of Mitt Romney, Florence Knoll, and Charles and Ray Eames come and go.

And it is on the campus of Cranbrook that one can find the house he and his stupendously talented family designed.

Saarinen’s second-pace finish in the Tribune Tower competition came with more than accolades—he also won $20,000 which allowed him to move his wife, Loja, and their two children to America. He landed at the University of Michigan in 1923 and fell in with publisher George Booth, a major patron of the Arts & Crafts movement who was then developing Cranbrook. Saarinen was gradually included in Booth’s plans and eventually became the lead designer of the project while his wife became the head of the school’s weaving program. Along the way, the architect designed and built his dream home.

Around the same time Saarinen was designing his house, the architectural world was dashing into the era of Art Deco architecture, which blended sleek industrial forms, geometric shapes, and decorations from ancient cultures like the Mayans and Egyptians. Saarinen’s house is a perfect time capsule of that transition period, between the historicist Arts & Crafts and the sexy Art Deco. It’s an interior that pulls from every thread of design history, a stark contrast to the anti-history visions of architects like Corbusier, whose modernist aesthetic would dominate for decades.

Standing on Academy Way on a blustery Michigan December morning, staring at the house Saarinen designed for his family, the first thing one notices is how little this light Ohio brick exterior tells you about what’s inside. It largely blends in with its historicist neighbors—the whole street feels like it was snatched from an English village. The only exterior hints about what might be inside are the brick patternwork, leaded glass windows, and ceramic roof. Even when you first enter, wonder is delayed, as Saarinen placed the dark front hall and staircase running alongside part of the frontage for privacy. But after you slip on the booties and pass through the velvet portieres, you enter a world that perfectly fuses architecture, design, and art.

There are four main rooms on the first floor of the house tour, and each successive one will make you feel less and less like you’re cool enough to be here. The reception hall (to call it a living room would miss how unfriendly and unconducive to hanging out its arrangement is) is the first and its centerpiece is a raisin-colored horizontal fireplace of Pewabic tile that Eliel designed for an exhibition at the Met. Gaze around and look closely at the pieces, all designed by the architect, from a bench draped by a ryijy (traditional Finnish rug) to the brass cock andirons. According to a book on the house, Eliel went through a bit of a rooster obsession in the 1920s, designing gates, furniture, and veneers with the bird. Softness is key here, and so the walls are jute cloth and the lighting from torchieres.

Eliel was notorious for playing with axes and focal points, arguing that when they were off just a little bit you were made more aware of the designs. So the magnificent 19-foot rug along the floor designed by his wife Loja is off center by six inches. “To paint a picture is art, to hang it is architecture,” he once declared, so also pay attention to how some artwork is hung, for lack of a better word, imperfectly.

Walking along the right side of the rug and turning to face the street, you’ll find an alcove that houses the library, although the word alcove in this context feels flimsy and insufficient. It is a vision in maple stained gray and stocked with leather-bound books. When Eliel talked about his approach to urban planning, he insisted that among the most important things were “intimate painterly settings within the network of roads and open spaces.” It doesn’t get more painterly than this space that screams out for Hopper to rise from the grave and paint it.

The third room is the house’s most iconic, and I wish Cranbrook would keep the velvet portieres shut so they could be theatrically swept open on tours to reveal the dining room within. If the reception hall was peak Arts & Crafts, the dining room is pure Art Deco. It is octagonal in shape with a 23-carat painted concentric circle ceiling mirrored by a veneered circular table set on an octagonal base. The walls are panels of veneered fir with four mercury red niches. The chairs and table were designed by Eliel and manufactured by W&J Sloane. While the black trim on the fluted backs of the chairs looks like inlay, it’s actually painted, much to Eliel’s dismay.

The final space on the first floor is the studio, a long white barrel-vaulted chamber. One first steps into the “cozy corner” a sitting area with a built-in bench covered in a green-patterned ryijy set off with a lower height ceiling and fluted columns. This alcove and the living room area in the middle of the vaulted room were where the Saarinens hung out, and where Eliel was more than happy every day to spend “the happiest hour of the day,” cocktail hour. At the end of the hall was the office, which both Eliel and Loja used.

The tour culminates upstairs in the master bedroom (the other bedrooms house curators today), which is decked out in furniture and decorative objects designed by their children (both Eero and his sister Pipjan had successful furniture design careers). The most spectacular piece is probably the silver Art Deco mirror and lamps set that Eero designed for his mother’s dressing table.

But hidden through mirrored doors is one of the house’s most dramatic spaces, the en suite bathroom. Off-white tiles cover the space in a grid that reminds one of Tron creating a gleaming space that feels contemporary even now. (One design note for those who enjoy the details: the mirror was placed between two windows so that one’s face would be lit by natural light.)

Wandering from room to room, taking in the art, the textiles, the design choices, and the objects, it’s clear that this was a family that understood the joy humans get from encountering a variety of beautiful things. The house is also a window onto something often forgotten today—Detroit and Michigan as a whole were and still are global centers of design and creativity. So next time you’re in the area, schedule a tour, because who knows, you might find that the one thing your house is missing is a plush velvet portiere you can dramatically whisk back to reveal your living room.