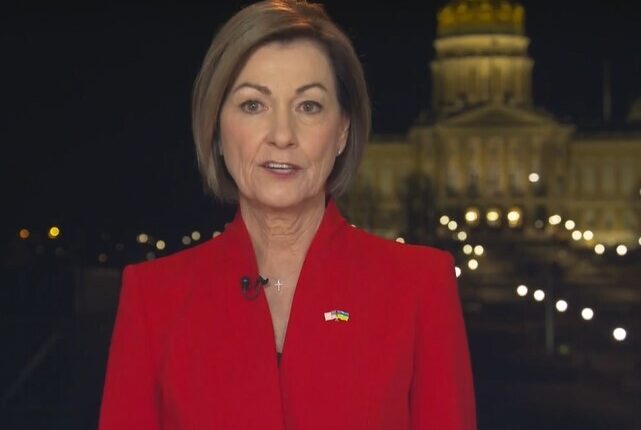 Gov. Kim Reynolds emphasized the importance of personal freedom and presented Iowa’s approach to the economy and COVID-19 as “an alternative” to Democratic policies during her nationally televised GOP response to President Joe Biden’s State of the Union address.

“We know our problems require bold action, but we also know that bold action doesn’t have to mean government action,” Reynolds said Tuesday in prepared remarks. “It’s Americans making their own decisions for their own families and future.”

Reynolds began the speech with a focus on foreign policy — a main theme of Biden’s address. On behalf of Republicans, she criticized Biden’s approach to crises in Ukraine and Afghanistan.

Then Reynolds turned to domestic issues, including inflation and COVID-19 mitigation measures. In contrast to federal policies, she highlighted Iowa’s approach, including the reopening of schools and businesses during the COVID-19 pandemic and a sweeping new tax cut plan.

COVID-19: Biden calls for return to normalcy, Reynolds says Iowa did it first

Biden declared America had entered a “new moment in a fight against COVID-19,” pointing to new Centers for Disease Control and Prevention guidance that most Americans can remove masks. He encouraged vaccines and continued vigilance for another variant, but he also called for schools and businesses to return to normal.

“We can end the shutdown of schools and businesses,” Biden said in prepared remarks. “We have the tools we need.”

Reynolds pointed to Iowa’s response to the pandemic in her rebuttal, noting that she reopened business and required schools to offer 100% in-person classes by early 2021.

“We honored your freedoms and saw right away that lockdowns and school closures came with their own significant costs; that mandates weren’t the answer,” Reynolds said. “And we actually listened to the science, especially with kids in masks and kids in schools.”

Reynolds signed a bill in January 2021 requiring Iowa schools to offer 100% in-person classes by mid-February. She emphasized parental choice, a major theme in her approach to education. She took a similar approach on mandatory masking in schools: At the close of the 2021 legislative session, Reynolds held a midnight bill-signing to forbid schools from requiring face coverings.

“It was true before the pandemic and has never been more important to say out loud: Parents matter,” Reynolds said Tuesday. “They have a right to know, and to have a say in, what their kids are being taught.”

Both moves, as well as Reynolds’ focus on individual choice throughout the pandemic, were met with some opposition in Iowa.

Parents of disabled children sued the state for the law against school mask mandates, arguing their children would not be protected adequately if classmates were unmasked. A federal judge issued a temporary injunction against the law in October, allowing school districts to allow mask mandates.

An appeals court issued a narrower ruling, allowing some schools to keep a mandate in place to comply with the federal Rehabilitation Act or the Americans with Disabilities Act.

Democratic leaders in the Iowa Legislature also pushed back against Reynolds’ record on COVID.

“I think that rather than following the science and trying to keep things open, safe, she unfortunately decided to play politics with the pandemic,” Senate Minority Leader Zach Wahls told reporters Tuesday afternoon. “Her response failed, and it’s a big part of why there are fewer Iowans in the workforce today than when she took office.”

Reynolds on Biden’s foreign policy: ‘Too little, too late’

Biden began his hour-long address with a focus on foreign policy, speaking extensively about the Russian invasion of Ukraine. He reaffirmed U.S. support for Ukraine during the conflict.

Reynolds also called for Americans to “stand united in solidarity with the brave people of Ukraine.” But she argued Biden had mishandled the conflict by not sanctioning Russian pipelines earlier and “focusing on political correctness rather than military readiness.”

“Weakness on the world stage has a cost,” Reynolds said. “And the President’s approach to foreign policy has consistently been too little, too late.”

Since Russia attacked Ukraine in late February, Republicans and Democrats have united in their calls for sanctions against Russia. Many Republicans, including those in Iowa’s delegation, argued Biden should have done more and done it sooner to prevent the attack.

Biden said the U.S. and its allies were enforcing “powerful economic sanctions.”

“We are inflicting pain on Russia and supporting the people of Ukraine,” Biden said. “Putin is now isolated from the world more than ever.”

Biden announced during his address that he would close U.S. airspace to Russian planes.

The U.S. inflation rate was 7.5% in February – a record-high in recent history. Both Reynolds and Biden pointed to inflation as a major issue, though they proposed different solutions.

Reynolds said inflation was “an everybody problem,” comparing it to the inflation of the 1980s, when the inflation rate peaked above 14%. She spoke about her experience working as a grocery store checkout clerk during that time.

“I watched working people choosing which essentials to take home and which ones to leave behind at the register,” Reynolds said. “And now President Biden’s decisions have a whole new generation feeling that same pain.”

Biden said his “top priority” was getting prices under control. He pointed to supply chain issues and workforce shortages as the reason behind inflation

“But with all the bright spots in our economy, record job growth and higher wages, too many families are struggling to keep up with the bills,” Biden said. “Inflation is robbing them of the gains they might otherwise feel.”

Biden pushed for lower prescription drug costs, affordable child care and housing, and fair taxes on the wealthy to “grow the economy.” Biden’s “Build Back Better” proposal, which included several of those measures, stalled in Congress.

Reynolds disagreed that more federal programs were the solution. She highlighted the latest round of tax cuts in Iowa, which she signed into law Tuesday afternoon.

“While Democrats in D.C. are spending trillions, sending inflation soaring, Republican leaders around the country are balancing budgets and cutting taxes,” she said. “Because we know that money spent on Main Street is better than money spent on bureaucracy.”