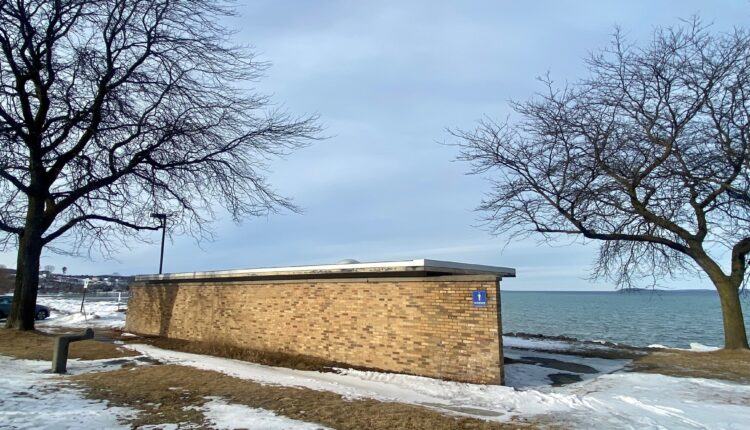 Nearly $400,000 in upgrades could be coming to two downtown Traverse City beaches, including the replacement of the West End Beach bathhouse with a new ADA-compliant facility and the construction of new public restrooms near the volleyball courts. City commissioners will vote this month to support applying for a state grant for part of the project and committing $197,283 in matching city funds to carry out the long-planned improvements.

Commissioners will vote Monday to set a March 21 hearing on seeking a Michigan Natural Resources Trust Fund (MNRTF) grant to cover half the project costs for installing new public restrooms at the two beaches. According to City Parks and Recreation Superintendent Michelle Hunt, the existing bathhouse at West End Beach (pictured) was built in the 1950s and does not meet the standards of the Americans with Disabilities Act (ADA). “The bathrooms have exceeded their useful life,” she wrote in a memo, noting that construction plans call for demolishing the existing bathhouse, installing a new facility, and adding new water and sewer lines.

The project also calls for building new bathrooms just north of the parking lot at the volleyball courts. Staff noted that the exact layout and design of the two facilities has not yet been finalized, although the general locations of the restroom areas are set. The projects have been in the city’s capital improvement plan since fiscal year 2017-18 and meet the goals of the Parks and Recreation Master Plan to “maintain and improve existing parks,” according to Hunt. City Planning Director Shaw Winter says the city would learn by December whether it was approved for grant funding, with the state legislature typically appropriating funds in the budget the following spring.

“To my knowledge, if we do not get the grant we will likely need to pursue a different grant,” he says. “Key to the grant application is a resolution from the city commission that they will budget the matching funds that are proposed.”

Two prominent community groups wrote letters in support of the restroom projects. According to TART Trails Executive Director Julie Clark, “the existing West End Beach facilities, while functional, are showing signs of age and in serious need of improvements. The parking area near the volleyball courts where the additional public restroom facilities are proposed is a hugely popular destination and would benefit greatly with this additional amenity.” Clark pointed out that both bathhouses will be located directly off the TART Trail, with the two trailhead areas representing “two of the busiest sections of the entire trail network with visits exceeding two million trail users annually.”

“Trail user surveys have shown that the number one improvement to the trails that people continually ask for are more and better bathrooms,” Clark wrote. “These two projects are ideally located to serve both trail users and those who are enjoying this stretch of beach in Traverse City.”

Associate Director Alanna Lahey of the Disability Network Northern Michigan also expressed support for new beach restrooms, saying the proposed changes “will not only benefit all persons who visit at this West Bay location but will also truly facilitate a diverse community of people.” Upgrading both sites will make them more accessible to people with disabilities, seniors, and families, Lahey said.

“Currently, there is an existing restroom located a distance away from the volleyball courts and beach access,” she wrote. “This project will improve an out-of-date existing restroom at West Bay Beach and add a new universally accessible restroom and promenade nearer to a heavily frequented beach and volleyball courts, increasing the accessibility for all.” Lahey suggested adding single-use family-style restrooms where possible and considering other upgrades like wayfinding signage, benches with backs and arm rests, accessible parking spaces, and low lighting to make the sites “safer for all visitors.”

The bathrooms are not the only improvements planned for the downtown beach area. In January, Parks and Recreation commissioners voted 4-3 to approve a proposal to expand the volleyball court area, adding two more new courts west of the existing courts. The sand at the existing courts is also planned to be replaced. Winter says the work has not been allocated in the city budget yet, but “if we get the funding for the volleyball courts and bathrooms and the project timelines align, it may make sense to do any required site work at the same time to save contractor mobilization costs.” He adds: “That all will be determined down the road.”

As for the eroding parking lot at West End Beach, which has been partially closed off for several years, staff said there is not yet a long-term plan in place for addressing the problem. “We are still determining how best to proceed with the parking lot,” Hunt says. “Nothing has been finalized yet.”