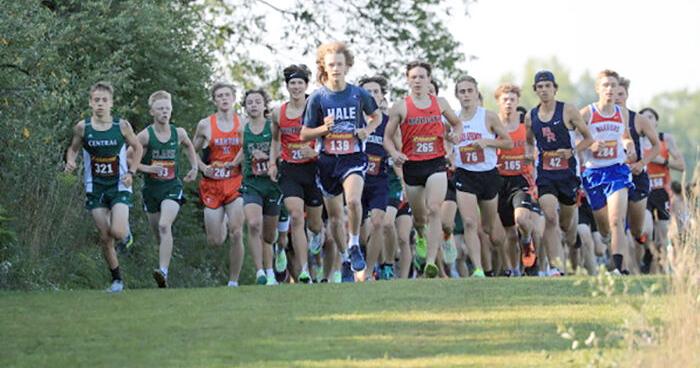 The Coyotes totaled 80 points while Cedar Springs was second at 103, Central Montcalm third at 132 and Manton ninth overall at 229.

“The boys ran exceptionally today against some really good competition,” Reed City coach Rich Saladin said. “Anthony Kiaunis and Gus Rohde were stellar and we had six boys in the top 43 overall.

“We’ve had two great weeks of practice and the boys knocked it out of the park. It was fun to win the invite and we’re very proud of the effort.”

“The girls are young overall,” Saladin said. “Senior Nora Smoes ran well and looked strong. Clara Smoes also earned a medal with a strong kick at the finish. It’s a starting point and now we will work hard toward our goals.

“They were all nerves but now they’ve had the experience and they’ll get stronger and better.”

SCOTTVILLE — Manton ran its record to 6-1-2 by winning the Mason County Central Round Robin Invite.

“We had a great opportunity today to work on tweaking our offense and solidifying our defense,” Manton coach Nikki Helsel said. “It was a great team effort and we had a chance to put our depth to a test.

“I was pleased overall with their effort but will continue to push them to take their play to the next level.”

Manton is at quad today at Kingsley.

MANCELONA — Forest Area ran its record to 7-2, winning three matches in a quad at Mancelona.

The Warriors opened with a 25-8, 25-15 win over Grand Traverse Academy. Gracie Schroeder had six kills and Desjanae Perkins had three while Taylor Muth dished out 10 assists.

Forest Area is at Johannesburg-Lewiston on Tuesday.

“We started off with a slower pace but we found our groove and played a hard-fought game,” NMC coach Anna Veldink said. “We worked together as a team as we ended the night in a close, intense match.”

Paige Ebels had three aces while Kylee Winkle had four. Winkle had 12 kills while Ebels had 17. Winkle and Kate Shaarda each had a block while Shaarda had 14 assists and Jada VanNoord dished out 24.

Leading server for the Vikings was Emma Holdship while Teagan Brown led in digs.

Traverse City Central won the event with a 358 while Petoskey shot 389, Traverse City West 397 and the Vikings a 416.

“This was our first Big North match of the year and we grew a lot from last week,” Cadillac coach Brandon Bailey said. “Avery (Meyer) led the way with our first 90 of the year. I think she felt very comfortable today and it showed. Our capatains, Onalee (Wallis) and Madalie (Dickerson) did a great job of helping both varsity and junior varsity teams get ready for today.

“Interlochen was not good to us last year, so we wanted to redeem ourselves and we did.”

Avery Meyer paced Cadillac with a 99 while Onalee Wallis shot 101, Madalie Dickerson 107 and Grace Drabik a 109.

LUDINGTON — Cadillac dropped an 8-0 decision to Ludington in a non-conference boys soccer contest.

“We continue to get better,” Cadillac coach Paul King said, despite the setback. “Freshmen Ryan Lincoln and Reed King made their varsity debuts and I was very proud of how they played.

“We have a ways to go but I can see improvement in this team every day.”

Ludington won the JV game 1-0. Connor Larr stopped a penalty shot in the second half while Dominic Triber and McGill McGuire had strong games.