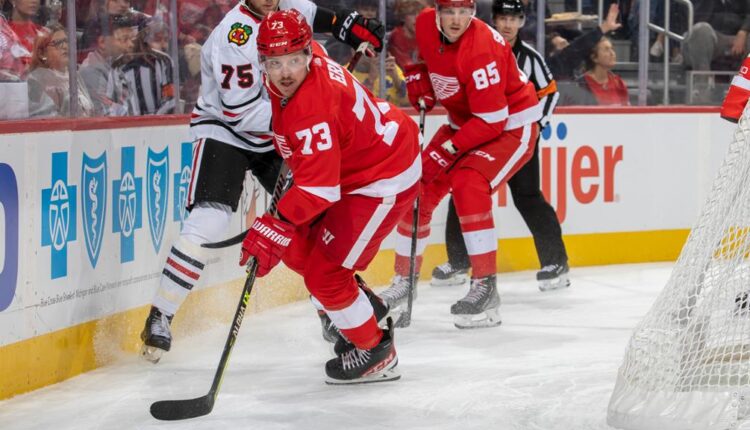 DETROIT — The Detroit Red Wings dropped a 4-2 decision to the Chicago Blackhawks on Wednesday night at Little Caesars Arena.

Adam Erne scored twice for the Red Wings, who outshot the Blackhawks, 33-22, but allowed two unanswered goals over the final two periods.

goalies Alex Nedeljkovic other Jussi Olkinuora shared the crease for the Red Wings, with Nedeljkovic stopping eight of 10 shots before being replaced by Olkinuora, who made 10 saves on 11 shots he faced in relief.

With the loss, Detroit dropped to 1-1-0 two games into its eight-game exhibition slate.

NEXT UP: The Red Wings will play their second straight preseason home game Friday night when they host the Washington Capitals at Little Caesars Arena. Puck drop is set for 7:30 pm

Just 11 seconds into the game, Dylan Sikura scored to give Chicago an early lead.

Elmer Soderblom‘s shot from the left faceoff circle bounced off his brother and Blackhawks goaltender Arvid Soderblom to Erne, who converted the rebound to tie the game. Simon Edvinsson also recorded a helper on Erne’s tally.

Lukas Reichel collected Kevin Korchinski’s stretch pass and fired a shot past Nedeljkovic into the back of the net.

After receiving a return pass from Pius Suter in the slot, Erne’s one-timer zipped past Soderblom for his second tally of the game. Gustave Lindstrom was also credited with an assist on Detroit’s scoring sequence.

Jujhar Khaira cleaned up Alec Regula’s shot from the point for a power-play goal.

Sam Lafferty put the game away for Chicago with an empty-netter.

Lalonde on Soderblom’s play against the Blackhawks

“I liked him tonight. He was around the puck more, a little more assertive and you can see some confidence in his game. Good stuff for him. That’s what you ask young guys to do – improve from last game to this game. I thought he did that.”

Erne on what he hopes to prove this preseason

“There’s a lot of spots to be fought for and I’m just trying to make a good first impression.”