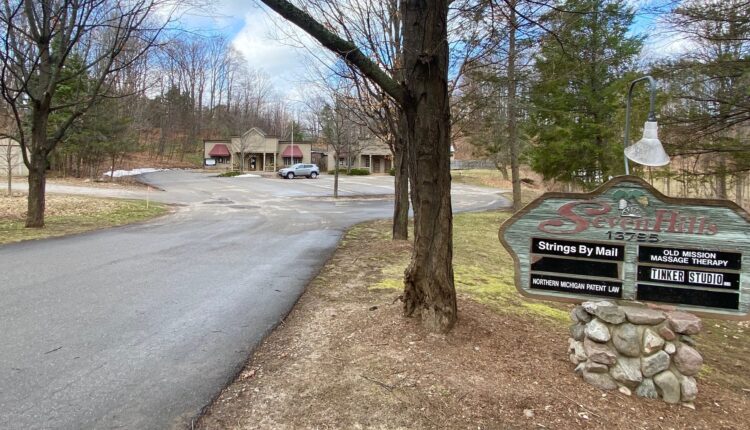 The developers behind plans to revitalize the Seven Hills Commercial Complex on the Old Mission Peninsula are working on final permits with Peninsula Township to get the go-ahead in the spring and start construction in the summer. The ticker shows the latest version of the project plans and proposed tenants, as well as other retail and restaurant news from across the region.

Seven hills
Three local entrepreneurs with longstanding ties to the Old Mission Peninsula – Jay Milliken, Troy Daily and Jordan Valdmanis – are working on getting the township approval for a commercial property redevelopment under contract at 13795 Seven Hills Road north of Devil’s Dive Road.

The partners appeared in front of the community trustees on Tuesday for a public hearing on the development. An updated application shows that the partners dropped a small 10-room motel that was part of an original proposal submitted in late 2020. Township bylaws requires at least five acres for housing, and the two-acre site in Seven Hills wasn’t large enough to meet that standard.

“Seven Hills’ intent is to create a focused, well-curated experience based on local commerce and exceptional hospitality,” added the developers.

At the meeting on Tuesday, several residents spoke publicly against and in support of the project. The concerns mentioned included the volume of traffic that the development could generate and whether on-site parking would be sufficient, potential impact on the neighborhood, and increased daily hours of operation, including for alcohol sales. Other residents – including current tenant of Seven Hills, Rick Burbee of Tinker Studio – said the community center would provide a welcome mix of new businesses to Old Mission.

Since the property is zoned for the proposed uses – a Special Use Permit (SUP) is required – the developers attended the meeting on Tuesday, awaiting approval from the municipality. However, community attorney Greg Meihn pointed out a few issues that he believed needed to be better worked out before the project was approved, including providing a more detailed site map and answering open questions about water and other infrastructure systems on the property. These concerns appeared to have arisen at the last minute on Tuesday, when the developers expressed their frustration and told trustees that they had worked closely with community staff prior to the meeting and believed that their application documents were in order.

The trustees voted to send the SUP application back to the municipality’s planning committee to clarify any outstanding issues before returning at an upcoming board meeting. Trustee Isaiah Wunsch apologized to the developers for the bumpy approval process. “We only have about half a dozen commercial properties in Peninsula Township so it is always a challenge when we are trying to modify or create a SUP for them. Sorry for our challenges, but we won’t be navigating what we do with these very often, ”he said.

More retail and restaurant news …
Several changes to retail stores and restaurants are underway in downtown Traverse City. The former Yen Yoga & Fitness Studio at 332 East Front Street, including a Harley-Davidson retail store. Michael Zipser, the owner of Zips 45th Parallel Harley-Davidson in Gaylord, plans to open a downtown Traverse City Zips location in May that will offer a full line of Harley-Davidson engine clothing, parts and accessories. Motorbike service and sales are offered in Gaylord, with free transportation between the Gaylord and Traverse City stores, according to a Facebook post by the company. Zippers use half of the former Yen Yoga room. Realtor Dan Stiebel says the rest will be used by artist studios and a new restaurant that specializes in salads. Details on the latter are expected to be revealed after the company closes its financing.

Nearby at 441 East Front Street, retail store Lakes and grapes is holding a special closing sale today (Friday) to celebrate its last day downtown. After two years on East Front Street, Lakes and Grapes management announced that they would not extend their lease for a third year. “Due to multiple building problems, unreliable utilities, environmental concerns, and high flow levels, the building has no longer become a suitable location for a retail location,” said management. “We are currently looking for a new space for lakes and grapes.”

Down on East Front Street, Katie Asher plans to open a new vintage clothing and homeware store on April 1st Underpants. vintage in the Front Row Center building at 121 East Front Street (Suite 108). “I wear clothes between the 1910s and 1990s and mostly focus on the 60s and 70s,” says Asher. “I’ve chosen to be as gender neutral as possible, so all clothing is for everyone. I also have a small amount of vintage housewares and will be adding to my inventory in the near future to have some local artists in business too. “The store will also have an event space that will offer knitting, figure, touch-up and other artistic classes” as soon as Covid has a little more under control, “says Asher.

In the village at Grand Traverse Commons, Crystal Lake Alpacas – which operates an alpaca farm and boutique in Frankfurt – opened a second retail store in the 50 Mercato building in Traverse City this month. According to the company, the store carries a “wide variety of alpaca products, including sweaters, hats, blankets, cuddly toys, socks and much more”.

Finally, two previously announced restaurants have now confirmed their opening dates. After several months of closure to move from their original location on Union Street to newly renovated dig sites in the former Patisserie Amie building at 237 Lake Avenue, Benedict Owner Leslie Elsen officially reopened her restaurant on Thursday. The café has, among other things, expanded seating, new menu items and an espresso bar and is open from Wednesday to Sunday from 8 a.m. to 2 p.m. Also a new Traverse City location for the national franchise Jersey Mikes Subs is planning a grand opening on Wednesday at 110 Munson Avenue in the former That’sa Pizza area. The New Jersey-based restaurant chain focused on “freshly cut, authentic Northeast American style sub-sandwiches on freshly baked bread” and offered a variety of hot and cold subs.