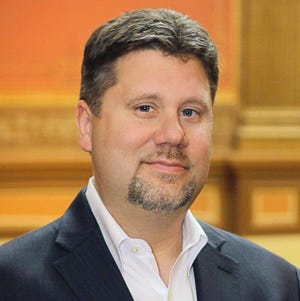 LANSING – Central Michigan University suspended two employees after a story of alleged sexual harassment by a Lansing-based political advisor who is a CMU alumnus was reported in the Free Press on Wednesday.

The university is apparently investigating whether the faculty or staff helped TJ Bucholz, owner and managing partner of Vanguard Public Affairs, recruit staff despite being aware of a toxic work environment in the consulting firm. Several women who told the Free Press of Bucholz’s alleged sexual harassment were CMU graduates hired straight out of college.

“We are aware of the allegations that have come to light against Vanguard Public Affairs, including a connection to a current member of the CMU faculty,” said university spokesman John Veilleux on Thursday.

“We have also received reports that an employee may have been aware of the situation. We are taking immediate action to investigate this matter thoroughly and both employees have been banned from all assignments and contact with students.”

The university has not identified the suspended employees.

The suspensions and investigations were first reported Thursday by the Michigan Information & Research Service, a political newsletter from Lansing.

“The health and safety of each and every CMU student is our top priority, and the alleged incidents are in direct contradiction to our university’s values,” said Veilleux.

“We will not tolerate any behavior or practice that violates our commitment to integrity, respect and compassion, or that creates an environment that is hostile or unwelcome to any individual.

“We offer our unconditional support to those who have bravely come forward to tell their stories, and we encourage all current or past students affected by these incidents to contact our office at 989-774-3253 for civil rights and institutional justice or contact one of our confidential support services for assistance. “

Also on Thursday, Lansing Downtown, Inc., an organization promoting downtown Lansing, announced that Bucholz “will no longer serve on our board of directors.”

“Part of ensuring a just and welcome space is our belief that all victims should be believed and heard – and that we respond to that belief when necessary,” DLI said in a statement posted on Facebook.

And the Michigan Department of Civil Rights – which said it recently signed a contract with Vanguard, but the contract was closed – urged anyone who has been sexually harassed at Vanguard or an employer to file a complaint with the state agency.

“The fact that someone contracted with the Michigan Department of Civil Rights has been accused by several women of such behavior is deeply worrying,” said James E. White, the division chief.

“We must take their allegations seriously. We urge these individuals and others who have been victims of sexual harassment to lodge a discrimination complaint with the Department of Civil Rights. If the harassment has occurred within the last 180 days, we will address it thoroughly Carry out conduct and neutral investigations. It is important that people exposed to this behavior contact them as soon as possible and do not assume that they have no recourse. “

In May 2019, the Michigan Department of Civil Rights issued a call for proposals for a report on the Michigan Civil Rights Commission’s examination of differences in K-12 education. The Vanguard proposal was “among the highest rated at the lowest cost” of seven proposals received, said spokeswoman Vicki Levengood, who could not immediately deliver the value of the contract.

“In December 2020, Vanguard did later work on the report and provided comparative funding analysis between charter schools and traditional public schools,” she said.