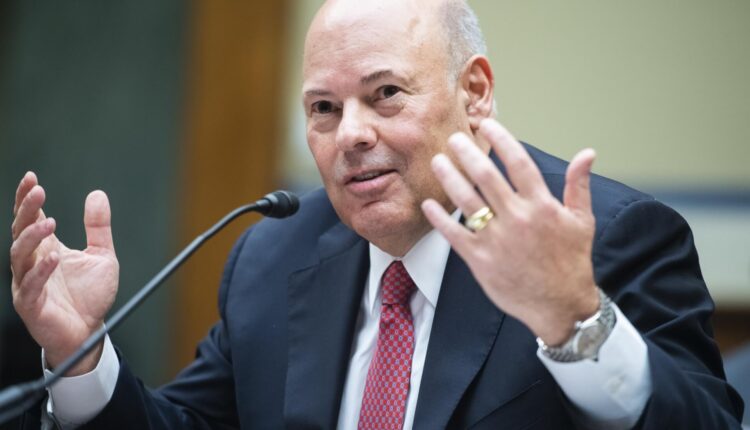 Despite overwhelming passage in the U.S. House of Representatives, legislation that would overhaul the U.S. Postal Service (USPS) remains hung up on a technicality in the Senate.

Meanwhile, efforts also are stalled from progressives to remove Postmaster Louis DeJoy, a Trump appointee who purposely brought about changes that slowed mail service — including removing 671 sorting machines — prior to the 2020 election.

DeJoy is currently embroiled in a dispute over a $11.3 billion contract that would purchase 165,000 new trucks for USPS, 90% of which would be gas-powered, effectively ignoring one of President Biden’s first Executive Orders, which called for “clean and zero-emission vehicles for Federal, State, local, and Tribal government fleets, including vehicles of the United States Postal Service” no later than 2035.

The deal prompted the Environmental Protection Agency to issue a letter Feb. 2, saying that in addition to containing “serious deficiencies,” the environmental review process also “lacks disclosure of important underlying information,” and stated that the Postal Service “should not proceed to a decision” on the proposal.

But a year into the Biden administration, many Democrats and other progressives are loudly asking why DeJoy has not been forced out. U.S. Sen. Bernie Sanders (I-Vt.) demanded DeJoy’s resignation in December, describing his tenure at USPS as “total failure of leadership,” while Sen. Elizabeth Warren (D-Mass.) has been calling for his outright firing since August 2020.

What is most puzzling to DeJoy’s detractors is that with the pending confirmation of two Biden appointees to the USPS Board of Governors, the administration will technically have the five votes that would be required to remove DeJoy. But so far, there has been no inclination by at least two of those appointees to take that action.

In fact, one of the new appointees, Derek Kan, is a Republican who formerly worked as a policy advisor for Senate Minority Leader Mitch McConnell (R-Ky.), as well as serving as a deputy director of the White House Office of Management and Budget in the Trump administration.

Another Biden appointee, USPS Gov. Amber McReynolds, was previously asked by MSNBC whether DeJoy should be fired but declined to answer that question. Instead, she indicated that there was “a lot of confusion” when DeJoy came on board as postmaster and was “disappointed in the communications that were coming out of the postal service.”

Another of DeJoy’s critics has been U.S. Sen. Gary Peters (D-Bloomfield Twp.), who in August 2020 as the ranking Democrat on the U.S. Senate Homeland Security and Governmental Affairs Committee, said DeJoy owed Americans both an apology and an explanation for the delays.

With Democrats taking control of the Senate last year with the barest of majorities, Peters now chairs that committee. He put forward a reform bill in May 2021 that would create nearly $50 billion in savings for the USPS by eliminating a requirement that the Postal Service pre-fund retiree health benefits for all current and retired employees for 75 years in the future (a mandate no other government entity must comply with) while also requiring future Postal Service retirees to enroll in Medicare. “The legislation before us is an attempt to fix those rules that make it more difficult for the Postal Service to deliver essential services and do it in a cost effective way,” said Peters. “It is something that has been discussed here in Congress for a decade or more. A decade or more. This is not an issue that just came out of nowhere. This is something we’ve been trying to fix for nearly a decade. Over the last year and a half, we have been working on bipartisan, bicameral legislation bringing people together and saying let’s just focus on what is common sense.”

Despite assurances  that the bill, which earlier this month passed the House 342-92, would get a vote last week from Senate Majority Leader Chuck Schumer (D-N.Y.), it remains in limbo after Sen. Rick Scott (R-Fla.) blocked it from proceeding due to a minor clerical error.

Scott said on the Senate floor that while he “absolutely supports getting something done to reform the postal service” he believes the bill as currently written “doesn’t fix the underlying issues” and wants the legislation to instead proceed through the Senate committee process.

In response, Peters said that despite broad bipartisan support for the bill, “a procedural blocking technique” was slowing down the effort and that “every day we wait, it puts the Postal Service in more jeopardy. It’s time for action now.”

He also noted that since 2000, there had been five similar clerical mistakes in the transfer of a bill and that in all five instances they were settled quickly, “because people say it’s just a mistake; let’s move on with the business of the people. Let’s not play games.”

Schumer said because of Scott’s objection, a lengthy procedural process will be needed to approve the bill and bring it up for a vote. While he still predicts it will pass, it can’t be taken up again until senators return from break on March 7.