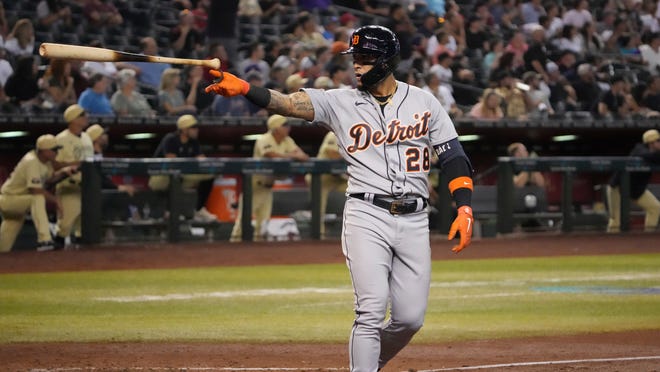 Where: Chase Field in Phoenix.

JEFF SEIDEL:How Cam Vieaux walked on at MSU, turned down Tigers and had magical MLB debut

Game notes: The Tigers will play a second game with temperatures bordering 100 degrees outside the park, following their 5-1 victory in the series opener Friday. Faedo, a rookie with a mere 44⅓ major-league innings, is from Florida so he’s no stranger to high temps. He has been knocked around for 12 runs (11 earned) in his last two starts while recording just 22 outs.

Javier Báez has been hot for the Tigers since sitting out the series finale against the Chicago White Sox last week. Since then, he’s 12-for-31 (.387) with four home runs, three doubles and a triple. the highlight? A grand slam on Friday night, making him the third Tigers shortstop to homer in at least three straight games. (The others? Carlos Guillen in 2007 and Dick McAuliffe in 1966.) And the usually walk-averse Báez has drawn two free passes in that span while striking out just twice. Overall in June, he’s 17-for-65 (.262) with nine runs and 10 extra-base hits over 18 games. He also has a home run and a .303 batting average over 33 career at-bats vs the soft-tossing Davies. Tucker Barnhart, who also saw a lot of Davies during his days in the National League Central, hasn’t fared quite as well, with one home run and a .190 average in 21 at-bats. No other Tiger has faced Davies more than three times.

The Diamondbacks are improved from a 110-loss season in part because they’re playing nearly .500 ball in Phoenix, with a 17-20 home record. Davies has been around a while — four teams in eight seasons — but this will be just his second start vs. Detroit. The teams finish the series with a 4:10 pm start Sunday before the Tigers head to San Francisco to play the Giants beginning Tuesday and the Diamondbacks host the division rival San Diego Padres.