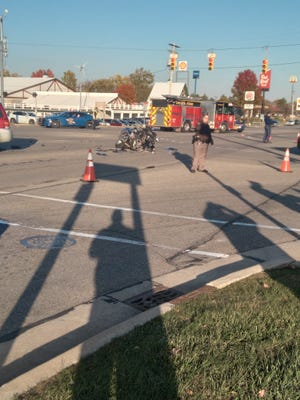 DELTA TWP. − A busy intersection was closed for more than two hours on Thursday afternoon and evening while police investigated a crash involving a passenger vehicle and a Michigan State Police trooper riding a state motorcycle.

A trooper with MSP’s First District Motor Unit was driving south on Canal Road about 4:20 pm when he collided with a northbound vehicle whose driver was turning left onto westbound West Saginaw Highway, state police said on social media.

The trooper was taken to a hospital with undisclosed injuries. Police did not release the trooper’s condition Thursday evening. The driver of the other vehicle was not injured, according to the post on Twitter.

The crash remained under investigation, and the cause had not been determined, state police said.

A heavily damaged motorcycle and a compact SUV were visible in the center of the Saginaw and Canal intersection on Thursday evening, and drivers were not being allowed to cross through the intersection.

The intersection was reopened about 6:50 pm