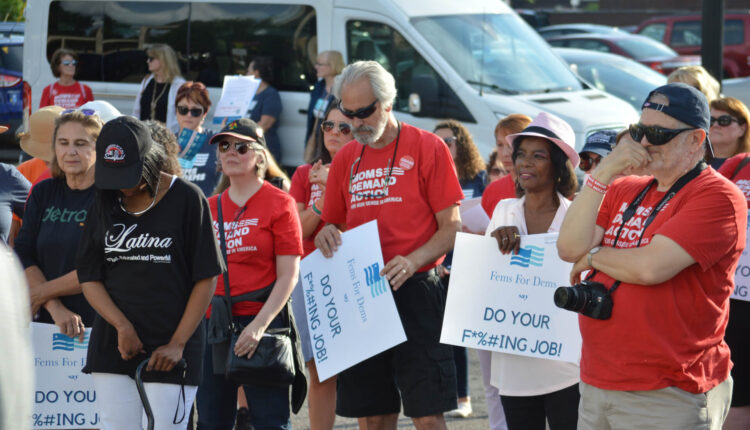 Michigan Democrats renewed their call for gun reform legislation in the wake of a school shooting at an elementary school in Texas.

Democrats introduced a number of gun reform bills in 2021. After at least 19 elementary students and two adults were killed Tuesday at an Uvalde, Texas, school, Democratic lawmakers on Wednesday tried to move legislation, but their attempts failed in the GOP-controlled Legislature.

“Every one of the recent tragedies we’ve seen is one too many, but the nearly unending nature of these mass murders is staggering. We are standing exactly where we have stood for years — demanding support of reasonable and responsible changes to protect our children,” said House Minority Leader Donna Lasinksi (D-Scio Township). “Inaction is simply unacceptable. We are ready.”

The measures were rejected by the House.

House Bill 5066 & Senate Bill 550: Require firearms to be properly secured to prevent accidental injury/death when the firearms could be accessible to minors. The bills create criminal penalties for failing to secure a firearm that is obtained by a minor and possessed in public or used in a reckless manner or to inflict injury or death. Introduced on June 17, 2021.

In the Senate, Democrats used a procedural move to discharge four safe gun storage bills from committee so the full Senate could vote on them. However, the Republican majority then sent the bills to the Government Operations Committee. State Sen. Dayna Polehanki (D-Livonia) tweeted that that is where “bills go to die.”

“There are political solutions. But there are just as many spiritual solutions,” he said.

Polehanki said that Wednesday’s session was cut short by Republican leadership to “prevent Dems from giving speeches about Uvalde.”

Michigan experienced its own mass shooting at Oxford High School in November, leaving four students dead and seven people injured. The gunman, 15-year-old Ethan Crumbley, is charged with murder and other counts for carrying out the shootings with a gun gifted to him by his parents, James and Jennifer Crumbley.

“From school shootings to suicides, so many of the tragedies we are sadly accustomed to are preventable,” Manoogian said. “The very least we can do as a society is to make sure that children don’t have access to guns.”

Sen. Rosemary Bayer (D-Beverly Hills) and Rep. Brenda Carter (D-Pontiac), the co-chairs of the Michigan legislative Firearm Safety and Violence Prevention Caucus, said in a statement Wednesday they are “outraged and disturbed at the lack of policy solutions, votes, and action … not only from Michigan’s elected Republicans, but from elected Republicans around the country who refuse to even acknowledge that gun violence is a public health crisis.”