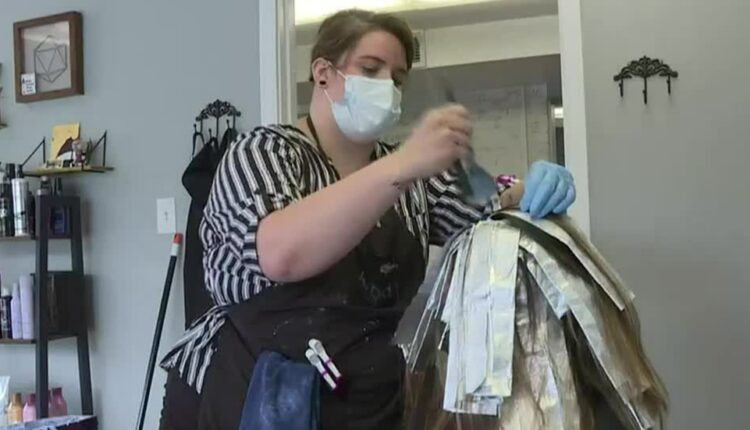 LANSING, Mich. (WILX) – A guy and a girl walk into the same hair studio and ask for the same haircut — but the woman pays significantly more.

This is a regular occurrence in hair salons but one Lansing salon is eliminating the gender gap from its pricing. The Hive Hair Studio bases its pricing on hair length and service not gender.

Meredith Hazergian sits in a chair as she’s covered in hair foils. It’s her first time coming to the Hive Hair Studio. She said just in her first hour getting her hair done, she noticed something different.

“No one’s taken the time to ask me how I’d like my hair done before or what I want it to look like,” said Hazergian.

Before coming to Hive Hair Studio, Hazergian said she never had a hairstylist try to understand her and her style. Lexan Cranfill, her stylist, pays attention to detail as she foiled Hazergian’s long dark hair. They are getting her ready for summer with highlights.

“I decided to do hair because I wanted to help people,” said Cranfill.

Cranfill co-owns The Hive Hair Studio with two other stylists, Jamie Ferris and Katie Donaldson. When they opened in 2020, they knew they wanted to change how things were typically run in salons. For starters, they would call it a hair studio as opposed to a salon or barbershop. That way, everybody feels welcome.

“We chose to go with the Hive Hair Studio as opposed to Salon in the hopes of making it not so narrow,” said Donaldson.

They also knew they wanted to create a gender-free pricing model — something they said was a no-brainer from the start.

“If a woman comes in and they want a pixie cut — I don’t believe that it should be $40 and then a male comes in and it is just $25 based on that,” said Donaldson.

Most women pay more for haircuts than men. In many cases, women pay about $10 more than men for the same exact haircut — in some places, they pay even more. Hive Hair Studio says their model eliminates that gap. At Hive Hair, it’s about the haircut itself, not who’s getting the cut.

Donaldson and Ferris said fair pricing was important. However, to the hairstylists, it means so much more.

“It’s like really creating a homey — comfortable space has always been the objective here,” said Ferris. “As the world’s changing we’re hoping that everybody will kind of follow along — and be able to create these spaces for everyone.”

As Cranfill finished foiling her new client’s hair, she said she wants her clients to feel welcome from the moment they walk in. She wanted to create a place where nobody pays more solely because of their gender and where everybody feels welcome — no matter who they are.

“So for me helping someone feel their best and look how they feel most comfortable is like invaluable,” said Cranfill.