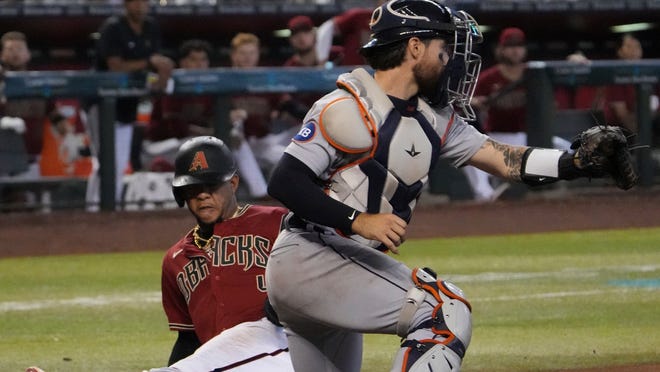 PHOENIX — Beau Brieske grew up watching baseball games at Chase Field. Brieske, a native of Chandler, Arizona, returned to his hometown ballpark this weekend with the Detroit Tigers.

In Sunday’s series finale, the 24-year-old stood on the mound and pitched in front of his family and friends. The Diamondbacks crushed Brieske for five runs. He didn’t escape the fourth inning.

“When you go to the bullpen that early, you’re asking a lot of guys to be good,” manager AJ Hinch said. “It seemed like we were just not executing when we really needed to.”

Offense wasn’t at a premium for either team.

The Tigers allowed five runs in the sixth inning — all against right-handed reliever Will Vest — which led to an 11-7 loss after back-to-back wins in the three-game series.

Entering the sixth, the Tigers (28-44) were in position to sweep the series. The offense had been rolling, and despite poor pitching, the game was tied, 6-6. The Tigers, by the way, finished with eight hits and six walks with 13 strikeouts.

“We were kind of a mess on the mound, which was unusual,” Hinch said. “We’ve been usually throwing strikes and being able to get out of the messes that we’ve created. Today was the opposite.”

Vest, who recorded all three outs in the sixth, faced eight batters and threw 30 pitches.

The Diamondbacks took the lead on an RBI single from Pavin Smith, then increased the lead to 8-6 on a sacrifice fly from Buddy Kennedy.

Daulton Varsho received a changeup down the middle and blasted it 436 feet for a three-run home run to right-center field, giving the Diamondbacks an 11-6 lead.

Vest gave up five runs on four hits and one walk in his inning.

“He had a few days off,” Hinch said, “so he may have been a little over-fresh, but he’s been so good for us the entire season. Today will be a problem.”

The Tigers scored one run in the top of the ninth inning, when Riley Greene grounded into a force out to score Kody Clemens.

The Tigers opened the high-scoring clash with two runs in the second inning.

Spencer Torkelson advanced into scoring position by ripping a double to the left-center gap off Diamondbacks left-hander Dallas Keuchel. He wasted no time, either, pounding a first-pitch sinker.

“The first time through the order, I thought we had a good approach,” Hinch said.

Eric Haase followed with a single, and Willi Castro cleared the bases with a triple — his second this season — for a 2-0 advantage. He clobbered the ball with a 102.4 mph exit velocity.

The Diamondbacks answered with two runs in the bottom of the third inning, as Brieske needed 30 pitches to record three outs. Carson Kelly hit a solo home run, and Christian Walker — with the bases loaded — tied the game with a sacrifice fly.

The sacrifice fly could’ve been a bases-clearing hit. Greene, the rookie center fielder, hauled in the ball with a diving catch in the left-center gap to take away extra bases.

With two outs in the fourth, the Tigers regained the lead, 3-2, with three consecutive base runners against Keuchel: Jonathan Schoop (single), Harold Castro (walk) and Robbie Grossman (RBI single).

“As the outing went on, his stuff got a tick better,” Hinch said. “As a veteran guy, he also adjusted to the approach that we had and got through his outing.”

A two-out RBI single from Jose Rojas knotted the score, 3-3, in the bottom of the fourth inning. The single chased Brieske from his 12th career MLB start, but he was still responsible for the runners on base.

“He yanked a lot of fastballs out over the plate,” Hinch said. “It got to the point where, for us to win that game, we needed to get out of the situation in the fourth, and we didn’t. Once you go there, you got a lot of outs left that you have to cover .”

Brieske threw 44 of 75 pitches for strikes.

The Diamondbacks posted a three-spot in the bottom of the fourth, but the Tigers got those runs back in the top of the fifth with a three-run home run from Haase, his fourth homer in 2022.

“He’s played two out of the three games here, and he’s dangerous when he stays inside the zone,” Hinch said. “We had a little bit of chase across the board, Haasey did as well, but when he gets the ball in the zone, he can hit.”

Keuchel exited after walking Greene with one out in the fifth, and right-handed reliever JB Wendelken began his outing by walking Torkelson. Haase made him pay by hammering a first-pitch slider into the left-field seats.

The Diamondbacks tied things up, 6-6, in the bottom of the fifth on Kelly’s sacrifice fly off righty reliever Wily Peralta.