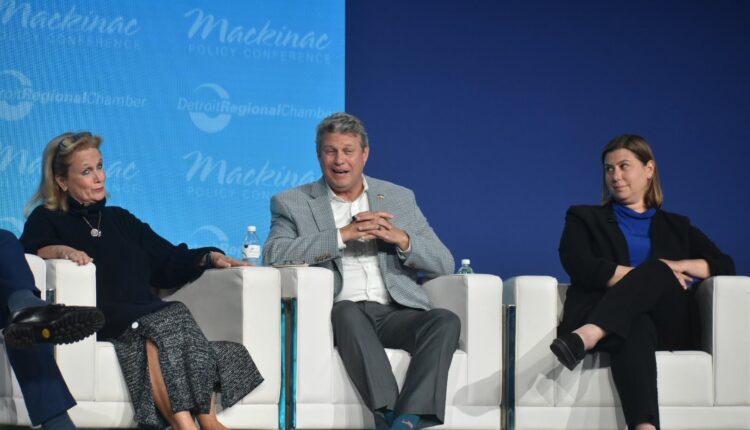 U.S. Rep. Bill Huizenga (R-Zeeland) was the sole GOP member to participate in a congressional panel discussion Wednesday centered around the topic of civility, which took place in Mackinac Island’s Grand Hotel as part of the annual policy conference on the island.

The Detroit Chamber of Commerce, which sponsors the conference, noted on the event listing that invites extended to other Republican members were “pending.”

The panel members emphasized bipartisan accomplishments like support for the U.S. Postal Service, while acknowledging the increasing polarization that has made bipartisanship challenging over the recent years.

Most bipartisan teamwork goes unnoticed because members who are “throwing rocks” get the most press attention, Peters said. Huizenga said that automotive and manufacturing issues generally garner the most cooperation across the parties.

It wasn’t long before Democratic panelists turned to the topic of gun control.

On May 14, a white supremacist killed 10 Black people at a supermarket in a predominantly Black neighborhood in Buffalo, N.Y. Ten days later, another mass shooting at an elementary school in Uvalde, Texas, left 19 children and two teachers dead.

“We don’t have to live like this,” Stabenow said, speaking on the unwillingness of Republican lawmakers to let gun control measures pass after mass shootings. She said some GOP members are willing to work out a compromise, but Senate Minority Leader Mitch McConnell (R-Ky.) is resistant, making it necessary to “go around him.”

Republicans in Congress are currently in talks to reach a bipartisan agreement with Democrats on gun legislation, although similar talks in recent years have so far not been fruitful.

“It’s going to take an awful lot” to reach an agreement on that end, Peters said, but said he still holds out hope.

Slotkin, who is a member of the bipartisan Problem Solvers Caucus currently in talks to act on gun control, echoed Peters in noting that there is an unbalanced “incentive structure” that rewards brazen partisanship rather than behind-the-scenes bipartisan work.

Dingell said there is not nearly as much bipartisan support on issues like aid to Ukraine as there should be. After Huizenga noted that divided politics have “gotten much more vicious,” Dingell said that she and her late husband, former U.S. Rep. John Dingell (D-Dearborn), were once able to be close with Republicans like former U.S. House Speaker Newt Gingrich.

“I look back at those days,” Dingell said, when everyone in a room could come together regardless of party differences, and even respectfully disagree with each other, because they “knew they were [all] Americans, and we needed to work things out.”