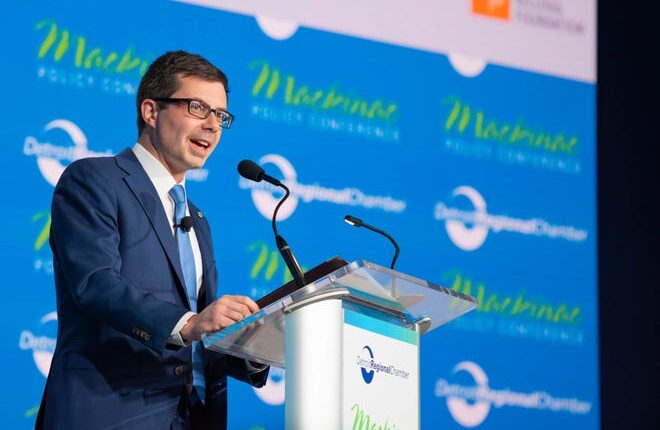 Mackinac Island — US Transportation Secretary Pete Buttigieg says the potential rollback of abortion rights could mark a watershed moment in American history, where civil rights are rescinded rather than expanded.

“The broader question that is before us now is did we live to see the high-water mark of rights and freedoms in this country?” Buttigieg asked Wednesday during an appearance at the Detroit Regional Chamber’s Mackinac Policy Conference.

He added in an interview with The Detroit News: “I don’t think it stops at Roe.”

The appearance came several weeks after a leaked Supreme Court opinion draft indicated the justices planned to reverse the landmark 1973 decision in Roe v. Wade, who has protected the right to abortion in the US for decades.

Buttigieg traveled to Mackinac Island Wednesday morning after spending Memorial Day weekend at his house in Traverse City with his husband, Chasten, and their twin babies, whom they adopted in September.

“The fact that the very existence of our household, at least legally speaking, came about by the margin of a single vote on the Supreme Court,” he said, “has you really thinking at a moment like this about the personal stakes of what appears to be a continued push to roll back rights.”

The Supreme Court decided with a 5-4 vote in 2013 that the Fourteenth Amendment to the Constitution guarantees same-sex couples the right to marry. Chasten and Pete Buttigieg met in 2015 and married in 2018. Buttigieg became the first openly gay person to become a Senate-confirmed Cabinet secretary in 2021 after being nominated by President Joe Biden.

Buttigieg told The News there’s still room for the leaked Roe opinion to change, but there are plenty of reasons to expect the decision will be issued as drafted and that the repercussions won’t be confined to abortion.

“That’s obviously close to come for the LGBTQ community. It’s close to home for a lot of people,” he told the News.

“It’s also in the context of decisions that have happened even before the court had its current makeup that affected the strength of our voting rights… Really, really important things are at stake here.”

During a keynote address and interview at the Grand Hotel, Buttigieg also discussed his agency’s efforts to solve supply chain snarls, boost wages for truck drivers, clarify rules for autonomous vehicles and accelerate the transition to electric vehicles.

Montana Hires a Medicaid Director With a Managed-Care Past