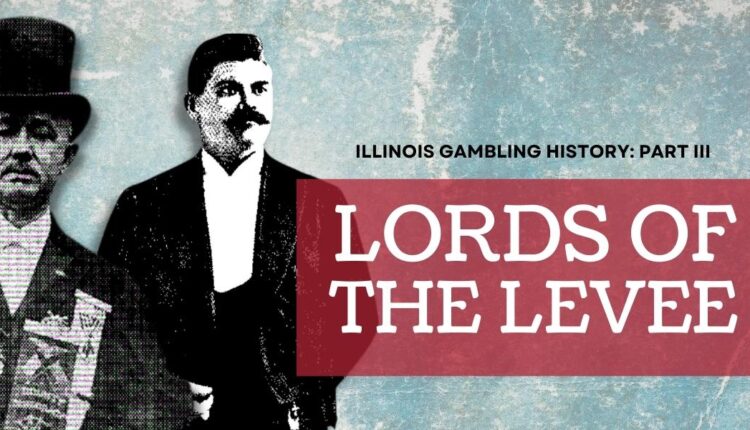 In our third Illinois Gambling Crime History installation, we break from the extended biographies to introduce a few more people, places, and events that shaped the state’s early gambling years.

Read on for the lowdown on crooked politicians, a notorious ball, and a floating gambling haven.

The Lords of the Levee

By the end of the 19th century, Chicago had earned a reputation for dubious moralspartly due to ongoings in the city’s 1st ward.

Home to Chicago’s central business and crime sectors, the 1st ward’s looping elevated rail system built as the century turned earned it the title of “world’s richest.” The “loop” also lent its name to the surrounding neighborhood, including a 4-block redlight district called the levee.

Like many frontier-era towns, the redlight district took its name from the nearby docks. unsurprisingly, brothels, saloons, dance halls, and gambling houses thrived throughout the vice-heavy ‘hood.

Indeed, much credit for the illicit success went to 1st ward aldermen John “Bathhouse” Coughlin other Michael “Hinky Dink” Kenna. The notoriously crooked pair controlled the ward throughout much of the 20th century’s first half.

Lords of the Levee, Wendt & Kogan

Under their protection, gambling and vice flourished, Coughlin and Kenna earned the title “Lords of the Levee.” The Levee, in return, made the pair a lot of money.

Reportedly, the councilors collected more than $15 million in protection fees by the Levee’s closure in the early 1910s. In today’s dollars, that would be closer to $451,533,333.33. That’s a pretty big rake.

The duo was also part of Gray Wolvesa broader group of corrupt aldermen who took bribes for city contracts. McClure’s Magazine first called the group wolves for “the color of their hair and the rapacious cunning and greed of their natures.”

By the mid-1920s, however, the pair’s power was waning as mobsters Johnny Torrio other Al Capone appeared on the scene. Fortunately, Capone took a liking to the “Lords.” He appreciates their long-standing loyalty to Torrio and his predecessor, Jim Colosimo.

You’ll hear more about that trio in a future installation. For now, read on for a bit more on each of our “Lords.”

GET TO KNOW MONT TENNES, US RACE WIRE CZAR, IN PART 2

John Joseph Coughlin was born in Chicago in 1860. His family struggled with poverty after their moderately successful grocery store burned in the Great Chicago Fire.

Coughlin Jr., however, was never particularly concerned with the subsequent hardship. According to Lloyd Wendt other Herman Koganauthors of a book chronicling the Lords, Coughlin said:

“Money didn’t mean anything to me. I’m glad that fire came along and burned the store. Say, if not for that bonfire, I might have been a rich man’s son and gone to Yale—and never amounted to nothing!”

Eschewing the easy road, Coughlin followed a unique path, earning his nickname as a bathhouse masseuse. But before long, he owned a saloon and a collection of bathhouses himself.

Despite a lack of political experience, Chicago’s 1st ward elected Coughlin as a representative in 1892. That election would start a 50-year political career that only ended with his death. The stretch made him Chicago’s longest-serving alderman until 2014, when the 14th ward’s Edward Burke surpassed Coughlin’s record.

Outside of politics, Coughlin drew notice for his wild fashion, dubious poetry, and affinity for horse racing. Initially, at least with the latter, he often proved successful. Over time, however, his luck ran out, and Coughlin died penniless in 1938.

In 2012, an NBC news retrospective ranked Coughlin the third most corrupt official in Illinois history. His friend and partner-in-crime, Kenna, took the 4th spot in the review’s corruption rankings.

Michael Kenna was born in 1857 at Polk and Sholto (now Carpenter) streets near Chicago’s New West Side neighborhood.

At 10, he left school to hock newspapers. By 12, Kenna (now an orphan) borrowed $50 to buy a newsstand. The stand was so successful he repaid the loan within weeks. McKenna sold newspapers out of that location until 1877.

According to legend, around this time, Chicago Tribune publisher, Joseph Medill, started calling Kenna “Hinky Dink.” Kenna claimed ignorance of the origin but, when pushed, said it stemmed from his swimming hole antics. Regardless, Kenna only stood a ‘dinky’ 5’4.

After a stint in Colorado working for a newspaper in Leadville, Kenna returned to Chicago, opening a saloon. At The Workmen’s Exchange, he exchanged meals for indigent votes, and by 1882 his saloon was a roaring success. As a result, he became a fixture in the local democratic organization.

Kenna first encountered Coughlin during this time, though the men wouldn’t become friends until later. But, by 1893, they’d created an alliance. Coughlin, already an alderman, would be the public face while Kenna worked behind the scenes.

However, after losing his first run in 1895, Kenna joined Coughlin as 1st ward alderman in ’97. He remained an alderman alongside Coughlin until 1923, when Illinois General Assembly reduced councilors per ward from two to one. Never one for council meetings, Kenna stepped down. He would, however, return to public service from 1939-43, elected unopposed to fill Coughlin’s seat after his death.

When Kenna died of diabetes and myocarditis at the Blackstone Hotel in 1946, he was a millionaire. While he left $33,000 ($504,328 today) for his mausoleum build, his heirs fought over his estate. Sadly, in the commotion, the money disappeared. Instead of a mausoleum, an $85 ($1,299) headstone marks Kenna’s grave.

Reportedly, the creation of the extravaganza came from a need to maintain cash flow for their other endeavors (namely, funding bribes and paying for police protection). A fundraising event that raised money for a local disabled musician provided the blueprint, despite authorities recently shutting it down.

Historically, the charity parties were peaceful events, with police as honored guests. However, a clash between attending officers at the 1895 fundraiser led to public outcry and forced its end.

In the aftermath of the cancellation, Coughlin proposed the pair throw a similar bash with themselves as the beneficiaries. Although Kenna was not as keen, he nonetheless supported Coughlin’s pursuit. As a result the First Ward Ball made its debut the following year.

According to reports, suppliers offered beer, wine, and spirits at a discount as invitations hit the mail. Service staff, expecting substantial tips, even paid $5 to serve at the event.

Reportedly, Coughlin kicked off the grand march with the infamous Everleigh sisters at his side. Minna and Ada were proprietors of the Everleigh Club, a high-end brothel in the Levee. Accounts say he entered in style, in an extravagant green dress suit with a mauve vest, pink gloves, silken top hat, and yellow pumps.

By nearly all accounts, that first, First Ward Ball was a roaring success.

Indeed, the party soon outgrew its initial home at the 7th Regiment Armory. It moved to the Chicago coliseum to accommodate larger crowds. At its peak, the ball welcomed ten to 20 thousand attendees and raised up to $50,000 annually for the councilors.

By 1908, however, the ball had become so notorious that newspapers across America reported on its wicked immorality.

That year, reports say revelers downed 40,000 quarts of champagne and beer as rowdy drunks tore clothes from unattended women. french annie, a local madam, even stabbed her boyfriend with a hat pin. However, what he might have done to prompt the assault was not reported.

The following year, just weeks before the 1909 extravaganza, the city revoked the ball’s liquor license. As a result, Coughlin penned his shortest poem.

For the final year of the “Ball,” Coughlin and Kenna presented a sober concert instead of the usual liquor-fuelled revelry. Unsurprisingly, the dry event attracted a smaller audience of about 2,500 guests, a far cry from previous turnouts. Instead of a grand march, a classical orchestra entertained guests seated in wooden chairs nailed to the coliseum floor.

By 11 p.m. that night, the First Ward Ball closed its doors for the last time.

The City of Traverse

Despite its misleading name, the City of Traverse It wasn’t a city at all. It was a freight and passenger vessel built in Ohio in 1871. For its first 35 years, the oak-hulled ship carried passengers and cargo between Chicago and Traverse City, Michigan. However, in 1905, the boat became a floating gambling house run by Chicago bookmakers Bud White, Harry Perryand Charles “Social” Smith. The infamous ship skirted illegality by only taking wagers once outside Illinois waters — and beyond state reach.

The City of Traverse was the first ship in US history devoted exclusively to gambling. On the days it sailed off Whiting, Indianaanywhere from 200 and 800 men were onboard, betting on the horses.

“The people of Chicago at least have been provided with a practical opportunity to throw their money into the lake,” wrote the Chicago Tribune on day one.

For nearly three years, the Boat operators evaded Chicago police, who had little legal recourse when the boat was on the water. However, that didn’t stop Chicago authorities from trying to ground the vessel.

Happily for the CoT’s operators, while highly conservative, Indiana’s Governor, J Frank Hanley, believed in jurisdictions controlling matters independently. While he hated that Chicago bookmakers were using Indiana for financial gain, he didn’t feel it was Indiana’s job to challenge them. Any challenge was up to Chicago’s authorities.

In 1907, Chicago’s police shifted tactics, going undercover, boarding the ship, and gathering evidence. Later, officers waited to arrest the gamblers when the boat docked in Chicago.

Unfortunately for the police, things didn’t go as planned. Instead, the bookmakers hired tugboats to carry the gamblers to shore at Whiting and Indiana Harbor. From there, players returned to Chicago by train.

The next time, knowing the tugs would land in Indiana, the police planned to follow and arrest bettors as they stepped across the Illinois state line.

While the plan did create something of a scene on Whitting’s beach, it only amounted to six arrests. With the victory, bookmakers planned to hire more tugboats to keep the gambling haven afloat. But, less than two weeks later, those plans changed, and the City of Traverse stopped sailing.

A few weeks later, the boat returned to its previous life, carrying passengers and fruit across the lake between Michigan and Chicago. But, after nearly three years on the water, the City of Traverse earned its place in history as the US’s first full-fledged gambling boat.