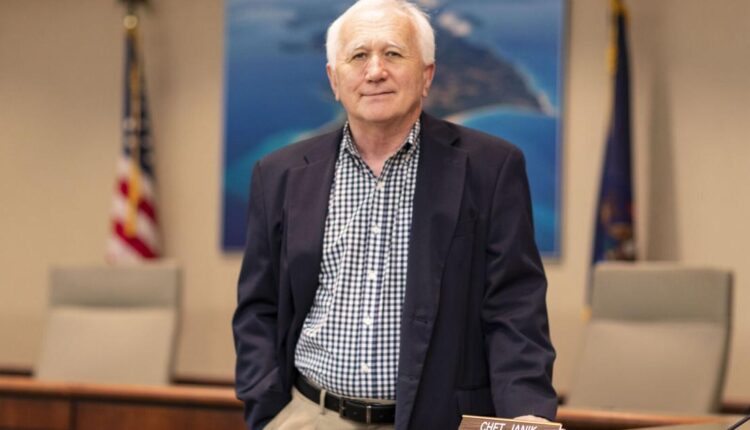 SUTTONS BAY — Three candidates for Leelanau County administrator will be interviewed a second time later this month and in early October.

They are Deborah B. Allen of Traverse City, Patrick G. Lamb of Suttons Bay and Karl F. Fulmer of Sioux Falls, SD Interview dates have been tentatively set for Oct. 7 for Lamb and Fulmer, and Oct. 11 for Allen.

Others that were interviewed are Kyle R. Harris of St. Charles, director of grower relations for the Cherry Marketing Institute; Dan Ryan of Northville, administrator in the IT and human resources departments at a Livonia-based business law firm; and James Palenick of Middletown, Ohio.

Another candidate, Shawn Fletcher of Dodge City, Kan., assistant administrator in Ford County, Kan., and a pastor did not show up for his interview and did not respond to attempts to contact him, according to Chet Janik, Leelanau County administrator.

Janik announced earlier this year that he was planning to retire in December. In all, 68 people applied for the post.

At a special Leelanau board meeting held Wednesday, commissioners voted 5 to 1, with Commissioner Patricia Soutas-Little absent, to give the three candidates a second look. Commissioner Melinda Lautner voted “no.”

Lautner had wanted to give a second interview to Harris, although in a straw poll taken early in the meeting to determine the top two or three candidates, Lautner was the only commissioner that gave him the nod.

Allen and Lamb both got six votes in the straw poll and Fulmer got three, although Commissioner Rick Robbins later said Fulmer was in his top three choices. Palenick, who has been fired from three city manager posts since 2002 and “parted ways” with a fourth in March, did not get any votes in the straw poll.

Lautner said Harris has confidence and while he has little experience in government, could grow into the position.

“He could be molded into an ideal county administrator for Leelanau County,” Lautner said. “That might take some time, though.”

“I thought he was confrontational and bragged about always being on the side to criticize,” Wessell said. “Some of that’s OK, but it made me a little nervous.”

Fulmer was chosen for a second interview because of his experience working with governmental agencies, his knowledge of grant-writing and his housing experience, especially since Leelanau and its surrounding counties lack affordable homes for working people.

While Commissioner Debra Rushton voted in the end to give Fulmer a second interview, she said he has some great qualities but she’s not sure the county is looking for a housing commissioner. She said he has also moved around a lot.

“I think we’re looking for someone who wants to put roots down and stay here and become a part of our community,” Rushton said.

The candidates’ social media backgrounds and references will be checked before the interviews. An in-depth background check, including any criminal records, will be done after the final candidate has been chosen and before they are offered the post, Janik said.