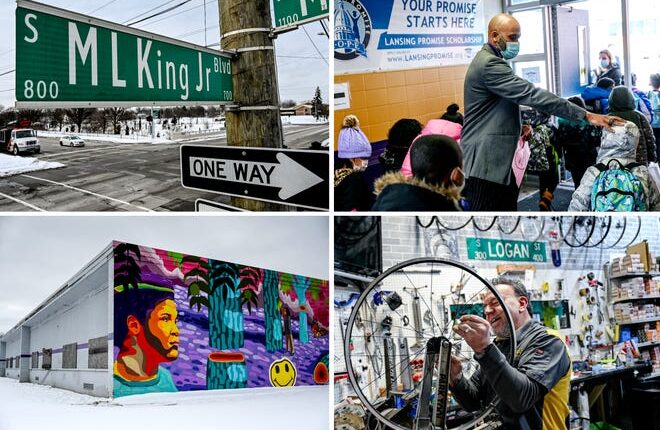 Martin Luther King Jr. Boulevard, a major north-south thoroughfare in Lansing, has long been an integral part of the city. Thousands travel along it daily and likely give little thought to its name.

But the road wasn’t always named after King. It was changed from Logan Street in 1994 to honor the civil rights leader who was assassinated in 1968.

That change was a long time coming.

It took eight years, from 1986 to 1994, for the city to rename the thoroughfare because of what a 1989 State Journal article described as “racially motivated stubbornness on both sides.”

The first request to change the name of Logan Street to Martin Luther King Jr. Blvd. came in 1986 as a petition from a group of local pastors. Three years passed before the City Council took action, adding King’s name to the street.

One City Council meeting in April 1989 ended with council member Lucile Belen, who was against renaming, and The Rev. Joseph Graves Sr., who was leading the charge to honor King, shouting at each other.

The then-mayor’s executive assistant, Cleophus Boyd, said in 1989 the council’s failure to accept a King compromise after three years “fans the fires of perceived racism and discord.”

The Rev. Melvin Jones, who was instrumental in the fight to get the name changed, said this year what stands out in his memories was the overall resistance to the change.

During one of the 1989 council meetings, Jones recalled the room was so crowded people couldn’t fit on the floor. There was no march, but the community gathered in support of the change. The tension, for the most part, he said, came from businesses who did not want to change their addresses to include MLK.

In April 1989, at the height of the fight, supporters of renaming taped makeshift signs, made with cardboard and black marker, that read “King Blvd.” below the Logan Street signs. At this point, the council was split 4-4.

That month, 300 people jammed into City Hall to support the renaming, according to State Journal archives.

“This goes much deeper than just the naming of a street. I think to get beyond this we need to do some serious looking at ourselves and start a healing process and a learning process to really understand everybody,” Blair said. “Somewhere here was lost the sensitivity and learning to listen to other people’s feelings.”

Belen, one of the four councilmembers who voted against it, said she didn’t think it was fair to inconvenience the residents and businesses on Logan.

Logan Street was named for Civil War Gen. John Logan, who conceived and campaigned for a national day of recognition for people killed in wars, the holiday that later became Memorial Day.

At the height of the fight over the renaming, in April 1989, researchers at the Lansing library said local interest in Logan soared.

“We’ve been getting so many calls that we’ve started keeping a note about Logan at the research desk,” one researcher told the State Journal in 1989.

In 1992, the argument over what was now called Logan Street/Martin Luther King Jr. Blvd rose again, bringing about another public storm, according to State Journal archives.

The Pastors’ Conference of Greater Lansing submitted a petition to the council to drop Logan Street and solely have the street bear King’s name.

At a February 1992 City Council meeting, residents came forward for more than an hour to voice their opinions on the petition, according to State Journal archives.

Council member Ellen Beal said in 1992 she couldn’t rule out “simple racism” for why people were so opposed to changing the name of the street.

The vote in the council failed 4-3 and Logan remained on the street signs.

“If the city is unwilling to make a simple name change, then how can the city deal with greater issues of racism and discrimination?” The Rev. Lester Stone said in 1992. “If we have to fuss and fight just to remove Logan’s name , only God knows what it will take to make King’s dream a reality.”

Two years later, in 1994, the Council finally ended the fight once and for all, dropping Logan Street from the name.

Jones said it’s hard to know if things would be different should a similar fight happen in the 2020s.

“My best guess would be there would be less resistance,” Jones said. “But of course it’s difficult to make an assessment because of a difference in times. I think there is a lot more acceptance of Dr. King now than there was at that point.”