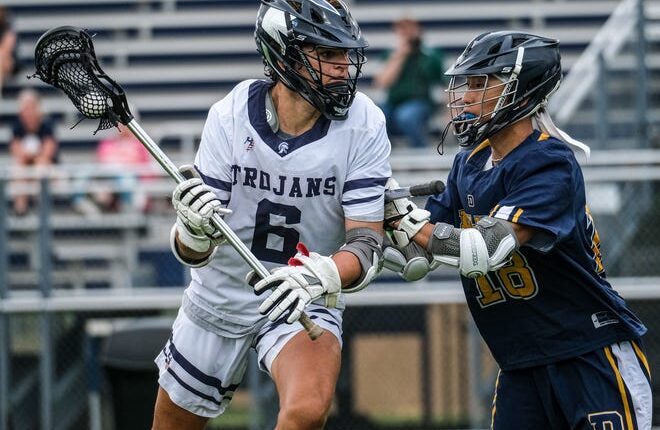 Now, the Trojans have a chance to get back to that level, and it started Friday with a regional quarterfinal against DeWitt.

East Lansing led 3-1 at the midway point of the first quarter, but rallied for five straight goals to take a commanding lead heading into the second quarter. That cushion proved insurmountable, as the Trojans moved on with a 19-8 victory and a spot in the regional semifinal Wednesday.

“It came down to effort on our guys’ part, and they showed a lot of it,” East Lansing coach Will Wismer said. “They wanted the ground balls and fought for every loose ball and I think that was a big difference in this game.”

Senior forwards and captains Marcus Haynie and Jackson Early combined for eight goals for the Trojans.

Early, a Hope commit, was dominant in the faceoff circle and his success there led to numerous quick goals and scoring chances.

“It’ takes a lot of training for faceoffs to get really good, but for me it’s anything I can do to keep the momentum going,” Early said. “However many I win means more possessions and it’s really helpful.”

Haynie, meanwhile, found his scoring touch in the second half after DeWitt’s defense focused on stopping him early. However, the attention on Haynie led to a lot of quality opportunities for the forwards around him.

“I’m happy with how we played as a team and we just wanted to come out of here with a win,” Haynie said. “The guys around me made my job a lot easier, I couldn’t have done a 19-8 victory without them. I can’t say anything but good things about them.”

East Lansing’s win was the final athletic event that will take place on the grass of Lynn C. Adams Field, home to some of the Lansing area’s most riveting games. East Lansing High School will be putting in a turf field in the coming weeks.

“It’s such an honor, talking before the game about all the teams and all the athletes that have played on this same field and this same dirt,” Wismer said. “We wanted to play for them and that’s what we did tonight.”

East Lansing (9-7) will face Dexter (13-3) in the regional semifinals at 5 pm Wednesday at Lansing Catholic High School. DeWitt’s season ends with a 4-8 record.