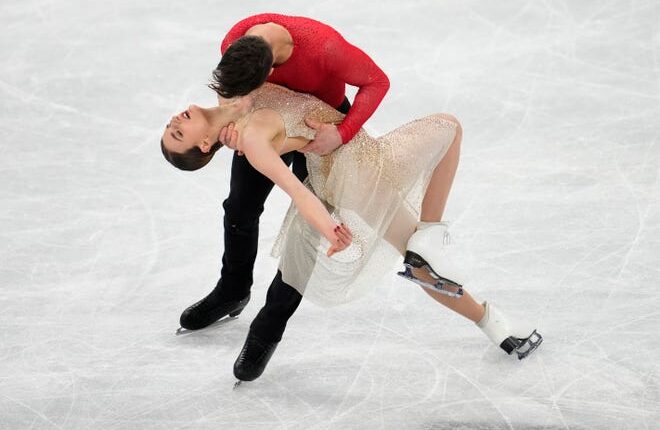 Beijing — Gabriella Papadakis and Guillaume Cizeron of France broke their own ice dance world record Monday, winning the Olympic gold medal that narrowly eluded them four years ago in Pyeongchang.

The last figure skaters on the ice for the free dance, Papadakis and Cizeron scored 136.15 points for their performance to “Elegie” by the early 20th century French composer Gabriel Faure. That gave them 226.98 points, beating their previous mark of 226.61 set at the 2019 NHK Trophy in Japan, and easily enough to hold off Victoria Sinitsina and Nikita Katsalapov.

The Russian world champions took silver with 220.51 points while the longtime American duo of Lansing native Madison Hubbell and Zachary Donohue, who have already announced their plans to retire, claimed bronze in their final Olympics.

Another set of Americans, Madison Chock and Ann Arbor native Evan Bates, finished just off the podium in fourth place.

One of the earliest pairings on the ice was Gleb Smolkin and Diana Davis, the daughter of embattled Russian coach Eteri Tutberidze, whose star pupil Kamila Valieva was awaiting a decision from the Court of Arbitration for Sport on whether the heavy favorite to win Olympic gold in the women’s program would be allowed to compete Tuesday night.

Tutberidze watched from an inconspicuous corner of Capital Indoor Stadium during her daughter’s performance.

“Diana feels more calm when Enteri supports her because, first of all, she’s her mom,” Smolkin said. “I think for everyone, it’s a great feeling when your family is right here, right behind you.”

Three couples separated themselves from the field on Saturday night, the first night of ice dance, when Papadakis and Cizeron broke their own rhythm dance world record. Sinitsina and Katsalapov were less than two points back while Hubbell and Donohue, riding a personal-best score to their “Rhythm Nation” program, kept their golden hopes alive heading into Monday.

Still, there were some soaring performances before those three teams took the ice.

The best came from Chock and Bates, good friends of Hubbell and Donohue and teammates of Papadakis and Cizeron at the Ice Academy of Montreal. The American champions bounced back from a mistake in their rhythm dance with a season-best rendition of their astronaut-alien love story to solidify their fourth-place finish.

Moments later, Hubbell and Donohue took the Olympic stage for the last time.

With newly crowned gold medalist Nathan Chen cheering from a section of flag-waving US fans, the two-time world silver medalists seemed to float across the ice. Hubbell and Donohue’s biggest mistake came on a lift that lasted a fraction over the 12-second limit, costing them a deduction, but they otherwise showcased the unique power and precision that’s come to define a decadelong long partnership.

It was enough for Hubbell and Donohue, the fourth-place finishers in Pyeongchang, to move onto the podium and add a bronze medal to those they’ve won in the team event at the past two Winter Games.

There is always one ice dance couple at the Olympics that sets the bar for everyone else, though.

That was Papadakis and Cizeron in Beijing.

Even after a season-best skate from Sinitsina and Katsalapov to briefly take first place, the French pair showed poise along with their usual brilliant technical ability and unmatched artistry. From their opening one-foot step sequence to their final choreographed lift, their striking performance was without fault.

The judges thought so, too.

They gave Papadakis and Cizeron the highest marks for their straight line lift, synchronized twizzles, combination spin and curve lift for a free dance score of 136.15 points. That was less than a half-point off their own record for the second segment of the ice dance competition but more than enough to stand atop the Olympic podium.

Where To Eat This Winter