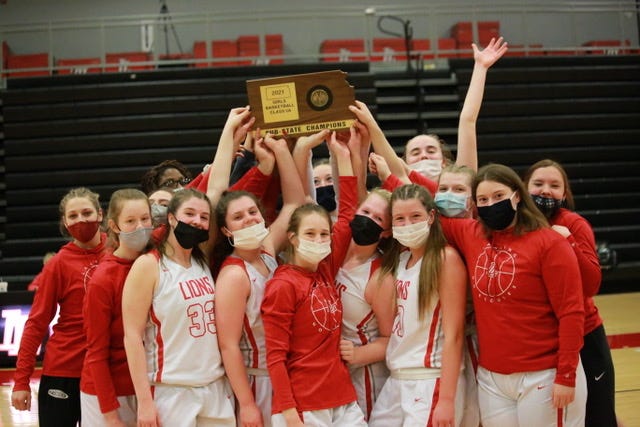 The Lions (19-3) finished in the last four places with a 64-51 win over Bonner Springs. This was a change compared to previous years, when quarter-finals were not played on the tournament grounds but on the venue.

“It’s kind of a double-edged sword,” said head coach KC Simmons, glad we won and can get going on Thursday. “

Although many Lions did not travel to Emporia for the quarter-finals, they already have national volleyball tournament experience.

Juniors Caitlin Bishop, Kamryn Farris and McKenzie Moburg have already finished third and second with the Lions, while the second Skylar Weaver and junior Mackenzie Manthe entered the team for second place last season. Simmons said the experience is important for a team on its third state appearance.

“If you are a winner, you are a winner,” he said. “You know what it takes to win and I think that’s one of our strongest attributes this year. You have been through so many competitive events and just know how to win. “

In a recent example, the Lions were less than 10 seconds behind Piper 31-30 in Friday’s Sub-State Championship. After a few last minute attempts to take the lead, the Lions kicked the ball under their hoop for final possession. Simmons said they played a piece that normally goes to Farris, but the pirates anticipated it and left the door open for Manthe to slide in and hang up to secure the state berth.

“We’ve been in situations all year long where we feel like things may not be going our way, but we never hang our heads,” said Simmons.

After Manthe put down the game-winning shot on Friday, he stole the show again in the quarter-finals on Monday. She started for a game high of 25 points and triggered the Lions in the first half with 11 straight points.

“She’s super trainable and always ready to work,” said Simmons. “It was nice to have a six-foot girl who can come in and score and do some things that we didn’t really expect at the end of last year.”

It’s not just a goalscorer who does the job for the Lions as Farris and Bishop each hit double digits on Monday and the entire team handed out 19 assists.

“When we start clicking, we feel like the only ones who can stop us,” said Simmons. “When we get the ball moving, move ourselves and play selflessly, we’re a really hard team to protect.”

The Lions encounter a mountain of an opponent in the semifinals when they take on St. Thomas Aquinas (18-2) – winners of four direct state championships – with three rotation players taller than two meters. Simmons said they have to play practically flawlessly to hang out with the Saints.

“We really emphasized that we had to take care of the ball,” he said. “Aquinas are not going to beat themselves, they are not going to flip the ball and if you want to win games you have to be close in the battle for sales.”

In a normal year, reaching the semi-finals of the state tournament usually guarantees two games with the semi-final game followed by the championship or third place game. Due to the circumstances of the pandemic, the third place game has been eliminated this year, meaning the Lions will have to win or go home on Thursday.

“We haven’t talked about the fact that there is no third place game because the focus is on getting to the championship,” said Simmons. “I look forward to our children having the opportunity to end the Aquinas series. They’re the four-time national champions for a reason, but they’re not going to win every national championship, they’re going to lose some time and how cool it would be if we were the team to knock them off that podium. “

The Lions and Saints are scheduled to tip at 7 p.m. Thursday in the White Auditorium on the Emporia State University campus. The game will be broadcast on the NFHS network.