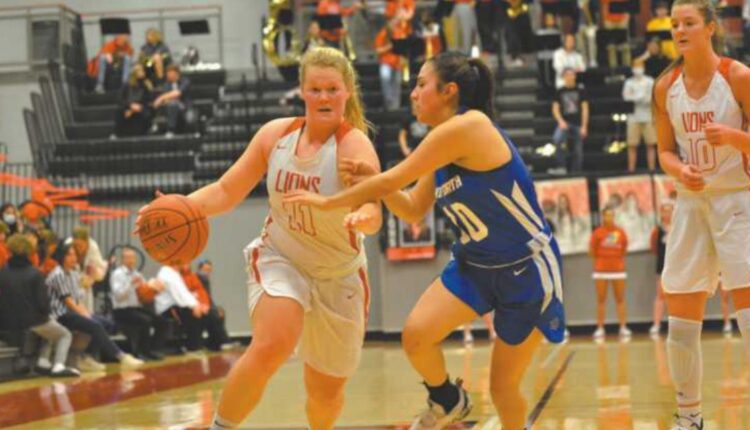 In their final regular season home game, Lansing’s four seniors did what they do best – win.

“I don’t think it’s even debatable. They’re going to go down as the best senior class in Lansing history regardless of gender. The number of titles and banners they’ve put in this building is second to none. Along with being great athletes, they’re just great, great kids and that’s why they’ve been successful. They know what it takes, and they don’t shy away from hard work. Their legacy is not done because hopefully we still have a lot more games in us. This senior class has meant the world to me. They’re awesome.” Behind a season-high 27 points from

Behind a season-high 27 points from Farris and 15 by Moburg, the Lions defeated rival Leavenworth 57-42 Tuesday night. “A big rivalry game on senior night

“A big rivalry game on a senior night is always going to be fun,” said Farris, with her hands full of balloons, the UKC Championship trophy and other senior night gifts. “It was a good team win.”

The Pioneers put up a fight as senior Misty DeLeon knocked down a 3-pointer to get Leavenworth within 31-29 with 4:55 remaining in the third quarter. “I really wanted to spoil senior night like that

However, Lansing answered with an 18-0 run before Kianna James made two free throws with 6:40 remaining in the fourth quarter. “At halftime, I think we all understood

“At halftime, I think we all understood that we weren’t playing the greatest and we needed to step up because we can’t go into sub-state playing like that,” Moburg said. “We all knew that. We knew we couldn’t sleep on them and we didn’t help in the second.”

Leavenworth’s biggest problem was turnover, finishing the game with 22.

“Turnovers is our Achilles’ heel,” Foster said. “We get anxious when the game gets tight. We’re just overanxious to try to make the play right now, so we get too antsy, and we give the ball up. Our turnovers turn into points for them and then turnovers become runs and we bury ourselves. You can’t win with that.”

DeLeon, who started for Leavenworth after Monece Thomas tweaked her knee during warmups, had eight points. “She didn’t know she was starting until

“She didn’t know she was starting until right before tip and I thought she came in and played really well,” Foster said. “We play hard. We just don’t play consistently. If we can get a stretch of minutes where we have consistent production on both ends of the floor, we can hang with anyone. We’ve shown that we can play with bigger and better teams. We’ve just got to put it together for four quarters.”

Readers and Tweeters Have Mental Health Care on Their Minds