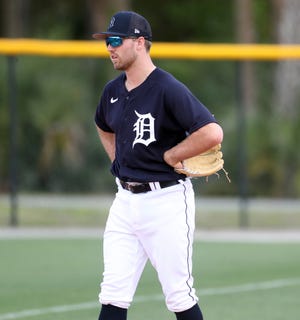 The Detroit Tigers called up Kody Clemens for his MLB debut.

A roster spot for Clemens, a left-handed hitter and versatile defender, opened Monday morning, when the Tigers decided to place outfielder Robbie Grossman on the 10-day injured list with a neck strain.

The Tigers plan to primarily use Clemens against right-handed pitchers.

“We don’t need him to be superman,” manager AJ Hinch said before Monday’s game at Comerica Park against the Minnesota Twins. “He’s not the answer to all of our problems, but this is an opportunity for him to elbow his way into the big leagues for the first time, and he’s earned that. … He’s performed his way here.”

TIGER’S NEWSLETTER: Time to check the warranty on these Tigers hitters

Clemens, the son of seven-time Cy Young winner Roger Clemens, is the Tigers’ No. 17 prospect, according to MLB Pipeline. The Tigers drafted Clemens in the third round, no. 79 overall, in the 2018 draft.

“If he can come up and do what he’s done in Triple-A, it’ll be a nice boost for us and a nice addition to the lineup,” Hinch said. “It’s going to create some crazy defensive alignments. Replacing Robbie, who’s all outfield, with an infielder is a challenge, but his bat is what got him here.”

His primary position, second base, is occupied by Jonathan Schoop, which means Clemens will get most of his MLB playing time at first base, third base and at the corner outfield spots.

Without Grossman, utility player Harold Castro will get more reps in the outfield, and fellow utility player Willi Castro — a recent mainstay in left field — will receive some starts in right field.

The Tigers considered calling up Clemens at least twice this season, but the organization went with other options on the 40-man roster. Clemens joined the Tigers’ 40-man roster last November.

Clemens, on his way to Columbus, Ohio, when he learned of his promotion, showed up to Comerica Park around noon for Monday’s 1:10 pm game, so he will be available off the bench.

He is expected to start Game 2 of Tuesday’s doubleheader.

“We’ve been very careful with when we’re going to call him up,” Hinch said. “Putting him on the bench makes you feel better, but it might not make you any closer to winning. But his name has been tossed around a couple different times. Now, we’re going to force him into the lineup.”

The timetable for Grossman’s return is unclear. Grossman, 32, is hitting .199 with a .241 slugging percentage, 21 walks and 51 strikeouts in 42 games. He experienced neck spasms in the batting cage before Sunday’s game, tried to play through the pain and was replaced in the lineup after one at-bat.

“He’s no better, which is the main issue,” Hinch said. “We can’t play short (a roster spot). This IL placement is part symptoms, because he can’t turn his neck. … We needed to make an aggressive move, but he can’t function. That’s the main issues.”