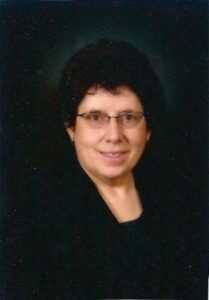 Julie Lynn Mathews, of Traverse City, formerly of Clarkston and Kent City, passed away on Sunday, March 6, 2022, at Faith Hospice Trillium Woods in Byron Center, at the age of 63.
Julie was born on March 9, 1958, to James “Art” and Bettie (Anderson) Mathews in Grant.
She graduated from Kent City High School in 1976 and Western Michigan University in 1980 with a Bachelor of Music in Instrumental Music Education.
Julie had a deep love for music. She went on to direct the junior high band at Clarkston Community Schools for 30 years before her retirement in 2010. Julie thoroughly enjoyed her retired life by playing the trombone for the Benzie Community Band, the Northwestern Michigan College Band, and the Benzie Area Symphony Orchestra as well as adjudicating competitions.
Julie is survived by her sisters, Sheree Robinson, of Bellaire and Brenda (Deland) Davis, of Battle Creek, her nieces and nephews Riley Kate, Cole and Grace Robinson, and Matt Davis, and Ellie (Caleb) Aldrich. She is also survived by her faithful pup and best companion Ziggy.
She was preceded in death by her father James “Art” Mathews, mother Bettie Mathews, and brother-in-law Brock Robinson.
Visitation with the family was held on March 12 at North Ridge Funeral Home, Sparta. Funeral and committal services were held March 13 at the funeral home.
A luncheon was held immediately following the service at the Kent City American Legion.
In lieu of flowers, the family requests expressions of sympathy be made to the “Julie Mathews Scholarship Fund” with the Clarkston Community Schools Instrumental Music Association. Monies donated will be used towards band camp scholarships. Envelopes are available at the funeral home, or may be sent directly to CSIMA, PO Box 1018, Clarkston, MI 48347.