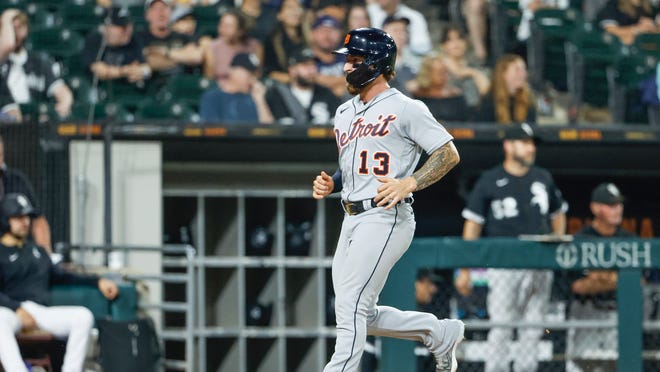 CHICAGO — Beau Brieske took a no-hitter into the sixth inning.

Javier Baez went yard in his return to Chicago.

And the Detroit Tigers won five games in a row, all against American League Central opponents. The Tigers opened their longest road trip since April 2003 — 12 games in 11 days — with a 2-1 victory over the Chicago White Sox at Guaranteed Rate Field.

“We’re one win away from six,” catcher Tucker Barnhart said, “and then hopefully we just keep piling them on.”

FEEL A DRAFT? Tigers’ pick at No. 12 in MLB draft forces balance of readiness, overall talent

Brieske, in his 14th MLB start, did not allow a hit until ex-Tiger Josh Harrison’s leadoff single in the sixth. Harrison, who turns 35 Friday, also drew Chicago’s lone walk against Brieske in the third inning.

The 24-year-old pitched into the seventh inning and completed 6⅓ innings with four strikeouts, allowing two hits and one walk. Brieske, a right-hander drafted in the 27th round in 2019, threw 62 of 93 pitches for strikes.

It was a brilliant performance and by far the best start of his big league career.

“Going a third time through, I didn’t want him to walk away with anything bad that happened,” Hinch said. “He gave up the hit, so I got him out of there. Excellent job of executing. He showed different looks. He had the two-seamer inside quite a bit. The right-on-right changeup was really good. Just an all -around good effort by Beau.”

Lange struck out Jimenez, then Barnhart picked a ball in the dirt, froze Abreu between first and second base with a fake pump and ran him down between the bases for the third out.

Left-hander Andrew Chafin and lefty closer Gregory Soto slammed the door on the White Sox in the eighth and ninth innings, respectively. Soto, pitching for the first time since July 4, notched his 17th save.

But not before Soto nearly gave away the game.

With one out, Soto allowed a single to Tim Anderson and walked AJ Pollock. Luis Robert followed with an RBI double down the first-base line. The ball got past diving first baseman Spencer Torkelson, scoring Anderson and putting runners on second and third. But Soto came back with a strikeout of Abreu on a foul tip, then got Jimenez to ground out to Báez.

“It popped over,” Torkelson said of Robert’s double. “It hit off the end cap (of the bat), so it had some funky spin on it and grabbed some dirt and popped over my glove. Not really much I could do.”

Before Abreu’s at-bat, pitching coach Chris Fetter emerged for a mound visit. Hinch wanted Soto to challenge Abreu, rather than pitching around him or intentionally walking him with first base open.

“Fat had a great visit,” Hinch said. “Javy was coming in. Everybody was telling him to be aggressive and stay in the zone. Getting Abreu was huge. I didn’t feel comfortable walking guys because of the erratic nature of maybe a base on balls that comes after the intentional walk. … He made pitches at the end.”

In the top of the ninth, pinch-hitter Eric Haase entered for a matchup with White Sox left-handed reliever Tanner Banks. He singled to center. Two outs later, Torkelson entered as a pinch-hitter.

The 22-year-old rookie, who entered hitting a measly .193 in 73 games this season, came off the bench and put Banks’ first-pitch changeup into left field for an RBI single, giving the Tigers a 2-0 lead.

“When you’re on the bench, you’re always staying locked into the game, thinking about the situations that may come up that you would go into the game and just preparing yourself mentally for that,” Torkelson said. “Going into the at-bat, I watched a couple videos of the pitches he’s thrown. I know what pitches he has. Just stick to my approach and get the job done.”

In the second inning, the Tigers had their first opportunity to score against White Sox right-hander Dylan Cease, who entered Thursday’s outing with a 10-0 record and 1.91 ERA in 11 career starts against Detroit.

Harold Castro started things off with a walk, and Jonathan Schoop hit a single. But the next three batters struck out — Jeimer Candelario, Kody Clemens and Barnhart — to strand the runners in scoring position.

Cease matched Brieske throughout his start, but a mistake in the fourth inning put the Tigers on the scoreboard. His slider ended up at the bottom edge of the strike zone, and Báez cranked the ball 383 feet for a solo home run and a 1-0 Tigers advantage.

Báez leads the Tigers with eight homers this season, one ahead of Eric Haase and two ahead of Schoop.

“We were pretty frustrated at first and third, no outs, and we didn’t score anybody,” Hinch said. “When you have a pitcher like Cease on the mound, there’s this sort of undertone that you have to be perfect and have to capitalize on any opportunity you get. … Javy coming back and getting us on the board was pretty awesome.”

Besides Báez’s homer, the Tigers were shut down by Cease.

He allowed one run on three hits and three walks with eight strikeouts in six innings, throwing 61 of 101 pitches for strikes. His nasty slider provided 11 of his 16 swings and misses, with four more whiffs coming from his 96 mph fastball.

“He’s nasty,” Barnhart said. “He’s leading the league in punchies per nine (strikeouts per nine innings) for a reason. With as good as Beau was tonight, he made it easy for us to grind out at-bats.”

The stretch included all four of Brieske’s strikeouts and seven of his nine swings and misses. The eighth batter, Harrison, reached safely with one out in the third inning when Brieske missed outside with a four-seam fastball in a 3-2 count.

Schoop, the best defensive second baseman in baseball, ended the third with a leaping catch to take a hit away from Tim Anderson. The ball, hit with a 104.2 mph exit velocity, had a .930 expected batting average.

“You got to make plays and not give them extra outs,” Hinch said. “It was good for us to play rather clean. … It’s a fundamental game, but in one-run games, you look back at that and those are really key.”

With one out in the sixth, after Harrison broke up the no-hit bid, Anderson grounded the ball to Báez at shortstop. The 2020 Gold Glove winner put the ball in the dirt, but Clemens — Thursday’s the starting first baseman and a natural second baseman — picked it to save him from a throwing error.

At first, the play was ruled an error.

But Hinch challenged and won for the second out.

“Kody was pretty emphatic,” Hinch said. “Right away, he pointed at the base that he had it. … I didn’t love that it took forever because those usually don’t go your way whenever you challenge and it takes a long time. But it was good all the way around.”

A wild pitch advanced Harrison to third base, but Brieske escaped by inducing a lineout from Pollock to end the sixth. He also got the first out in the seventh before Abreu’s single chased him.

He had 12 called strikes, as well.

“That was the difference maker tonight,” Brieske said. “I felt like I executed the sinker better than I had all year. I was able to throw it for strikes and throw the strike-to-ball that got in on guys’ hands so we could get some weak contact and quick outs. That what probably the best the sinker has been so far.”