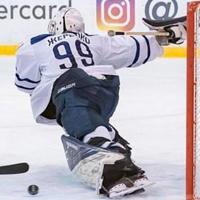 Please forgive Vadim Zherenko if his head is spinning faster than a goalie trying to keep track of a three-on-one rush.

In the past three months, he has gone from Russia to Georgia — the country, not the state. Then to Canada, St. Louis, Traverse City, Mich., and now back to St. Louis.

His hockey gear remains in Russia. There were no rinks to work on his game in Georgia. So he’s playing catchup, with the idea of ​​playing goalie this season with the Blues’ American Hockey League affiliate in Springfield, Mass.

“I think three days in the US,” Zherenko told the Post-Dispatch on Friday, when he was with the Blues’ squad at the NHL Prospect Tournament in Traverse City, Mich. “I fly three days ago from Canada, then I get USA visa. So very nice to be here.”

Not much was known about Zherenko when the Blues picked the Moscow native in the seventh round, no. 208 overall, in the 2019 draft. (Only nine players were taken after him.) And to a degree, that remained the case — even for the Blues’ organization.

During the height of the coronavirus pandemic in 2020 and early 2021, it was difficult for even Blues scouts to watch him play in person. Even today, general manager Doug Armstrong says: “I don’t know a lot about him.”

But since getting drafted, Zherenko’s numbers have been hard to ignore. Or as former Blues assistant general manager Bill Armstrong said a couple of years ago: “He’s got some crazy numbers over there. He’s a freak athletically.”

Playing in the Moscow Dynamo program, Zherenko appeared at both the VHL and MHL levels in Russia during the 2019-20 and 2020-21 seasons. The VHL is Russia’s second-highest level of hockey, just below the Kontinental Hockey League. The MHL, is Russia’s top level of junior hockey.

• This past season, there was a step up in competition. The Blues sent him to the Ilves team in Finland’s top pro league — the Liiga — in which he was playing against men 25, 30, 35 years old. He posted a 2.67 GAA and a .902 save percentage in 30 games. There, he was a teammate of Swedish defenseman Leo Loof, a Blues third-round pick in 2020 who’s still playing for Ilves this season.

And then last May 17, on the day the Blues opened their second-round playoff series against the Colorado Avalanche, the Blues signed Zherenko to a three-year, $2.54 million entry-level contract. The decision was made to bring him to America.

“We think he can help,” Doug Armstrong said. “We think he’s ready to play. Our goaltending coaches and our staff believe that he’s ready. He wanted to come to North America. It took quite a bit of time to get him over here.”

That’s for sure. Getting US visas can be complicated enough for Russian hockey players under normal circumstances, much more since Russia’s invasion of the Ukraine.

Zherenko, 21, couldn’t get a US visa in Russia. So he traveled to the neighboring country of Georgia to see if he could get a United States visa there. No luck. But after eight weeks in a Georgia hotel, he was able to get a Canadian visa.

So it was off to Canada. And once he was there, he was able to get a US visa. And here he is. Last Wednesday, when the Blues’ prospects team practiced at Centene Community Ice Center before leaving for Traverse City was Zherenko’s first day — and first time — in the United States. He hasn’t had time for any sightseeing so far; and says the food is a little different.

“I don’t see a lot of places,” Zherenko said. “Like go to fly and fly here. So I think it’s nice country.”

Zherenko spoke to the Post-Dispatch outside the Blues’ locker room Friday in Traverse City. His English wasn’t bad, but prospects teammate Nikita Alexandrov — who was born in Germany but is of Russian descent — was there to help with any language barriers.

“His first day (in the US) was like really special for him,” Alexandrov said. “He didn’t get to go home before he came to Canada, so he left all his gear — all his stuff back home.

“The goalie coach in St. Louis (David Alexander) helped him out with everything. They went to a suit store, got him suits, everything.”

Alexandrov also was part of the same 2019 draft class, getting taken in the second round. But Zherenko’s play is very much a mystery to him as well.

“Honestly, I’ve never followed him or anything,” Alexandrov said. “But just seeing him in practice, he seems very good. I think he can earn himself a spot in the AHL, or even make an impression like in camp. So I hope he has a good camp and shows what he’s got. We’ll go from there.”

That’s pretty much how the Blues’ brass feels about him.

As to when, exactly, he’s ready for game action remains to be seen. Remember, he had no ice time in Georgia — just some gym work. Zherenko didn’t get into any of the team’s three prospects games in Traverse City. Perhaps he plays in one of the Blues’ eight preseason games after camp starts on Thursday.

But that’s no guarantee, either, considering the Blues will begin camp with six goalies.

“We’re excited,” Doug Armstrong said. “We think him and (Joel) Hofer could be a real good mix. He’ll certainly get a good look at our training camp on where he’s at.”

But it looks as if the Blues would like to have Zherenko backing up Hofer with the Springfield Thunderbirds this season. That could mean Colten Ellis, a third-round pick in that same 2019 draft, begins this season at Worcester of the ECHL.

A New Barbecue Place is Coming to Lansing