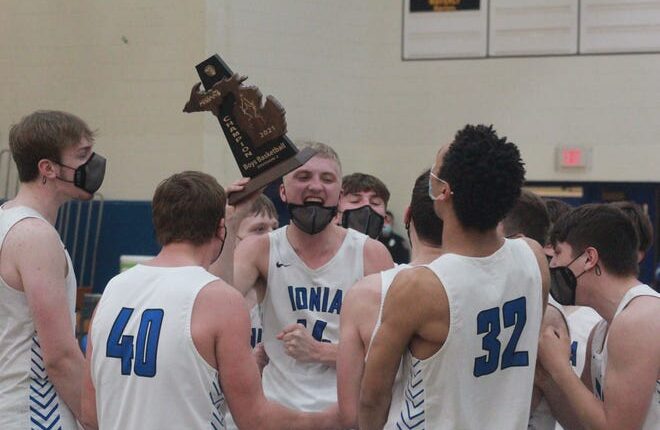 IONIA – The Ionia boys’ college basketball team has “come a long way” over the past calendar year as they waited for the opportunity to keep the district’s title streak alive.

After 32 minutes of play on Saturday afternoon, the Bulldogs picked up the hardware again.

The Bulldogs (10-7) play at Williamston High School. Ionia will face Williamston or Chelsea in the regional semi-finals on Tuesday March 30th at 7pm.

Ionia head coach Scott Swinehart said this season has been “a long road” for his team. But when the clock hit zero on Saturday, Swinehart was proud of what the Bulldogs had achieved.

“I just told the guys in the group, before we took our medals and trophy, that it’s been a long way since last March,” said Swinehart. This season has been tougher than I thought – so many games to play, not many exercises. It was just a difficult task.

“I give them credit. All of our boys have come to the gym every day and been working, trying to get better, and in order for them to be district champions I’m just happy for them. “

The win on Saturday was the third consecutive title for the Bulldogs. Ionia won in 2018 and 2019 and should play in the district title last season before the COVID-19 pandemic forced the cancellation of the remainder of the MHSAA tournament.

Ionia’s senior forward Logan Schafer scored the opening five points of Saturday’s game as the Bulldogs took a 9-4 lead in the first quarter. Ionia was leading 11: 7 after the first eight minutes.

The Bulldogs led 28-20 with 1:28 in the first half when the Big Reds got buckets from Junior Guard Ronald Turnley and Sophomore Guard Da’quarious Alexander. Turnley scored a free throw 1.8 seconds ahead to cut Ionia’s lead to three (28-25) at halftime.

“Your pressure caused us some problems,” Swinehart said of Sexton’s defense.

Ionia turned a three-point lead into an eight-point lead in the first minute of the third quarter when senior guard Kyle Griffith scored a pass from Schafer and took the lead of 33-25 Bulldogs with a 3-pointer.

“It feels great,” said Griffith. “It’s always great to build a lead in the third quarter. Coach Swinehart always says that it is the most important time in the game. ”

Ionia led 42-34 after the third quarter. Sexton didn’t go away quietly and cut Ionia’s lead to two in the fourth quarter after a 3-pointer from Turnley (45:43).

The Bulldogs then scored the next five points. Tooker scored a pass from Griffith. After a personal and technical foul on Sexton, Ionia’s senior guard Tyler Walczak scored two free throws, and Tooker later made one of two free throws to put Ionia 50-43 ahead.

Tooker scored eight of Ionia’s last nine points – all with free throws. He led the Bulldogs with 19 points. Tooker said he works on his free throws at practice every day and said they were free for a reason.

“We made some free throws in the end and made them important,” said Tooker.

All 15 players on Ionia’s squad recorded the playing time on Saturday.

“I’m happiest for the guys who were on the team a year ago and didn’t have a chance to land,” said Swinehart. “Our seniors did a great job all year long and focused on the next task.”

Ionia overtook Lansing Catholic 61-60 in the district semi-finals on Thursday to qualify for the championship.

The Bulldogs defeated Sexton in their first two games of the season: 59-27 on February 26 at Ionia High School and 67-43 on March 6 at Lansing. The latter marked Swinehart’s 300th victory as head coach. Sexton finished his season 3-13.

“We just had to keep our composure and stay calm,” said Tooker. “(Sexton’s) will speed you up sometimes … I felt like we were very good with their press towards the end of the game.”

Swinehart said his team is planning a shootaround Sunday and a Monday for Tuesday’s game. Tooker is looking forward to the challenge.

“It’s been an interesting year and I think we’re closer than ever,” he said. “I’m ready for the region and I think everyone else is too. I think it will be great. ”