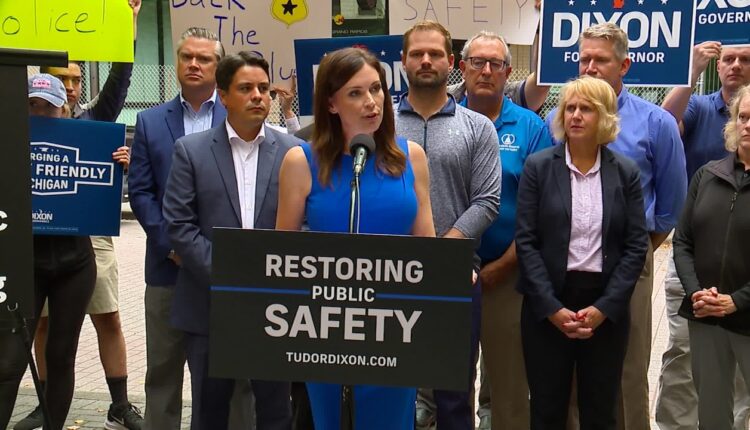 GRAND RAPIDS, Mich. (WOOD) — The race for Michigan governor is picking up steam, with the Democratic incumbent and Republican challenger visiting Grand Rapids on back-to-back days for campaign events.

gov. Gretchen Whitmer, the Democrat, was in town Monday to accept the nomination of some Republicans, including a former part official and former congressman. On Tuesday, Republican Tudor Dixon and running mate, former state Rep. Shane Hernandez of Port Huron, held the first of what are expected to be several policy briefings from their campaign.

The focus Tuesday was police and public safety. Dixon said Whitmer has not made public safety a top priority and has not given police officers the support they needed during difficult times, particularly over the past two years. She also said violent crime has risen in the last four years and more police officers are needed.

In addition to pleading to make public safety one of her priorities, Dixon laid out a plan to spend a billion new dollars on policing across the state over four years.

“Michigan families support our public safety officials,” Dixon said. “Michigan voters believe we need to fund the police, not defund the police. On Nov. 8, I’m confident Michigan voters will reject those like Gretchen Whitmer who have either ignored or enabled this problem, turned their backs on the men and women who everyday have had our backs and send a clear message that we need more police and fewer violent crimes.”

The plan, according to Dixon, would spend $700 million on recruiting and retaining officers, $250 million on equipment and training, and $50 million on finding and prosecuting what she says is a backlog of violent offenders.

Ask how, if elected, the Dixon-Hernandez team would pay for the billion-dollar investment, Hernandez, a former state House appropriations chair, said that there is nearly $3 billion unspent in the general fund that could be used for the plan.

Detroit police officer dies of complications 24 years after being shot