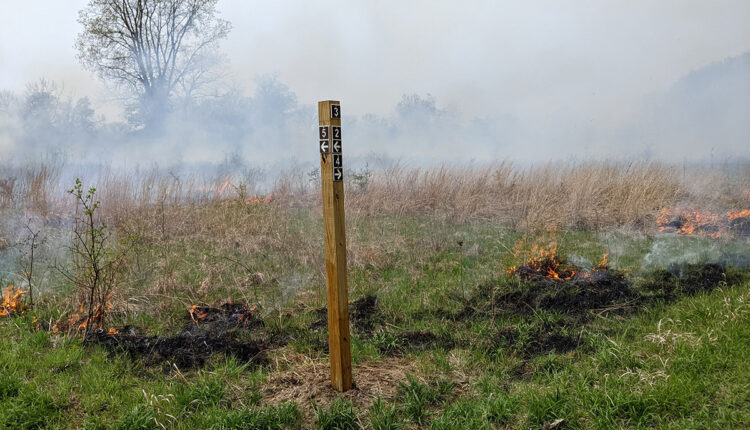 How smoking grass is preserving habitat in Rouge Park

On a hot, sunny day this week, five acres of Detroit’s Rouge Park were set on fire.

The “prescribed burn” was intentional and is part of a series of planned burns for the park to help restore the original tallgrass prairie habitat. Formerly common throughout the United States, prairies are growing increasingly rare.

In Michigan alone, just 0.1% of prairies remain, said Sally Petrella, president of the Friends of Rouge Park, a nonprofit that protects and promotes a natural, healthy, and culturally vibrant Rouge Park.

Petrella said the community is lucky to have a 65-acre tall grass prairie in Detroit.

“It’s the largest and most accessible prairie in all of southeast Michigan, right there in Detroit’s Rouge Park,” she told BridgeDetroit.

The controlled burn was the second for the Rouge Park prairie in the past decade. Another might happen in the fall or next spring, Petrella noted.

Prairies are best maintained by fire, a practice historically used by Indigenous people to manage prairies, she said. Prescribed burns limit the growth of invasive species, help with pest management, and some species even require fire to reproduce and grow.

Among those are the jack pine tree and Kirtland’s warbler, said Antonio Cosme, an education coordinator with the National Wildlife Federation and organizer with Black to the Land Coalition.

The Kirtland’s warbler only lays eggs in young jack pine trees and was nearly extinct by the early 1970s. Jack pines need fire to reproduce, but fire suppression policies over the last hundred years have stifled growth of the trees. By reintroducing fire through prescribed burns, jack pines have made a comeback, and so have the Kirtland’s warbler, also referred to as Michigan’s Bird of Fire, which was on the U.S. Fish and Wildlife Service’s endangered species list from 1967 to 2019.

“Humans have been using fire to shape landscapes and ecosystems for tens of thousands of years,” Cosme said.

Indigenous fire practices were mostly destroyed when white Europeans colonized the Americas and enforced principles of western conservation, Cosme said. Many people, he said, have the notion that Indigenous people just existed in the wild, without altering their landscape. That understanding, Cosme said, is “very inaccurate.”

In reality, Indigenous people have long used burning as an invaluable tool in the management of forests. In addition to controlling invasive species, burning cycles nutrients and supports growth, which benefits future foraging and hunting. In Rouge Park specifically, the burns will activate the native seeds in the forest and limit invasive wood species and European grasses that threaten the tallgrass prairie.

The Friends of Rouge Park are engaging Indigenous people in different projects at Rouge Park, including the sugarbush, a collection of maple trees that are tapped for sugar or syrup.

The nonprofit and Cosme are collaborating on a project to connect youth with the Indigenous tradition of tapping maple trees for sugar and syrup.

“There’s just so many benefits that come from employing indigenous ecological knowledge and ancient practices, like fire management,” Cosme said. “It’s essential that we bring these practices back.”

The burns are being led by Huron-Clinton Metroparks and Friends of Rouge Park, in partnership with the City of Detroit. The burning itself is being led by David Borneman, an ecological restoration contractor that specializes in prescribed burns. For 30 years, Borneman has done controlled burns for the City of Ann Arbor. Partnerships are key to this kind of project, Petrella stressed.

Jeff Klein, deputy chief of landscape architecture for the City of Detroit’s General Services Department, said the relationship between prescribed burns and the city’s park management system is “evolving.” On Wednesday, he attended the burn.

“I was out there to learn about it so that we can continue to develop what our goals are for this,” he said, “where it actually fits in an urban park system, and how we can better implement it.”

Klein said he’s an advocate for continuing to explore prescribed burns as a management tool. One benefit is the reduced need for lawn mowing, which in turn reduces the use of fossil fuels, he added.

Friends of Rouge Park originally started the initiative to restore the prairie more than two decades ago, as a way to improve water quality. Native prairie plants have deep root systems up to 15 feet long that absorb stormwater and keep it out of the system, Petrella said.

Petrella encourages people to check out the 1.25-mile walking path through the prairie at Rouge Park that her group and other partners have worked to develop over the years.

“One of the most amazing things to do is to go take that trail,” Petrella said. “You feel like you’re miles away from any city, in the midst of this beautiful natural area. You’ll see all kinds of birds, butterflies, and really interesting plants. It’s just a great way to connect with nature.”

authored by
First published at https%3A%2F%2Fwww.bridgedetroit.com%2Facres-of-rouge-park-in-detroit-set-on-fire-to-preserve-prairie%2F

Champion of all things Mayfield gets her day | News