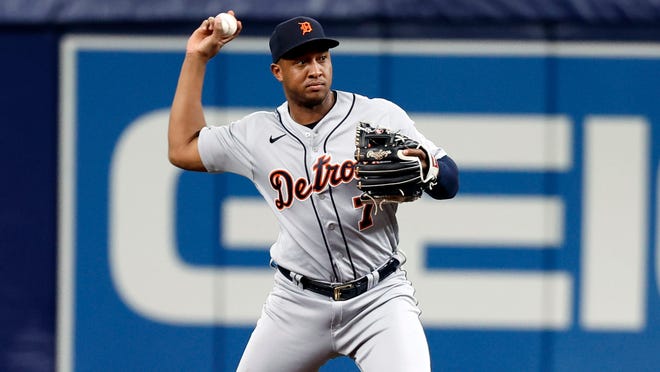 ST. PETERSBURG, Fla. — Detroit Tigers right-hander Alex Faedo took the mound Monday for his return to Tropicana Field, about 20 miles from his hometown of Tampa and 150 miles from the University of Florida.

It was a homecoming start.

Faedo spent most of his life in Florida, and he attended many Tampa Bay Rays games as a kid. This time, the 26-year-old rookie entered the ballpark — matched up against 12-year MLB veteran Corey Kluber — and allowed just one run while pitching into the sixth inning.

The Tigers beat the Rays, 3-2, in the first of three matchups in the series to begin a nine-game road trip, extending their winning streak to four games and improving to 13-23 this season.

Faedo, in the third start of his career, did enough to put the Tigers in a position to win. Utility player Harold Castro, operating as the first baseman, made sure the team didn’t waste Faedo’s effort.

In the top of the ninth, Castro crushed a go-ahead solo home run to right field off Rays reliever Andrew Kittredge, breaking a 2-2 tie. He smashed a second-pitch fastball in an 0-1 count and sent the ball 400 feet with a 103.8 mph exit velocity.

Castro admired his home run and flipped his bat.

It was Castro’s first homer this season and the ninth of his five-year MLB career.

The other big hit for the Tigers was courtesy of Jonathan Schoop in the fourth inning. He swatted a two-run home run off Kluber’s sinker. Miguel Cabrera, who scored on the long ball, led off the inning with a single.

The second home run from Schoop in three games put the Tigers ahead 2-0. Schoop turned on Kluber’s second pitch of the plate appearance, sending the ball 404 feet with a 105.5 mph exit velocity.

Faedo tossed 56 of 83 pitches for strikes.

The Rays had a runner on first base and two outs in the sixth.

Chafin needed one pitch — an 80 mph slider — to induce an inning-ending groundout. He returned for the seventh, allowing a leadoff single to Vidal Bruján before Kevin Kiermaier grounded into a force out.

Righty Alex Lange joined the action to face Mike Zunino, a right-handed slugger, with a runner on first and one out in the seventh.

His first pitch to Zunino, a 95.8 mph sinker, resulted in an inning-ending double play, as Schoop fielded the ball on the run, stepped on second base and completed an off-balance throw to Castro.

Righty Michael Fulmer squandered the 2-1 lead in the eighth on Wander Franco’s sacrifice fly, but left-hander Gregory Soto shut down the Rays, despite a two-out single, for his sixth save.

The lone blemish from Faedo came in the sixth inning, when Brett Phillips hit a home run off the catwalk at Tropicana Field. The Tigers challenged the call on the field but were unsuccessful.

Phillips, a lefty hitter, turned on Faedo’s 91.3 mph fastball in a 2-1 count. The homer trimmed the Tigers’ advantage to one run. Faedo retired the next two batters — Yandy Diaz and Franco — but a single from Randy Arozarena forced his exit with two outs.

The Tigers’ defense aided Faedo in the second inning.

Choi opened the frame by ambushing Faedo’s first pitch for a double. Three pitches later, Bruján hit a grounder to Schoop at second base. Choi attempted to advance to third base on the play, but Schoop fired the ball to Candelario for the force out. Then, Bruján was caught stealing for the second out, from catcher Tucker Barnhart to shortstop Javier Báez.

Against Kiermaier, Faedo tossed back-to-back changeups for his fourth and fifth pitches of the battle. Doubling up resulted in Kiermaier’s flyout to center field, ending the second inning.

He needed 28 pitches in the third inning, despite striking out the first two batters. Franco, the Rays’ most dangerous hitter, stepped to the plate with runners on first and second base and two outs.

Franco lined out on a 3-2 changeup.

In three starts, Faedo has a 2.87 ERA with four walks and 12 strikeouts in 15⅔ innings.

He recorded 14 swings and misses: three fastballs, eight sliders and three changeups. He posted just nine called strikes, one each with his slider and changeup.

Another record high for gasoline | the BIZ