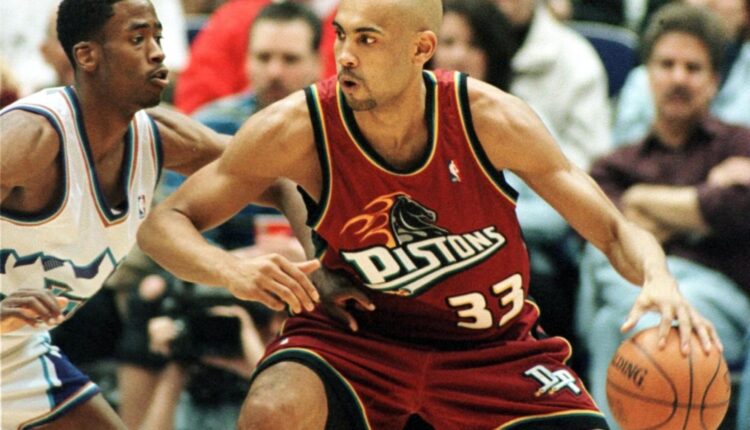 Grant Hill is one of the greatest players the Detroit Pistons have had in the past 25 years. He will be in the area on Saturday, June 11, promoting a book he has written on his life.

There is no question Grant Hill was a star player for the Pistons, but he seems to have never been embraced by the fans as much as ’80s icons like Isiah Thomas and Dennis Rodman or the 2004 title team members like Ben Wallace and Rip Hamilton.

It is no coincidence that Wallace and Hamilton, respectively, have been Detroit’s official representatives at the past two NBA Draft lotteries.

Maybe it’s because the Pistons were just OK when he played in the Motor City between 1994-2000. After experiencing all the success of the ‘Bad Boys’, just making the playoffs (and four times losing in the first round) did not quite cut it, although that would be a heck of a lot better than the Pistons have done lately.

And Hill wasn’t a lifer in Detroit. He played just six of his 18 seasons in the NBA with the Pistons. He went to Orlando as a free agent, but Detroit was able to wangle some compensation with a sign-and-trade (which included Magic backup center Ben Wallace, who did OK in Detroit).

Or maybe people just don’t like any player who wore those Teal uniforms.

However, Hill still has found memories of Detroit. Now the executive director for USA Basketball, Hill has written a book ‘Game’, about his life and he is going on a book tour.

Hill has certainly had an interesting life.

The son of Dallas Cowboys running back Calvin Hill, he went to Duke, and he was the one who threw the long outlet pass to Christian Laettner to beat Kentucky in the NCAA tournament.

An ankle injury suffered at the end of his time with the Pistons would hobble him for many years. Hill only played 18 games total for Orlando the first two years he was there.

Hill is a minority owner of the Atlanta Hawks and a long-time broadcaster. After the 2021 Olympics, he was named the new head of USA Basketball. It will be his job to put together the men’s and women’s Olympic teams in 2024 as well as set up the many national teams that compete in tournaments around the world on a yearly basis.

Hill did make the Naismith Basketball Hall of Fame, but we will never know what kind of player he could have been if not for the ankle injury, which robbed him of most of his prime years.

Still, despite the injuries, Hill did play until he was 40 years old, something many NBA stars with better health are unable to accomplish. In his final season, 2012-13 with the Los Angeles Clippers, he played with former Piston Chauncey Billups and future Piston Blake Griffin.

Grant Hill is probably the last legitimate superstar the Pistons have had (save one season of a healthy Griffin). If you are a fan of his, Saturday might be a good chance to see him.