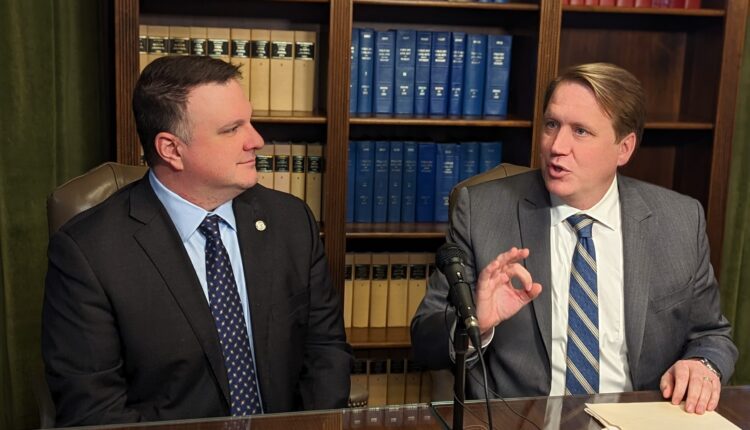 Final negotiations on a supplemental budget bill have been teed up, but there was no shortage of drama with the first big piece of legislation taken up by the new Democratic-led Legislature.

A new Democratic lawmaker, who also became a new dad Tuesday morning with the birth of his first child, was forced to drive two hours from the hospital to Lansing for a vote that day after House Republicans chose to unanimously oppose a largely procedural vote on the bill.

State Rep. Joey Andrews (D-St. Joseph) welcomed a baby girl early Tuesday morning. Without any House Republicans voting to send Senate Bill 7 back to the Senate, the chamber’s slim Democratic majority needed Andrews’ vote on the measure which will address some remaining funding issues the GOP-led Legislature failed to pass in last year’s lame duck session. The House went at ease for about four hours to await his arrival from the hospital.

I didn’t know partisan games would make me drive from the hospital to Lansing on the same day of my daughter’s birth to break a tie and stop the GOP from blocking a commonsense budget, but like I promised the voters who trusted me: I will be here when work needs to be done. pic.twitter.com/sIEcRh6Acu

“I didn’t know partisan games would make me drive from the hospital to Lansing on the same day of my daughter’s birth to break a tie and stop the GOP from blocking a commonsense budget, but like I promised the voters who trusted me: I will be here when work needs to be done,” Andrews tweeted.

Several Democrats also posted their criticism of Republicans for forcing Andrews to leave his baby.

What should’ve been a procedural vote turned into the GOP pressuring a new dad to drive 2+ hours to Lansing, mere hours after the birth of his first child.

Parents should be able to be with their newborn, legislators should be doing the work of the people. Enough with the games.

The state Senate voted along party lines last week to pass the supplemental bill with $1.5 million for the state’s independent redistricting commission, which was not funded in the Fiscal Year 2023 budget. The panel has filed suit against the Legislature.

The House then voted along party lines on Tuesday to zero-out, or remove all funding from SB 7 before sending it back to the Senate so that Gov. Gretchen Whitmer and legislative leaders can negotiate on what will go in the final bill.

The Senate on Wednesday did not concur on the bill, choosing instead to send it to a conference committee for the chambers to iron out differences in their versions. The conferees are Senate Appropriations Chair Sarah Anthony (D-Lansing), Sen. Sean McCann (D-Kalamazoo), Sen. Jon Bumstead (R-Newaygo), House Appropriations Chair Angela Witwer (D-Grand Ledge), Rep. Amos O’Neal (D-Saginaw) and Rep. Ken Borton (R-Gaylord).

Calling the bill a “secret Democrat spending plan,” Hall chastised the majority for taking hours to move the bill on Tuesday and not revealing its contents.

“I think what the people of Michigan want is they want transparency. We want to know, what are they proposing? Is this going to be some Democrat wish list of projects they’ve been waiting on for 12 or 40 years? We don’t know,” Hall said.

“We don’t know what they’re going to have in it and now it’s in conference committee,” Nesbitt said.

Two Republicans are part of the six-member conference committee that will negotiate the supplemental, but they are in the minority. That’s a position Republicans aren’t used to being in after 12 straight years of unified GOP control of the Legislature.

As for the vote that caused Andrews to leave his newborn daughter, Democrats say they had thought some Republicans would vote yes to advance the mostly procedural process, but Republicans refused to do so without knowing what would be in it — even though conference committees are often where final negotiations take place on budget issues.

All hands-on deck for road crews in Oakland County

Michigan lady, 93, hospitalized with life-threatening injuries after crash with semi