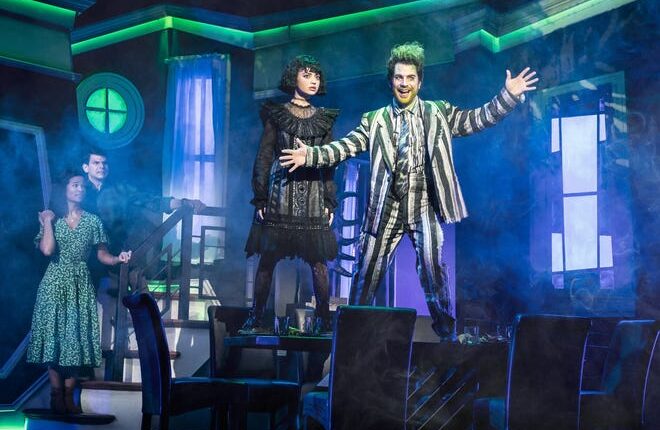 “Beetlejuice,” which closed on Broadway early this month and arrives at the Detroit Opera House Jan. 31, has been called “screamingly good fun,” by Variety and “exuberantly ghoulish” by the New York Times. Based on Tim Burton’s beloved 1988 film, the musical tells the story of Lydia Deetz, an unusual teenager whose life changes when she meets a recently deceased couple and Beetlejuice, “a demon with a thing for stripes.”

Among the show’s talented cast will be three actors – Britney Coleman, who grew up in Ann Arbor, Will Burton and Nevada Riley. All are graduates of the University of Michigan as well as veterans of a variety of musicals. Britney and Will play a married couple in the play but were roommates at UM. We caught up with the talented trio in Cleveland, the show’s first stop, to find out more about the upcoming show, life on the road and what they’ll be doing while they’re in the Motor City.

When did you graduate from UM? What shows did you perform in then?

Britney Coleman: I graduated in 2011. Probably the most notable (and surprisingly YouTube-viral) show I performed in was entirely student-written, directed, designed and produced: “A Very Potter Musical.” Some other favorite moments onstage were playing Sarah in “Ragtime” and Grusha in “The Caucasian Chalk Circle.”

Will Burton: I graduated in 2011. I played Jeff in “Brigadoon” my senior year. One of my favorite roles was Henry Ford in “Ragtime.” It’s a small role but it has one great song. I did a bunch of new musicals, including playing the title role in a show that my fellow classmates, Carlos Valdes and AJ Holmes, wrote called “Gibson Fleck.” I was also in “The Caucasian Chalk Circle” and “42nd Street!”

Nevada Riley: I graduated in 2019. At school, I was Charity in Sweet Charity and Serena in Legally Blonde my senior year. Other shows I was in were Me and My Girl, One Hit Wonder and Avenue Q.

What have you done since? Where do you live now?

Coleman: I’ve done lots of fun things since graduating U of M. A few fun Broadway shows, a couple of tours and lots of interesting regional theater across the country. NYC is home base at the moment.

Burton: I spent about four years after graduating doing a ton of regional theater…I got my big break when I was cast in “An American in Paris,” a new adaptation of the movie, directed and choreographed by Christopher Wheeldon. We played Paris for 2.5 months and then moved to Broadway. From there, I pretty much stayed in New York working on Broadway shows for the next six years. After that show, I did “Holiday Inn” at Studio 54, “Hello, Dolly!” (My first Broadway principal role, Ambrose Kemper, opposite Bette Midler), and then “Kiss Me, Kate!” back at Studio 54. Since then, I’ve done a few more regional gigs (Igor in “Young Frankenstein” was a favorite), and some new musicals, including the Off-Broadway run of “Between the Lines,” where I played a tap dancing dog! I’m currently based in New York, although I’ll be on tour with “Beetlejuice” for at least the next year.

Riley: I’m in NYC. Right after graduating, I was on the national tour of “Cats” up until the pandemic. I joined the Broadway production of “Beetlejuice” and made my Broadway debut with the reopening of the show in 2022 before joining the tour.

Favorite cities to visit when you tour? Why?

Coleman: San Diego for the weather and the food; Chicago because it’s my big city in the US; and Detroit, because it’s home!

Burton: This is my first tour! Our first stop was San Francisco, which I absolutely loved. Such a beautiful place with great food. Regionally I loved playing Chicago, another incredible food city. But I’m very much looking forward to playing Detroit, where I saw a lot of theater when I was in school, and to visiting Ann Arbor where I spent four wild and crazy years maturing into the man and artist I am today.

Riley: I loved going to Toronto when I was in “Cats!” I’m excited to perform in Detroit and be near campus!

Is this the first time you’ve performed in Detroit? Did you use to attend shows when you lived here?

Coleman: This is the first time I’ve performed at this level in Detroit. I grew up seeing tours go through the Detroit Opera House and the Fisher theater, which absolutely influenced my love for the theater. I’m excited to have so many friends and family in the audience while I’m here.

Burton: It is the first time I have performed in Detroit, although I did a ton of shows down the road in Ann Arbor. During school we would head into the city to see touring shows, so I’m so thrilled to actually be a part of one. And hopefully I’ll get a chance to see and chat with University of Michigan musical theater students currently in school.

Riley: Yes, this is the first time. I never actually attended any shows when I was at U of M, but it was always so exciting when alumni were performing there because they would visit campus and tell us all about the show/the business.

Tell me about your character in Beetlejuice. What do you like best/least about being in the show?

Coleman: Barbara and her husband Adam are the recently deceased couple haunting the house that Lydia and her father move into. These are the roles played by Geena Davis and Alec Baldwin in the movie. They’re total squares and total sweethearts who learn to grow out of their comfort zones with the help of Lydia and Beetlejuice. I love getting to play opposite Will every night and I love that this show is lighthearted and fun–it makes it easy to tour! The cast is one of the loveliest I’ve ever been able to work with. This type of shows fosters goofballs and being able to goof around with the cast every night might be the best part, but it’s also nice to be paid to travel.

Burton: Adam Maitland is a smart guy with an overactive imagination who has a heck of a hard time keeping his cool under pressure. He absolutely adores his strong, passionate wife, Barbara, and takes a lot of cues from her during the show. I absolutely love this show. I love the people I work with. I love the music and band. It’s outrageously funny, and I feel so incredibly grateful to participate in it every day. The thing I like least about the show is that more people can’t see it! It is such an incredible couple of hours in the theater, but there are only so many seats

Riley: I am in the ensemble, and I study Lydia and the Girl Scout. I’ve been doing the show now for almost a year and I really love it. The only thing I will be ready to leave behind is all the makeup we as the ensemble have to put on during the show. I love the song “The Whole “Being Dead” Thing, Part Two.” We are dressed as Beetlejuice clones. We get to be silly, and that’s one of the best parts.

What do you do/see when you come back to Michigan? What do you miss when you’re gone?

Coleman: I always make a trip to Zingerman’s Deli when I’m home and I always miss my family when I’m away.

Burton: Zingerman’s Deli in Ann Arbor is my only must stop. But I’ll also visit Ashley’s and Pizza House, and mosey around, take in the landscape. I don’t get back nearly as often as I would like, so I’m very excited to see it all again, and share it with some of my cast who have never been!

Riley: I try to eat at every single restaurant in Ann Arbor! I will be ordering feta bread from Pizza House immediately upon arrival. My dad is also a U of M graduate, so we also love going to games together.

What’s your favorite musical and why? Dream show to perform in?

Coleman: I can’t say that I have a favorite musical! There’s always something to love in every show that I see and perform in. A show that I’d love to be in that I haven’t yet is “Matilda.”

Burton: Honestly, Beetlejuice is pure musical comedy and it is exactly what I love to do. I’d love to do “The Producers” at some point. Every actor wants to do Sondheim, and one day I’d love to be in “Company.” I also love song and dance man roles, so I’d love to play Cosmo Brown in “Singin’ in the Rain.”

Riley: I honestly don’t have a favorite musical or a dream show… I just can’t pick one.

Burton: It can be a little more lewd than some expect, but audiences love this show… Justin Collette, who plays Beetlejuice, incorporates a lot of improv, so the show changes every night. It’s the perfect combination of outrageous, outlandish comedy and a really poignant story. Be prepared for a wild ride.

Riley: There are surprises around every corner.

Coleman: The show is definitely not suitable for young children… Beetlejuice actually asks if there are kids in the audience at one point. That said, there is a lot of heart in the show and it’s a really lovely family show for most middle schoolers and teenagers. Even fans who know the movie should be prepared to be surprised. It’s light-hearted; it’s a laugh a minute. That’s something we all need right now.

Last question: What do you order at Zingerman’s?

Burton: The Reuben with half sour pickle and a brownie. Zingerman’s is heaven!

Riley: The vegetarian sandwich that’s like a fancy grilled cheese. Pickles, chips, and of course lots of baked goods!