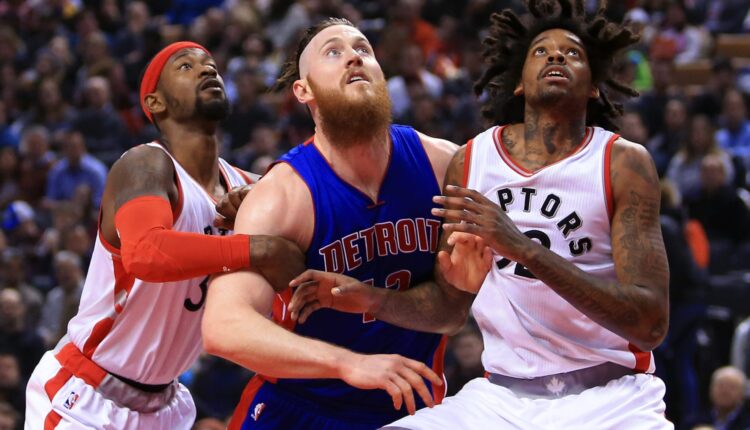 Fans of the Detroit Pistons have their favorite players, and they aren’t always the stars.

The Motor City appreciates toughness and hard work, whether it is Isiah Thomas, Cade Cunningham or role players like Jason Maxiell and Tayshaun Prince.

One such player was Aron Baynes, the big Australian center, who was a fan favorite for the two seasons he played for the Detroit Pistons even though he never averaged more than 6.3 points per game.

Baynes was a bruiser who loved to mix it up, so even though he certainly wasn’t an all-time great Piston, he was a guy a lot of us were sad to see go.

Now we are hoping to see him come back to the NBA, as the Australian suffered a horrific injury at the Olympics that not only threatened his career in the NBA, but put his life and ability to walk in jeopardy.

Aron Baynes’ injury is one of the weirdest in the history of basketball, as no one really knows how it happened.

The big center ran off to use the bathroom during Australia’s Olympic matchup against Italy and Bayne’s disappeared for a long time, causing concern amongst trainers.

He was found in a pool of his own blood after apparently taking a nasty fall and found himself paralyzed, unable to use his legs and one of his arms.

The injury was as scary as it was baffling and Baynes had to spend months in the hospital learning how to walk again. His NBA career was probably a distant worry compared to his ability to walk, but now it looks like Baynes may make an unlikely and miraculous comeback:

A year after a freak fall at the Olympics left him unable to walk and in hospitals for months, veteran NBA center Aron Baynes has recovered and will work out for NBA teams tomorrow in Las Vegas: https://t.co/spysXU1yLl

Baynes is in Las Vegas to work out for NBA teams during Summer League, hoping to go from not being able to feel his legs to back patrolling the paint in the NBA.

We wish the big man well in his comeback and hope he ends up back in an NBA locker room soon.

Election board nominee Yoder dedicated to course of, would not abstain from votes