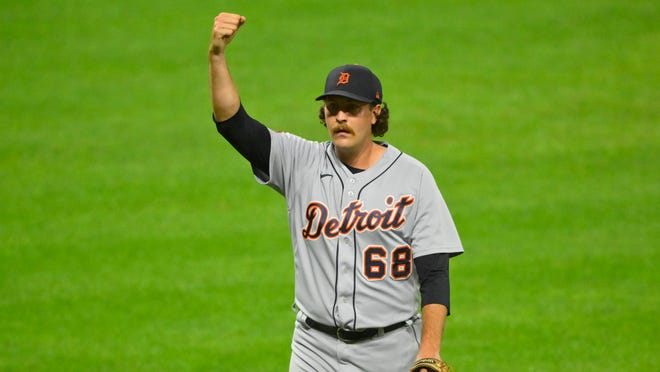 CLEVELAND — An overturned call in the first inning, thanks to a wise challenge from manager AJ Hinch, changed the outcome of Tuesday’s game between the Detroit Tigers and Cleveland Guardians.

The skipper’s knowledge of the rulebook was tested on a crucial play at the plate. Umpire Lance Barksdale determined Javier Báez was tagged out by Guardians catcher Austin Hedges for the third out in the first inning.

“It’s a tough rule,” Hinch said. “I see why their side would be frustrated because that’s not really the play that the rule is designed for, but when he’s in front of the plate, we were going to have them take a look in New York, and we got the call. “

What Hinch recognized (and Barksdale missed) on the play at the plate was the home-plate collision rule, which states a catcher must provide a runner with a lane to the plate before receiving the ball.

But Hedges’ foot blocked Báez’s path to the plate.

“It’s so hard,” said Tigers catcher Tucker Barnhart. “I feel for Austin. There’s so much gray area in how that play is call. It just put an extra onus on how that’s going to be looked at the rest of the year and moving forward. It’s a hard play because you have to be so aware of where you’re standing. That’s where the umpires are looking.”

The call on the field was overturned, and the Tigers ended up scoring three runs off right-hander Zach Plesac in the first inning en route to a 4-3 victory over the Guardians in the third of four games in the series at Progressive Field.

“I’ll get him in there again tomorrow,” Hinch said, “and continue to give him an opportunity to get hot like he is.”

Carpenter stepped to the plate after the Tigers took a 1-0 lead on the replay review.

The 24-year-old hammered a seventh-pitch elevated fastball to right-center field for a two-run homer, his second long ball in as many games. The Tigers controlled a 3-0 advantage after the first inning.

He finished 2-for-3 with two RBIs, two walks and one strikeout in Tuesday’s win. Harold Castro went 3-for-5 with two RBIs, while Baddoo produced two hits on his 24th birthday.

“It’s just getting my timing back,” Carpenter said. “It was just off the first couple days for some reason. It gives me the ability to swing at pitches I want to swing at and adjust to pitches. So when I’m right, it feels really good, and it felt really good again tonight.”

[ Beau Brieske hopes to return in 2022 despite ‘frustrating’ setback ]

The Guardians, trailing 4-1, capitalized on a mistake in the seventh, but before they could add more than one run, the throw-and-tag efforts from the catcher-shortstop combination of Barnhart and Báez silenced the home team.

Tyler Freeman, the leadoff hitter that inning, reached safely and advanced to second base on a missed catcher error by Castro at first base. Freeman then reached third on a deep flyout and scored on Myles Straw’s groundout.

That cut Cleveland’s deficit to 4-2.

Steven Kwan, facing right-handed reliever Jason Foley, brought the game-tying run to the plate with a two-out single. He tried to steal second base on a second-pitch sinker to Amed Rosario, but Barnhart threw a bullet to Báez, who applied a quick no-look tag for the third out.

The Guardians lost their challenge.

“That top of their lineup can leave the yard at any point,” Barnhart said. “You don’t necessarily anticipate them trying to run there, especially with Rosario at the plate and Jose Ramirez behind him. However, he did, and Javy made a great tag.”

In the eighth, the Tigers found themselves in trouble again.

Rosario cranked a leadoff triple off right-hander Joe Jiménez, and Jose Ramirez followed with an RBI single to trim the Tigers’ lead to 4-3. Jiménez retired the next two batters but had to face pinch-hitter Josh Naylor, a left-handed hitter with 15 home runs this season. Naylor grounded out to end the inning.

“That’s Joe,” Barnhart said. “That’s how he’s been all year for us. He’s been nails. I would take his heater against anybody, and that showed tonight.”

Once again, this time in the ninth inning, the Tigers were on the brink of destruction. Left-handed closer Gregory Soto gave up a leadoff double to Freeman, and Austin Hedges advanced him to third base with a sacrifice bunt.

But Soto struck out Straw.

Straw swung on a sixth-pitch slider below the strike zone. Initially, Barksdale appeared to think the ball was fouled and hit the dirt, but Barnhart handed him the ball — which showed no signs of contact with the ground — and Straw was ruled out after a meeting between all four umpires in the middle of the infield .

Guardians manager Terry Francona was ejected for arguing the call.

“Those are hard,” Hinch said. “One of us is probably getting tossed there. They’re looking at it from 100-plus feet away on the corners. It’s not reviewable. We saw on the replay that he caught it, but we couldn’t have gone to replay. … I think the call was right, but I totally understand Tito defending that call. Obviously, I would have been just as angry the other way. As big as that at-bat was in this game, it was worthy of emotion. “

Then, Kwan grounded out for Soto’s 22nd save this season.

King of the Hill

Right-hander Garrett Hill backed his offense with a quality start, allowing one run on four hits and two walks with three strikeouts across six innings. The 26-year-old has given up three earned runs over his past three starts, spanning 16⅔ innings.

“Once he gets in sync, he’s pretty tough,” Hinch said.

The Guardians scored their lone run against Hill in the first inning, a product of back-to-back singles from Kwan and Rosario. Ramirez grounded into a force out, which drove in Kwan from first base to make it 3-1.

Hill had runners on the corners and one out in the first inning, but he worked out of the jam without further damage. He threw 26 pitches in the first and bounced back with a clean, 11-pitch second inning.

“There’s a lot of contact and a lot of danger, and he was able to control the inning,” Hinch said. “The biggest at-bat of the inning was probably Jose Ramirez, first and third. You end up with just one run, get an out and have a runner on first, he was able to settle in, use his pitches and finish strong. “

After the first, the Guardians did not advance a runner to second base until Foley replaced Hill for the seventh inning. Hill worked around a single in the third, a walk in the fourth and a walk in the fifth.

“He does a really good job of filling up the zone,” Barnhart said. “His two-seam fastball is developing at a quick rate, and it’s allowing him to run the fastball in on the rights. His four-seam plays up in the zone, so that helps. … We really put an emphasis on making sure that we’re not chasing the strikeouts. I think that’s across the board with our guys against a (contact) team like this.”