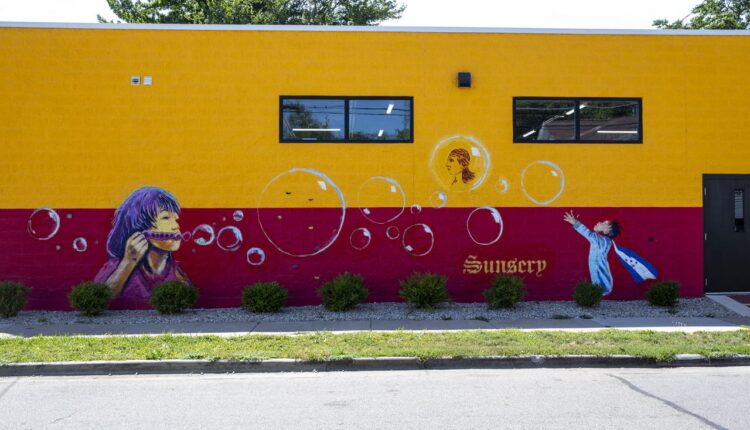 GRAND RAPIDS, MI – Inspired by the underrepresented Latino/Latinx community, Grand Rapids artist and photographer Hugo Claudin says he signed on as a muralist for an anti-racism project to bring his community and culture together.

The Diatribe, a Grand Rapids-based arts and culture nonprofit, launched the 49507 Project “as an artist and youth-led community that commissions seven local Black and Brown artists for large scale murals in majority Black and Brown neighborhoods” in the 49507 Zip code .

Besides bringing works of art to neighborhoods, students and local artists who participate in the project get to raise awareness and have discussions about issues such as redlining and poor funding that disproportionately affect minorities.

The Diatribe assigned Claudin the Aleman Auto Repair LLC building, located at 1801 Division Ave. S, after he attended a series of listening sessions with community stakeholders to help shape the mural.

The mural, titled “Play with Me,” depicts a 3-year-old Black child named Sincere catching bubbles from a Latinx woman while the flag of Honduras floats on his back. Lempira, an Indigenous figure of resistance from Honduras, can be seen floating in one of those bubbles.

“You’ll be a part of the design as you encounter it,” Claudin said. “I’m hopeful that a child will be coming home from school or wherever and see this mural here and climb. And then hopefully, mom or dad would be around to snap a picture.”

Claudin, who immigrated to Grand Rapids from Guadalajara in 1980, said he wanted to make the artwork a tribute to Catalino Aleman, the owner of the Auto Repair Shop, and the surrounding neighborhood. He also wanted it to be an interactive piece by adding rock climbing grippers inside one of the floating bubbles.

Along the bottom of the mural is the name of an Italian immigrant, Sunseri, who donated land to a neighborhood in San Pedro Sula, Honduras.

That same neighborhood is home to Aleman.

The new mural is his first large piece, Claudin said. Because of that, he made it a priority to do his research and listen to the kids and residents in the 49507 Zip code.

In his original piece, Caludin wanted to create a mural surrounding the killing of Black motorist, Patrick Lyoya, by a former Grand Rapids police officer, following a traffic stop on April 4. He said the community was looking forward to a more positive message.

“At the listening sessions, there was a person there that didn’t want to see more violence portrayed in the neighborhood,” Claudin said.

After consulting with other artists on what to do next, Claudin decided to go another route than what he originally planned.

“I am hoping that this represents a more playful image, that it represents the children that live in this neighborhood,” Claudin said. “I want to pay tribute to those children, engage with them and let them know they belong here.”

The official activation of the mural, along with a neighborhood block party, is scheduled for Sept. 2.

For more information about the anti-racism art project throughout the Garfield Park neighborhood, visit The Diatribe’s website here.