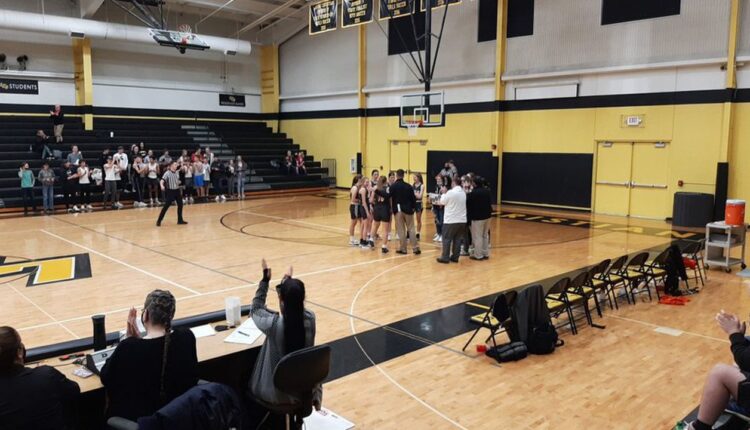 LANSING — In the third quarter of Thursday’s GLAC girls basketball game at Lansing Christian, Leslie senior Emma Smieska scored her 1,000th point while cutting down the lane and getting a pass from Reece DeRose.

Those were just two of their six third-quarter points as the Blackhawks turned a one-point halftime lead into a 10-point lead after three, which turned into a 49-37 win.

During that run Emma Smieska also had a steal and an emphatic blocked shot, Lily Smieska grabbed a steal and Dana Coltrain grabbed another.

Leslie’s defense was also able to limit Pilgrim senior Mia Judd, an all-state player a year ago who entered Thursday averaging more than 18 points per game. Against Leslie’s defense, she scored four.

“Sometimes I think the kids were always searching for her,” Leslie coach Justin Houghton said. “Kudos to Lansing Christian, a lot of those off-ball players took advantage of the fact we weren’t in a good position.”

With Judd limited on offense (though still coming away with three steals on defense), the Pilgrims turned to sophomore Grace Sullivan making her first start. She knocked down a corner 3-pointer early in the second quarter to briefly give Lansing Christian a 14-13 lead, and finished with 13 points.

“This was her first start and I think that helped her coming right out of the gate with some energy,” Lansing Christian coach Jason Salsbury said. “She can shoot and she gets her feet ready because she knows she’ll have a lot of attackers, so there’s some kick-outs to her, so she does a good job, and she was attacking, shooting off the dribble, which was a really good job for her.”

Leslie (9-1, 5-0 GLAC) jumped out to a 7-0 lead just 85 seconds into the game as Lily Smieska fed Alayna Brown for a basket, Coltrain fed Rylie Burley for another, and Emma Smieska hit a free throw, missed the second but grabbed the offensive rebound and knocked down the putback.

Lansing Christian (5-4, 2-3 GLAC) tied the game on a layup from Judd with 1:52 left in the first, then fought through a back-and-forth second quarter.

“We were playing better help defense,” Salsbury said. “We knew they liked to attack, they run a lot of screens. So we just did a little better job of communicating and taking away some of their cuts.”

After the Pilgrims took their first lead, Emma Smieska hit a putback to put Leslie back in front. After Sullivan hit a pair of free throws to make it 16-15, Coltrain answered with a 3-pointer. A layup from DeRose made it a four-point game, but Lansing Christian soon tied it with a 3-pointer from Ashlyn Kephart off an Audra Usiak assist.

DeRose had nine points for Leslie. Lily Smieska added eight. Coupled with the four points from Burley, that is 21 points from the Blackhawks’ freshman class.

“Maybe I expect more out of the freshmen than I really should, but what they have to learn is we’re going to get everybody’s best shot,” Houghton said. “Sometimes these freshmen have to take a deep breath, relax. Then once we slow things down on the offensive end, that really opened things up for us.”

How omicron is impacting workers ⋆