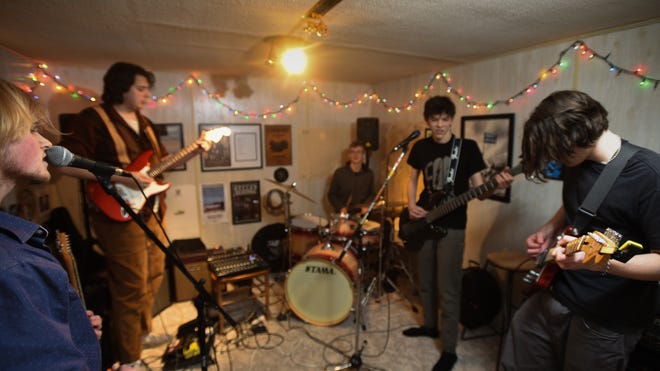 EAST LANSING – At first it might not seem impressive that the band Cross Eyed Strangers has played the East Lansing Art Festival and its new album has been streamed over 3,000 times on Spotify.

“Not very many people our age are doing what we’re doing,” Millhouse said. “So it’s pretty special and I know people are starting to take more notice, but I’ve been doing this my whole life.”

Cross Eyed Strangers formed in 2019, and since then has released three albums, multiple singles and gone through different lineups as some members have graduated and moved.

As of Thursday night the new album had been streamed more than 3,400 times on Spotify after less than a month and the band had 216 listeners on the streaming service, Millhouse said.

“The genres are kind of all over the board, but it all feels like Cross Eyed Strangers,” Millhouse said.

Cross Eyed Strangers has played festivals, including Pumpstock Music Festival and East Lansing’s summer concert series, and at venues like Mac’s Bar in Lansing before it closed and the Blind Pig in Ann Arbor, where the band will perform Feb. 26.

The high schoolers were pretty happy to play an East Lansing festival, period, and when they found out they could get paid $500 or more to perform it was, “whoa,” Millhouse said.

It’s really cool to get up on stage and get paid to have fun, Langford said. Morrison added that it feels like people really appreciate what they’re doing.

The band practices in the Millhouse family’s East Lansing basement, where Millhouse has a computer set up for editing music. Various band posters hang on the walls, including The Beatles, Bob Dylan and several of Jack White, Millhouse’s biggest musical inspiration growing up.

The teens said what sets Cross Eyed Strangers apart from other high school bands is the amount of work they put into their music. Leading up to a performance they rehearse every night and Millhouse has been working on “Mr. Conman” for more than a year, he said.

While the rehearsals leading up to shows can be really stressful, the bandmates say they are respectful to each other and coming together to do what they love.

“In the end we’re all friends,” Morrison said.