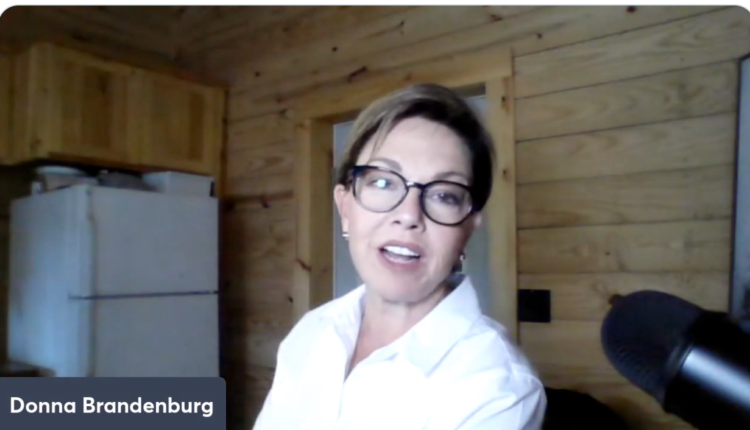 One of the five gubernatorial hopefuls that were tossed off the Aug. 2 Republican primary ballot over a massive election fraud scandal says she will run instead as a third-party candidate.

In a video posted to social media Friday afternoon, businesswoman Donna Brandenburg announced she is running for governor as a candidate for the U.S. Taxpayers Party of Michigan, an affiliate of the national Constitution Party, which the Southern Poverty Law Center has flagged as an extremist group.

“We have a very clear shot right now to November,” said Brandenburg. “So we go right past the primary and I’ll be on the ballot in November, which is very, very exciting. So to all of my supporters, no worries. I told you I was going be on the ballot.”

Among the stated goals of the U.S. Taxpayers Party of Michigan is rescinding the 17th Amendment to the U.S. Constitution that allowed for the direct election of senators, prohibiting abortion without exception, opposing “any form of comprehensive immigration reform, a codeword for amnesty,” and privatizing the Social Security system.

Brandenburg also said she had chosen Mellissa Carone to be her pick for Lieutenant Governor. Carone, who gained national attention as the star witness in Rudy Giuliani’s baseless claims of fraud in the 2020 presidential election, was previously disqualified to run for seats in both the Michigan House and Senate due to filing erroneous campaign finance affidavits.

Mellissa Carone speaks at a right-wing rally calling for a so-called “audit” of the 2020 election at the Michigan Capitol, Oct. 12, 2021 | Laina G. Stebbins

“Both of us were illegally removed off the ballot,” claimed Brandenburg, without evidence. “And I want to be standing next to someone who has been fighting for election integrity and fighting for this state and this nation, as hard as anyone could possibly do it.”

Brandenburg, along with Craig, businessman Perry Johnson, financial adviser Michael Markey and Michigan State Police Capt. Michael Brown, were removed from the primary ballot after the Bureau of Elections (BOE) released a report detailing an “unprecedented” number of fraudulent signatures on their petitions.

Nominees of the state’s minor political parties, which also include the Working Class Party, Libertarian Party of Michigan, Green Party of Michigan and the Natural Law Party, are not required to go through the primary process, and instead simply inform the Secretary of State of their selections for placement on the November ballot.

Brandenburg’s decision fulfills a scenario laid out to the last month by Steven Liedel, a former counsel for Gov. Jennifer Granholm who’s now with the Lansing-based Dykema law firm in Lansing, specializing in election law.

Disqualified GOP gubernatorial candidates have options to get on the ballot

Liedel said seeking a minor-party nomination presents the fewest technical obstacles than the other two possibilities, either running as an independent or seeking a write-in campaign as former Detroit Police Chief James Craig is attempting.

In making her announcement, Brandenburg said while she was glad she had taken the opportunity to run as a Republican, she no longer wanted to participate in what she called a “pay to play” corrupt system.

“The corruption is so deep,” she said. “It’s incredible. So we got to the point of filing the second lawsuit in the federal court. And I truly made up my mind that no matter which way that judgment came down from the judge, I was going to tell them all to shove it and jump off that party anyway…because I wouldn’t even stand on the same stage with these people. Not only are they corrupt, they have no interest in fixing this state. So it was time to go big or go home.”

“They [the GOP] have completely failed us when they removed people illegally from the Republican Party, never stepped in to defend anyone. They threw us off with no defense. They did not defend President Trump [in the] 2020 election. It was a complete abandonment of candidates other than the ones that they wanted to sit at the top with the people that are sitting at the top and the leadership of the GOP. So if they didn’t defend us, why should we have any concern for them? They totally abandoned us and they totally abandoned President Trump.”