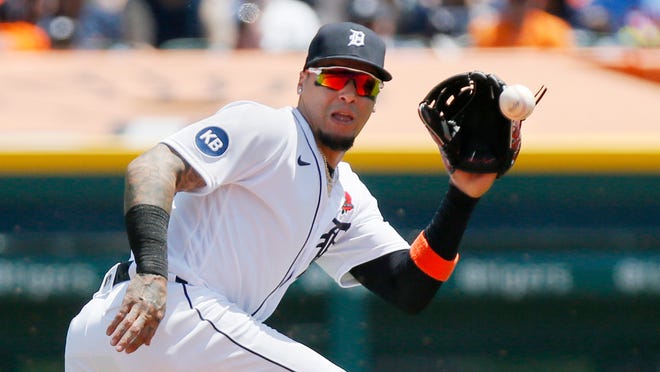 Detroit Tigers rookie Spencer Torkelson dribbled a grounder between first and second base with two outs in the seventh inning. Minnesota Twins first baseman Jose Miranda tracked down the ball, but his throw to relief pitcher Joe Smith, running to cover first base, resulted in an error.

The Tigers scored two runs with two outs in the seventh, all thanks to that error, to help produce a 7-5 win over the Twins in Monday’s five-game series opener in front of 15,191 fans at Comerica Park on Memorial Day.

Detroit improved to 18-29 with four wins in their past five games, now 10 games behind Minnesota for first place in the American League Central. The Tigers scored at least seven runs for the first time since April 23 and for the third time in 47 games this season.

On Miranda’s throwing error, Jeimer Candelario scored from second base for a 5-4 advantage, while Torkelson easily advanced to second base. Willi Castro’s ensuing single scored Torkelson to go ahead 6-4.

Before scoring, Candelario reached second base on a fielder’s choice, as the Twins cut down Jonathan Schoop — who tripled for the first time this year — in a rundown between third base and home plate for the second out.

TIGER’S NEWSLETTER:Time to check the warranty on these Tigers hitters

Closer Gregory Soto pitched a scoreless ninth to secure a two-run victory and his ninth save this season.

Schoop missed the cycle by a home run, posting a third-inning single, fifth-inning double and seventh-inning triple. He grounded out in the first inning and struck out swinging in the eighth.

Schoop and Torkelson notched three hits, while a trio of players had two-hit performances: Candelario, Castro and Derek Hill. Baez, hitting .195, finished 1-for-5 with one strikeout.

The Tigers scored their first run in the third inning, thanks to an unlikely source of power. Hill, for his speed and defense, slapped Bundy’s slider for a 355-foot solo home run, good for his first homer this season and the fourth homer in his 88-game career.

But the Tigers weren’t done.

Three Tigers reached safely to open the fourth: Jeimer Candelario (single), Spencer Torkelson (double) and Willi Castro (single). Torkelson’s double — hit with a 109.5 mph exit velocity — to the left-center gap, scored Candelario and cut the Tigers’ deficit to 3-2. Castro knotted the score by driving in Torkelson with a single — hit with an 88.3 mph exit velocity — up the middle and into center field.

The Tigers added to their run total in the fifth, thus completing three straight innings with at least one run scored.

After Báez strikeout for the second out, Candelario dropped in a bloop single to score Schoop, who reached on a one-out double, and put the Tigers ahead, 4-3. Torkelson continued the attack with his second hit of the game, putting runners on the corners. Willi Castro popped out to third base, unable to extend the lead.

Put a beau on it

Through the first two innings, Brieske threw 30 pitches: 15 balls, 15 strikes. He improved his strike-throwing the rest of the way, finishing with 57 strikes on 91 pitches in 5⅔ innings.

A nine-pitch fifth inning saved Brieske from an earlier exit. The Tigers, with a doubleheader Tuesday, needed Brieske to eat up as many innings as possible, and he battled to pitch into the sixth.

In the second inning, Gary Sanchez opened the scoring with a solo home run on Brieske’s second-pitch center-cut fastball. The Twins then put two runners in scoring position with two outs, but Brieske escaped the second without further damage.

A routine two-out grounder from Jorge Polanco to Schoop resulted in a single, as the second baseman took too much time throwing to Torkelson at first base. But Brieske retired the next batter to conclude the third.

The Twins tackled on two more runs in the fourth inning on one swing from Jose Miranda, who hammered Brieske’s hanging curveball 372 feet and beyond the left-field wall for a two-run home run.

Brieske sent down seven batters in a row before a mistake cost him with two outs in the sixth inning. His final pitch, a full-count changeup to Urshela, traveled to left-center field for a solo home run.

Just like that, the Twins tied the game at four runs.

Manager AJ Hinch removed Brieske from his start, as right-handed reliever Joe Jimenez entered. He needed two pitches to retire Miranda for the third out in the sixth inning.