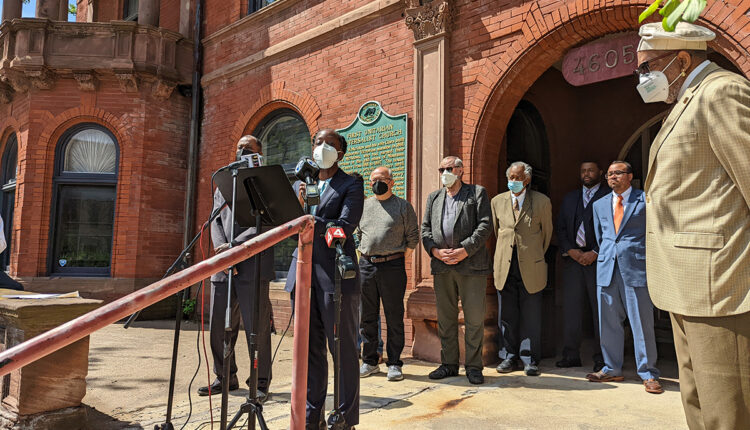 President Joe Biden is directing more federal money toward policing strategies to make communities safer, but activists in Detroit say less of those resources should be poured into crime-fighting here and that violent and discriminatory police practices must be addressed.

Nancy Parker, interim managing attorney for the Detroit Justice Center, said there should be more of a focus on demilitarizing the department and that federal American Rescue Plan Act funding should be “invested in the people.”

“What we need is an investment in the community, investment in our kids’ education, investment and access to water for all residents,” Parker said. “We need employment, we need health care, we need mental health resources.”

Parker and other members of the Coalition for Police Transparency and Accountability (CTPA) also sent a memorandum to the U.S. Department of Justice this month urging an investigation into a “pattern of killings and excessive force” and a culture that “promotes violence and racial discrimination” within Detroit’s police force over the past decade.

CPTA was formed after the controversial police shooting of Detroiter Hakim Littelton in July 2020. Despite video evidence released by the police department depicting Littleton firing a weapon at officers before he was killed, the coalition believes his death was avoidable.

Parker argues the summer of 2020 revealed DPD’s antagonistic relationship with protesters amid more than 100 days of protests in Detroit following the murder of George Floyd at the hands of a Mineapolis police officer.

“Detroit police mobilized tanks and other military hardware against the protesters, their first aid supporters and against legal observers, causing serious physical injuries to many,” Parker said during a press conference this month.

The coalition is amplifying its concerns over policing tactics in the city and the most effective use of COVID aid as the Biden administration ramps up funding for law enforcement throughout the country, including in Detroit. Police Chief James White has touted service improvements tied to the federal aid the city has received, brought on an official to manage diversity, equity and inclusion within the department and vows a “community-first” approach to policing.

Earlier this month, White and Mayor Mike Duggan traveled to Washington D.C. to discuss how $50 million in American Rescue Plan Act funds have and will help the police department. During the visit, Biden’s administration announced that $10 billion in ARPA funds have been committed to public safety efforts across the country. White, who became Detroit’s police chief last year, noted that federal dollars have already helped Detroit place more officers in high crime areas.

ARPA money, the chief said during the White House visit, will also fund state-of-the-art training to meet “standards that are necessary in this day and age in law enforcement.”

In fall of 2020 a group of social justice advocates filed a federal lawsuit against Detroit police, alleging excessive force during protests. In response, a judge temporarily banned the use of force tactics like chokeholds, rubber bullets, batons, shields and sound cannons. That ban remains in place amid an ongoing lawsuit between Detroit Will Breathe and the City of Detroit.

The Board of Police Commissioners, the city’s civilian oversight board tasked with holding the police department accountable, also made changes to the police use of force policy, including banning chokeholds and the firing of weapons from a moving vehicle.

Parker said CPTA has sought to have concerns about the department addressed by Michigan Attorney General Dana Nessel, Detroit’s Board of Police Commissioners, city leaders and the Wayne County Prosecutor’s office.

“Nevertheless, there has been no meaningful effective response, leaving (the coalition) with the sole remaining option of requesting federal intervention,” she said.

This isn’t the first time that the Department of Justice was asked to investigate DPD. Back in 2003, the city entered into two federal consent decrees after officers were accused of using excessive force and unconstitutional policing. The federal oversight was lifted in 2016 after the city and police department met all of the justice department’s required goals.

Since then, Detroiters have continued to file use of force complaints against officers alleging misconduct similar to what landed the city under federal oversight.

Mark Fancher, staff attorney for the Racial Justice Project at the ACLU of Michigan, said despite 13 years under a consent decree, more change is needed for Detroit’s police department.

“We’re not experts in law enforcement, we just know it didn’t work,” Fancher argued. “It was in effect for 13 years and after they left, things got worse.”

White was an authority figure in the department when the federal government had oversight of DPD and he returned after he was tapped to head the Michigan Department of Civil Rights. Harper said that White and his administration are committed to transparency and accountability.

“This community desires safety, constitutional policing, and a community-first approach to law enforcement,” Harper said. “This is why the Detroit Police Department is firmly committed to its mission to encourage thoughtful decision-making and a strong sense of community responsibility.”

Earlier this year DPD hired Mary Engleman as the department’s Diversity, Equity, and Inclusion Executive Manager. Engleman, like White, has experience in the state’s Department of Civil Rights. Harper said Detroit police want to disrupt the “pipeline to prison” through programs like “Crisis Intervention, CeaseFire, procedural justice seminars, and other initiatives.”

White has said ARPA funds have helped expand the department’s crisis intervention program, which connects people having a mental health crisis with the help they need. The initiative was at three precincts a year ago and has expanded to six precincts. The ARPA funds, White said, should allow for the program in all 12 of the city’s police precincts by the end of this year.

“What that does for us is provide a very specific layer of safety not just for the officers, but for the citizens who are in a mental health crisis by having a trained mental health professional in that car with a trained officer,” he said during the White House visit.

DPD has made plans to use ARPA dollars to expand the use of the gunshot audio detection system ShotSpotter and the city requested bids for vehicle recognition cameras at 75 intersections.

DPD is seeking bids for mobile surveillance towers for major events and crowd management and mobile speed signs to increase driver awareness in high traffic areas. The department is also planning to add 50 mid-sized police sedans, a fixed wing aircraft and a new engine for its 1872 Bell OH-58A helicopter to increase traffic enforcement.

Parker said federally funded policing initiatives aren’t going to stop crime in Detroit. That money, she reiterated, should pay for services like home repairs or to aid residents who have been overtaxed.

authored by
First published at https%3A%2F%2Fwww.bridgedetroit.com%2Fcoalition-opposes-more-federal-money-for-detroit-policing%2F