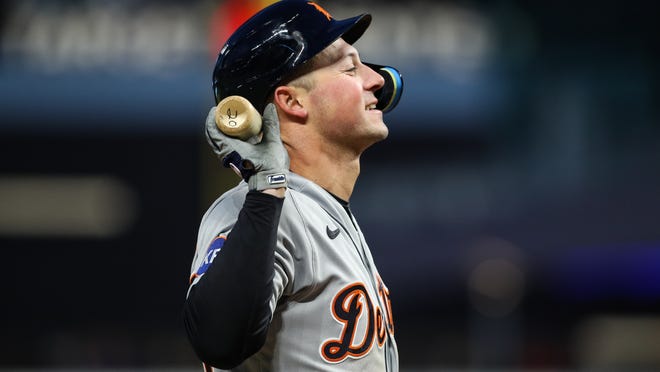 A member of the Minnesota Twins for three seasons, Pineda took the mound for the Detroit Tigers on Wednesday at the place he used to call home. But the Twins were ready for him, crushing three home runs in five innings.

One long ball would’ve been enough.

The Tigers lost to the Twins, 5-0, in the second of three games.

“They’ve outplayed us,” Tigers manager AJ Hinch said. “Not having any opportunities to fight back or punch back is the toughest part of the night. Quick turnaround. We’ll play tomorrow.”

WHAT COULD HAVE BEEN:Carlos Correa answers why he turned down Tigers’ free agency offer

Detroit’s hitters combined for two hits and one walk, as Twins right-hander Joe Ryan fired seven scoreless innings with nine strikeouts. Robbie Grossman was the only Tiger to reach second base. He doubled in the ninth inning.

THE BULLPEN:Tigers’ Andrew Chafin ready to ‘throw up zeros’ in return from injury

Max Kepler blasted a solo home run to left-center in the second inning on Pineda’s 88.4 mph fastball on a 1-0 count. Kepler, again, went deep to center for a solo shot in the fourth inning, belting an 85.4 mph changeup on another 1-0 count.

In the sixth, Ryan Jeffers drilled a two-run homer. Pineda got ahead 0-2 in the count with back-to-back fastballs that were fouled off, but his fifth-pitch 90.1 mph fastball sailed over the left-field wall.

“I tried to win the game for my teammates,” Pineda said. “I tried to execute the pitches, and I missed a couple fastballs and one changeup. That’s the game. For me, I think I threw the ball really well, but I missed my location for three pitches. They did damage.”

Ryan, making the ninth start of his MLB career, dominated. His blemishes were a second-inning walk to Spencer Torkelson and fourth-inning single to Miguel Cabrera.

“You look on the board, and (his fastball is) only 92-93 (mph), not overwhelming,” Torkelson said. “But from that arm slot, it plays up a little bit, and then he has some good off-speed to go with it.”

Torkelson drew a seven-pitch walk, while Cabrera drilled a first-pitch slider for a single into left field.

Ryan, 25, primarily relied on his fastball and slider. His fastball, in particular, kept the Tigers from getting comfortable. The offering produced nine of his 15 swings and misses, along with 11 of his 15 called strikes.

“He definitely established his fastball,” said Torkelson, who finished 0-for-2 with one walk and one strikeout. “I don’t think he threw me an off-speed pitch in the (strike) zone. That was just show to get me off the fastball. Personally, I saw him well and am happy with how I saw him. I just didn ‘t have the results I wanted.”

Although Pineda hung around for five innings, he allowed four runs on seven hits (three homers). He didn’t concede a walk and struck out two batters, throwing 47 of 65 pitches for strikes.

For his 65 pitches, Pineda used 40 four-seam fastballs (62%), 15 sliders (23%) and 10 changeups (15%). He picked up nine swings and misses: four fastballs, three sliders and two changeups. He also had six called strikes, but zero of them with his slider and one with his changeup.

The Twins averaged a 95 mph exit velocity against him.

“He looked really, really sharp today, except for a couple mistakes — and they didn’t miss them,” Tigers catcher Eric Haase said. “When he was locating, there were some really ugly swings and some quick outs. Unfortunately for us, every mistake he made got hammered. That was the difference in the ballgame.”

An interesting call and some sharp defense

Grossman appeared to record the Tigers’ first hit against Twins starter Joe Ryan with two outs in the third inning, as he executed a bunt toward third base and reached safely. The Twins didn’t even attempt a throw to first base.

But home plate umpire Ryan Blakney called Grossman out on batter interference. The umpire ruled Grossman was in fair territory when he bunted.

In the fourth, Cabrera picked up his team’s first hit with a single on a sharp grounder. The 39-year-old finished 1-for-3 with one strikeout. He has 3,003 hits in his 20-year MLB career.

Before Cabrera’s single, Báez hit a rocket at Twins shortstop Carlos Correa. He made a sliding back-handed pick and threw out Báez at first base. The ball was hit with a 107.3 mph exit velocity.

Báez completed a dazzling play of his own in the sixth, making a glove-flip to second baseman Jonathan Schoop on a ball fielded up the middle to start an inning-ending 6-4-3 double play.

Following Pineda, the Tigers turned to three relievers for the final three innings: right-hander Will Vest in the sixth, left-hander Andrew Chafin in the seventh and righty Drew Hutchison in the eighth.

Chafin gave up back-to-back doubles to begin his Tigers debut, but he bounced back with three consecutive outs to avoid further damage. The double from Jeffers put the Twins ahead 5-0. To get the second out, Chafin struck out Byron Buxton looking with a 91.4 mph sinker.

“He found his sinker towards the end of it,” Haase said. “That’s his game, locking guys up and getting some weak contact. Maybe a little rusty his first hitter or so, but he snapped right back in there and made some good pitches towards the end.”

The Tigers signed Chafin to a two-year, $13 million contract in March.

He tossed 14 sinkers, three four-seam fastballs and one slider in his first outing.

“We wanted to get him into the game as quickly as possible,” Hinch said. “It’s not an ideal situation for him when we’re doing. We want him to be a leverage reliever. It was good for him to get his first game under his belt.”